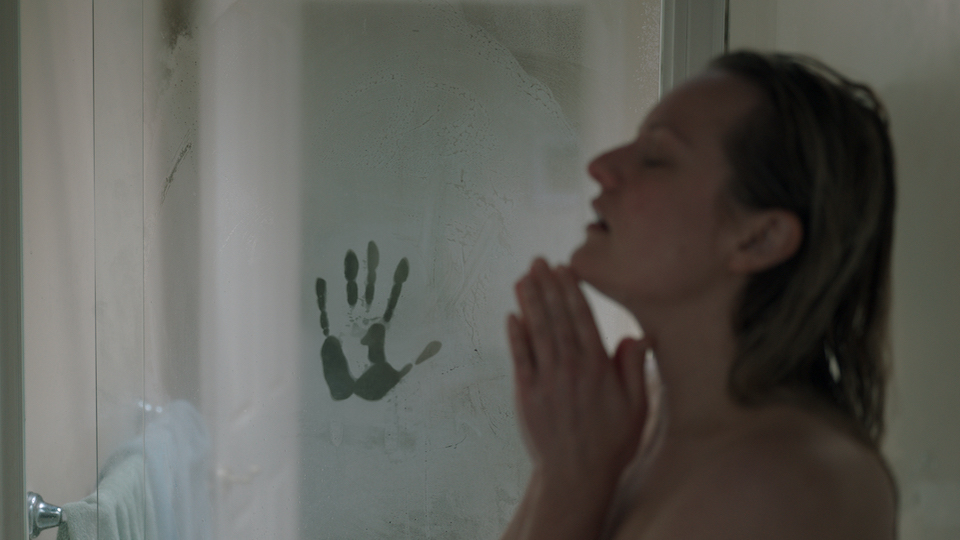 From H.G. Wells’ original novel, and all through the multitude of film and TV adaptations, The Invisible Man has invariably been about a scientist driven progressively insane after an experiment to turn himself invisible can’t be reversed. This terrific and thrilling latest version—written and directed by Leigh Whannell—takes the story away from his perspective, re-framing and refocusing it on his victim, and gives the film a vivid new slant. Apart from a few sleazy moments in Paul Verhoeven’s Hollow Man, no one has ever capitalized on just how creepy and truly scary the concept of this story is.

The film begins in nail-biting fashion, with Cecilia (Elisabeth Moss) attempting to escape an abusive relationship in the middle of the night. There’s no backstory or setup, and we don’t need any. Everything you need to know about this relationship can be read in Moss’ expressive face, and the terror in her eyes as she silently steals away from her abuser (tech billionaire Adrian Griffin, played by Oliver Jackson-Cohen).

Taking refuge in the home of her friend James (Aldis Hodge) and his teenage daughter Sydney (Storm Reid) Cecilia learns that Adrian has committed suicide. This should give her the closure she needs to heal and rebuild her life, but in the days that follow she becomes convinced that there is a presence in the house, watching her. Increasingly strange things begin to happen. Objects move. Doors open. It feels like she is being stalked, but no one believes her, making her doubt her own sanity.

It’s a bold angle from which to approach the story. Whannell’s incisive and timely screenplay makes the film as much about domestic abuse, stalking, toxic masculinity, and gaslighting, as it is about an invisible man. At times it can be emotionally grueling, and will certainly be triggering for some viewers, as it tackles such challenging material. Whannell balances it perfectly however, so that even through all the psychological torment Cecilia endures, the film is never anything less than thrillingly entertaining.

And when it thrills, man alive, it does so in style. Ever the horror maestro, Whannell delights in teasing us with the fear of what might be there. The camera slowly moving away from the action, to focus on nothing is incredibly effective. It reminded me of the first Paranormal Activity film, where you spend so long staring at a static image that the tension builds as you wait for the slightest thing to happen. Sometimes it doesn’t. Then it does, and the breath you’ve been holding escapes with a scream.

There are some terrific jump scares in The Invisible Man, and they feel earned through how well the characters have been established, and how well the sense of dread has been built. There is one absolute all-timer ‘gasp’ moment. One of those rare occasions where the entire audience sucks all the air out the room, in pure shock at what they have just seen. If you were lucky enough to see this at a packed cinema before the coronavirus came and changed our lives immeasurably then you will know what I mean.

In true Blumhouse fashion, the film was produced on essentially a micro-budget, but as ever, you wouldn’t know it. Through ingenious camera work, subtle sound design, terrific practical effects, and exquisite use of negative space, Whannell squeezes every last penny of that budget into producing a top tier slice of blockbuster horror. But even with the all the technical proficiency on display, it requires a mighty performance at the heart of the film to make it work.

She’s in nearly every scene of the film, and often it’s just her and an empty (or is it?) room, but Elisabeth Moss is at her sensational best here. She plays Cecilia with incredible empathy and vulnerability, but there’s a steeliness there too, a gutsiness to survive. It’s another tremendous performance from one of the finest character actors working today. Put this performance in a period drama and release the film in December, and she’d be a shoo-in for an Oscar.

The blu-ray disc comes with 14-minutes of deleted scenes and a feature length commentary with writer-director Leigh Whannell. Director’s Journey with Leigh Whannell is a 10-minute video journal documenting the 40-day shoot. There are lots of great clips in here, revealing how they shot some of the film’s remarkable sequences, including the kitchen fight scene with the remote-control camera.

Moss Manifested is a short interview with Elisabeth Moss intercut with the clips from the film, and behind the scenes footage. The Players is another short featurette, with interviews with the cast and filmmakers discussing and analyzing the film’s characters. Finally, there is Timeless Terror, with Leigh Whannell talking about the process of reimagining this classic story.