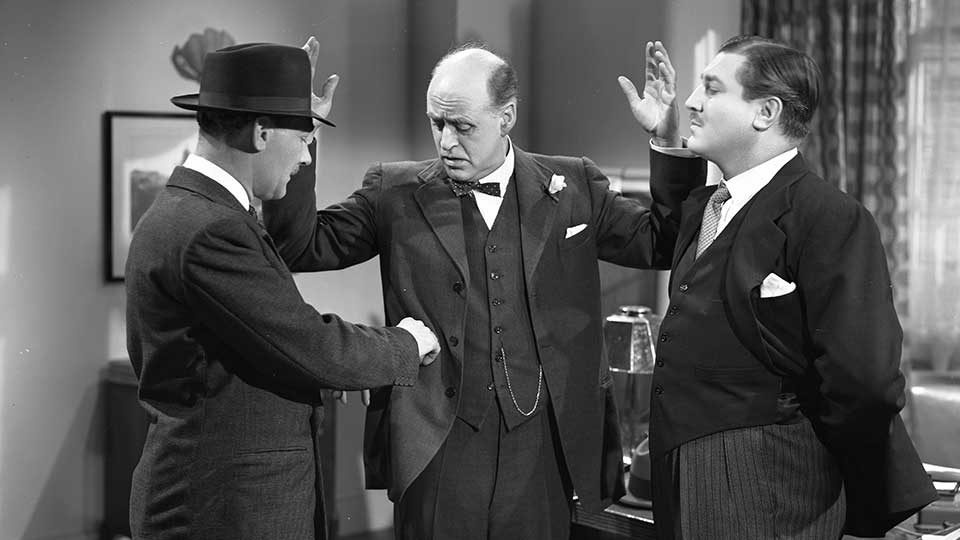 The 1951 classic Laughter in Paradise boasts a cast and crew of stellar talent. Alastair Sim (Scrooge, The Belles of St Trinian’s) leads the ensemble in a bright, sparkling and very British comedy.

When a wealthy old man, renowned in life for his love of practical jokes, dies childless, he leaves his estate to his nearest descendants. However, to satisfy the conditions, before they may claim their slice of the fortune, they must each perform an act that will take them out of their comfort zone. Naturally, this leads to plenty of good-natured comedy of manners material in which each beneficiary is given their chance to shine.

Have a look at the cast list to see a line-up that any director back in the golden age of British film would have given their eye teeth to work with. Alastair Sim takes the lion’s share of screen time as Deniston Russell. He is, as always, effortlessly brilliant. Understated, but always compelling, Sim’s dour features shift almost imperceptibly to convey depths most actors could only dream of. He shares many of his scenes with Joyce Grenfell, the celebrated comic talent who was blessed with a distinctive face and voice rather than radiant good looks. Their ten-year engagement is as the result of Deniston’s shameful secret: outwardly, he is a respectable retired army officer, but unbeknownst to anyone other than his secretary (Beatrice Campbell), he’s really the author of cheap adventure fiction. To claim his inheritance, Deniston must spend twenty-eight days in prison. Yet this proves easier said than done, especially after he befriends the local police sergeant (Leslie Dwyer).

Other members of the cast similarly play archetypes. George Cole (who later had considerable success in Minder) plays a hapless and nervous young man tasked with holding up the bank he works for, though he is terrified of his manager. Agnes (Fay Compton) must work as a maid, and ends up at the service of a curmudgeonly old Scot (who else but Dad’s Army’s John “we’re doomed!” Laurie?) Simon (Guy Middleton), a penniless womaniser, must make an honest woman of the next one he speaks to. Look out for a scene in which he sneakily talks to a waitress – she’s played by none other than Audrey Hepburn, making her screen debut.

Of course, as the shenanigans progress, it’s clear that each character is learning a lot about themselves as they perform the various tasks their benefactor has set them. The story (co-written by Michael Pertwee – brother of Dr. Who’s Jon Pertwee, who also takes a minor role in the film) unfolds in a completely predictable manner, with each character getting something of what they deserve, and a few twists and turns that nobody will be surprised by. Everything is held up by deft-touch comic performances and witty dialogue. It’s not drama that sustains for long, and thankfully the film comes in at little over an hour and a half. Having said that, it’s quite a feat to tie up so many loose ends, and Laughter in Paradise is nothing if not neatly and concisely plotted. It’s easy to see the whole thing transposed for the stage.

Laughter in Paradise harks back to an England that no longer exists, allowing the indulgence to imagine that it ever did. Undoubtedly now a period piece, the nostalgia value is helped along by a now-entirely deceased cast, many of whose names live on as cultural icons in our hearts and in the nation’s psyche. The film has been restored for this release as part of Studiocanal’s Vintage Classics Collection. It boasts good picture resolution, though the audio track is clear, but remains reflective of its age.

Extras on the disc include a fifty-minute audio recording of Alastair Sim’s address as Rector of Edinburgh University in 1949. It is a quaint custom in Scottish universities. You’ll also find a short public information film featuring two of the stars – Alastair Sim and George Cole, which dates to 1943. For ‘making of’ buffs, there’s a twenty-minute analysis of the film by omnipresent funnyman Stephen Fry.