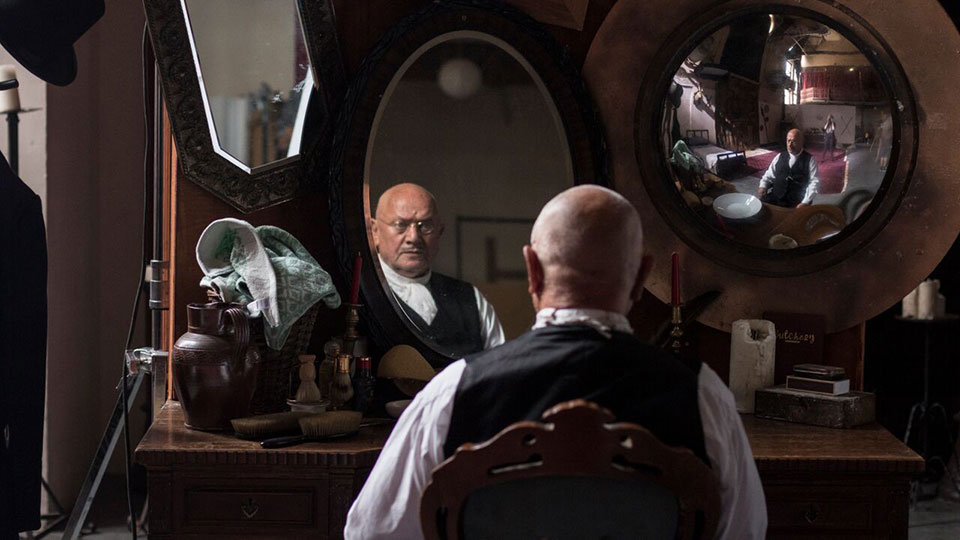 Steven Berkoff has been working in the entertainment business for over sixty years.

He has consistently pushed acting boundaries whether it be on stage or on film. He is equally comfortable in either medium. His stage productions have garnered huge acclaim including his productions of Franz Kafka’s Metamorphosis and The Trial also Oscar Wilde’s Salome. His feature film acting has been wide spread. Most might know him as Victor Maitland in Beverly Hills Cop or Orlov in Octopussy or King Olaf the Stout from TV’s Vikings. Berkoff, even at 82 years old, is never one to rest on his laurels.

Now he has combined his two loves, stage and screen, to star in a feature film adaptation of Edgar Allen Poe’s The Tell-Tale Heart and I spoke to him to find out more about it.

How did you set about adapting Edgar Allen Poe’s short story into a feature length film?

It came about through one of those little accidents in the industry. I met a very, typically seedy producer who was looking for someone to write or direct something and he was interviewing a couple of directors and so the seedy guy disappeared into the seedy world and I chatted with the director that I had never met before. He was one of the other victims and was let down by him [the producer]. So, we decided to do something together because he had raised a bit of money. We discussed various things, and I suggested the Tell-Tale Heart because it is such a dynamic and utterly compelling piece. Not too long. Very straight forward and very simple. Yet, at the same time, full of absolutely terrifying observations. So, we decided to do that. We adapted it for the film. We looked for a set and in the end we used the incredible Union Chapel in Islington, which is like an old Gothic church. That became the setting. It all suddenly came together. It felt very good doing it. Film is like an expansion. It is like a microscope as you look at things with great detail. That’s what we tried to do.

You had previously performed it on stage in 2011. So, was it easy for you to get back into the mindset of Poe’s work?

Completely. It has been with me the whole time. I particularly love that character and so, therefore, I had a great deal of sympathy & understanding and even a particular connection because this man was very, very disturbed. Hyper-sensitive. Suffering from the morbid sensitivity through all his senses. His sense of sound. His sense of smell. Taste. Everything. It is a kind of prototype that is used in many of his (Poe) works, particularly The House of Usher. That appealed to me. This is what happens so often with people who suffer from a form of mental disability or psychosis. The little, tiny wean-y things drive them mad. I’ve had that. Tiny, wean-y things can throw you into a spin until you manage to overcome it. Inside most people there is one area that they are most vulnerable and that is what is so fascinating about Poe. He speaks to everybody but in a highly magnified way. Today it is called OCD, Obsessive Compulsive Disorder. It was prescient of him to detect this as a disorder and made it quite dramatic.

The actual short story is about obsession and madness. For you as an actor, do you feel the need to go to those places in-order to fully understand the character?

I feel I have an automatic empathy. As actors you are working on the edge of your nervous system and also it is like a light. You shine a light on a particular area of the mind and the more experienced you are as an actor, the more you’ll scrutinise what is there in a very, very precise way. It is a scrutiny. Some actors have this in spades. When they have a word they emphasise, they illuminate it to reveal something else. But that is very rare in actors nowadays. Now they just say the F-ing lines and don’t know what they are talking about.

As you are the centre of the film does that give you the scope to try different inflections in the character and the dialogue?

Oh yes! I had a lot of it set in my mind and I might have gone a slightly different way to Steve Cookson (the director). I went along with him in a peaceful way. Sometimes I would have a scene I would just continue. I would be re-writing or adding to Poe in improvisational moments. When I was doing the improvisation it felt totally real to me as the character. He (Cookson) just kept filming till I stopped improvising. I found that very satisfying. When you are improvising it is always perfect because you are not remembering, struggling or thinking about words. It just flows out of you in all the most bizarre inflections or gestures or mannerisms. We did a lot of improvisation as it had to be a bit longer than the short story. When you read it, it is about twenty minutes. We had to turn it into an hour and twenty minutes. Which was wonderful.

Throughout the film you break the fourth wall quite a lot. Was that a conscience decision from you to do that?

We both discussed it and was not sure what to do because I’m speaking out loud and I’m speaking to myself. I didn’t want a voiceover. Although that could have worked quite well. But instead I decided to say it as if this was the only way I could express myself. I found a certain amount of comfort by doing that and it seemed to work.

I think it is a little bit of a blur. Two different mediums but quite connected. But having slightly different purpose. With a film you can get very, very detailed and very intimate and that is wonderful if you can use it. That is brilliant. I don’t want to mention any other company but I saw some shit the other night on television by one of the theatres. They had a good actor but it made no use… the camera was like twenty yards away. They were filming it as a theatre piece and they came in once or twice but they so misused it or abused it that they didn’t know how to use it. We didn’t get the benefit of it at all. There is a fine line. You must really be close to the camera. You must whisper to the audience. In theatre, somebody once said to me when I was doing a play, “oh, you are still shouting at night.” That’s what you do “shouting at night.” It is a wonderful expression because that is what it is like.

You mention about film and I want to ask you about Beverly Hills Cop, as that was your first big Hollywood blockbuster. What was that like as an experience?

It was quite wonderful. I was already there. I was doing a play. One of these small fringe theatres in Hollywood where it has ninety-nine seats and you just do it for wages and Bed & Breakfast, and they were casting and a very smart casting woman happened to have read that I was in L.A. and I had just done Octopussy, so I had a tiny bit of a reputation. I met the director (Martin Brest) and he thought ‘Oh, English! That could be good’. We got on very well and he cast me. I slide into it with ease.

A few years after Beverly Hills Cop you starred in Revolution, a big British film led by Al Pacino. It ultimately flopped and closed down an entire film studio. What was it like being a part of that film?

It is always very exciting to work with someone like Hugh Hudson because he has such a gargantuan imagination and desire to create epics. I thought Greystroke was astonishingly good. So it was fun to be in (Revolution). But where it got trapped was it was too much on Pacino. He was not rightly cast for it I don’t think. When you have a big star in the film unfortunately there does tend to be hold-ups. The script isn’t right or a line isn’t right. I was surprised by how much they give to him. He is a superb actor is Pacino. He is brilliant. But doing a kind of period piece was up his street. So if he didn’t like a line he would have to ring L.A., which is eight hours behind us, to ask the writer to knock out a couple of lines. I was going to say “Hey Al, I’ll do it in ten minutes. Give me the script.” So we have to wait until he [the writer] has to get up in the morning. So it is four o’clock in the afternoon before we can continue because he has to bring in the lines. There were a few holdups like that. He (Pacino) was a charming man to work with.

Did you strike up a friendship with him?

We did, yeah. He is a bit of a theatre man. He likes to talk about the theatre and what he did. He was very, very friendly. These major movie stars are not very friendly.

He saw me do it at the National Theatre. He was fascinated. He didn’t even know that Oscar Wilde had written Salome. The language is so weirdly bizarre and seductive and magnificent. He wanted to do it, which he did. Unfortunately, it wasn’t so successful. They did ask me to direct it. But that would haven’t meant I wouldn’t have been able to play Herod, which I had been working in for twenty years.

Did you see the film/documentary that Pacino made about his production? It is called Wilde Salome.

Yes, I saw that. Well, documentaries on flops are always interesting. If you have a flop, make a documentary.

Tying in with your version of Salome and this version of The Tell-Tale Heart and how different they both are to the original text, are you always seeking out new ways to adapt text?

Not always but if something hits me then I’ll try it. Something as to be really unusual and compelling and dynamic and difficult and bizarre. That is what attracts me and then I have to find a way of doing it.

Are there any classic literary pieces that you would love to adapt?

There are one or two. I was fascinated for years about a play called The Hairy Ape. I offered it to many people but I didn’t get any response. So, I did it in America about four years ago and it was a major success. The Hairy Ape, I think, is one of the greatest plays of all time. It’s extraordinary. It speaks to me. Everything about it speaks to me. I’m looking to do it here (in the UK). There are always things that one can adapt. I’d quite like to now do The Fall of the House of Usher on film. That would be fascinating.

Advertisement. Scroll to continue reading.
In this article:Steven Berkoff