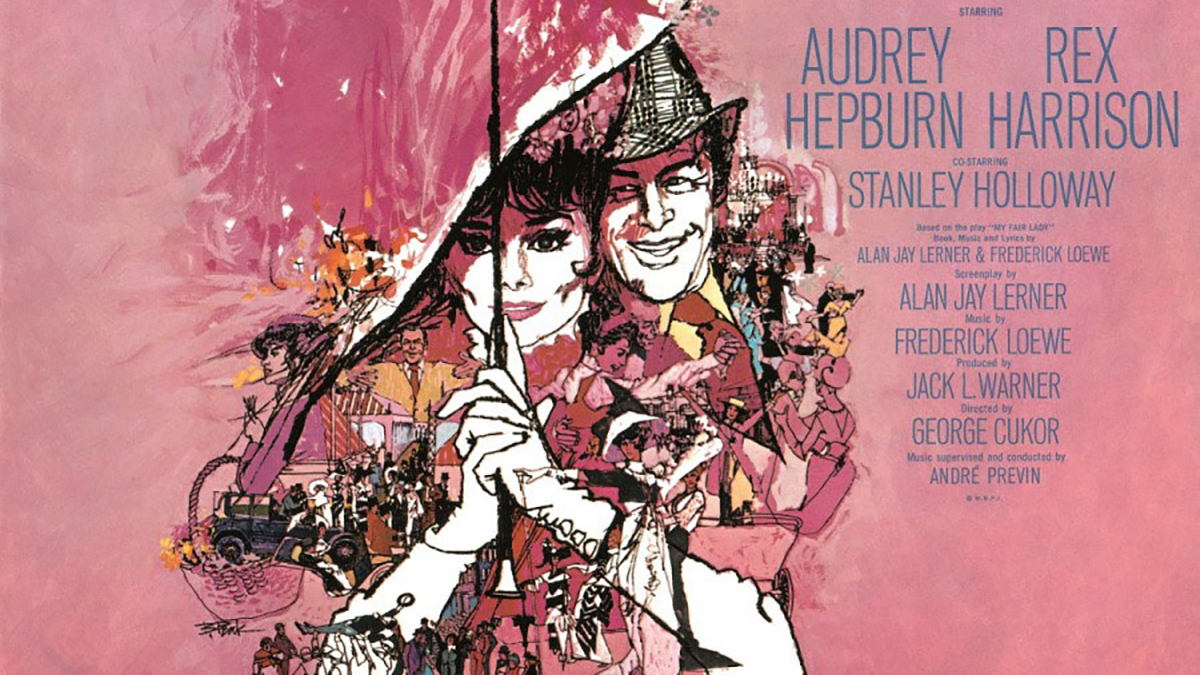 Although ‘My Fair Lady’ started life in the 1950s as a musical for the stage (based on George Bernard Shaw’s play ‘Pygmalion’), its songs became ingrained in popular consciousness after the hit 1964 Hollywood movie brought them to a much wider audience. The delightful pairing of English cad Rex Harrison as Professor Henry Higgins and the elfin-like Audrey Hepburn as Eliza Doolittle proved a box office smash.

Since much of the film is told through song, the soundtrack spells out most of the story. Professor Higgins takes a bet that he can turn a common East End flower girl into a regal princess who can slip seamlessly into high society. Eliza Doolittle is brought into his world, given elocution lessons and taught how to comport herself. The beautiful young woman attracts all manner of admirers in the process. However, her life ceases to become her own, and she grows resentful of being Higgins’ plaything.

The story is charming and has an innocent, fairytale quality to it, and the music (lyrics by Alan Jay Lerner and songs by Frederick Loewe) capture this magical essence perfectly. There is a wide array of musical styles thrown into the mix, from romantic to fast-paced music hall and the delightful Cockney knees-up of ‘Get Me To The Church On Time’.

The film used innovative microphone techniques to enable Rex Harrison to ‘speak sing’ his songs, which he employed to brilliant effect. His precise diction and rasping delivery make for a memorable and commanding performance, which is beautifully captured in this soundtrack. Although Henry Higgins is meant to be arrogant, brash and condescending (and is perfectly played as such by Harrison), some of his deliciously funny lines, especially in ‘Why Can’t the English?’, are likely to fall foul of the offence mongers of today’s overly-sensitive and censorious age, but they should be taken in context – Higgins is not meant to be an especially sympathetic character!

Most of Audrey Hepburn’s vocals were dubbed by Marni Nixon, but there are excepts of dialogue before or in the middle of songs, so her distinctive tones can be heard on the record. Hepburn’s voice is used in most of ‘Just You Wait’, which opens the second side of the first disc. The same fate befell Jeremy Brett who played Freddy Eynsford-Hill. His love song ‘On The Street Where You Live’ was inexplicably dubbed by Bill Shirley. Although Hepburn struggled to reach the required vocal standard, Brett was a superb baritone. He’s also my favourite actor and somebody I have loved since boyhood for his definitive portrayal of Sherlock Holmes in the Granada series, so it’s an especial delight to hear his supremely articulate voice delivering dialogue on the record.

Although everyone will have their favourite song, mine has to be ‘Get Me To The Church On Time’, which features the inventive comic talent of Stanley Holloway, giving it the full Cockney business as Eliza’s old dad singing about his impending nuptials. You can’t help but join in, which is what this sort of feel-good musical is all about. Eliza singing ‘I Could Have Danced All Night’ is one that lodges itself in the head and repeats endlessly with its sheer exuberance. ‘My Fair Lady’ is a soundtrack full of wit, warmth, humour and joie de vivre. These enchanting songs are sure to keep calling you back.

The high quality of the songs and the captivating ‘ugly duckling’ story have afforded ‘My Fair Lady’ longevity. It has enraptured successive generations in the more than half century since its original release. It never loses its charm, no matter how often you revisit it.

This release of the ‘My Fair Lady’ soundtrack by Music on Vinyl is superb. It’s presented over two records, pressed on high-quality purple swirl 180g vinyl, giving it the candy-like look of the movie reflected by the famous illustrated cover art which forms the visually striking album cover. The sound quality is excellent. Great attention to detail has been paid over the gatefold sleeve as well. It recreates the credits and Brooks Atkinson’s history of the musical in between a gallery of photographs of the key hits. This includes Audrey Hepburn and Jeremy Brett together for ‘Show Me’. The back cover depicts Hepburn and Harrison together during the famous ballroom scene. This Music on Vinyl edition is limited to only 1,000 copies, making it an ideal addition to the shelves for collectors.