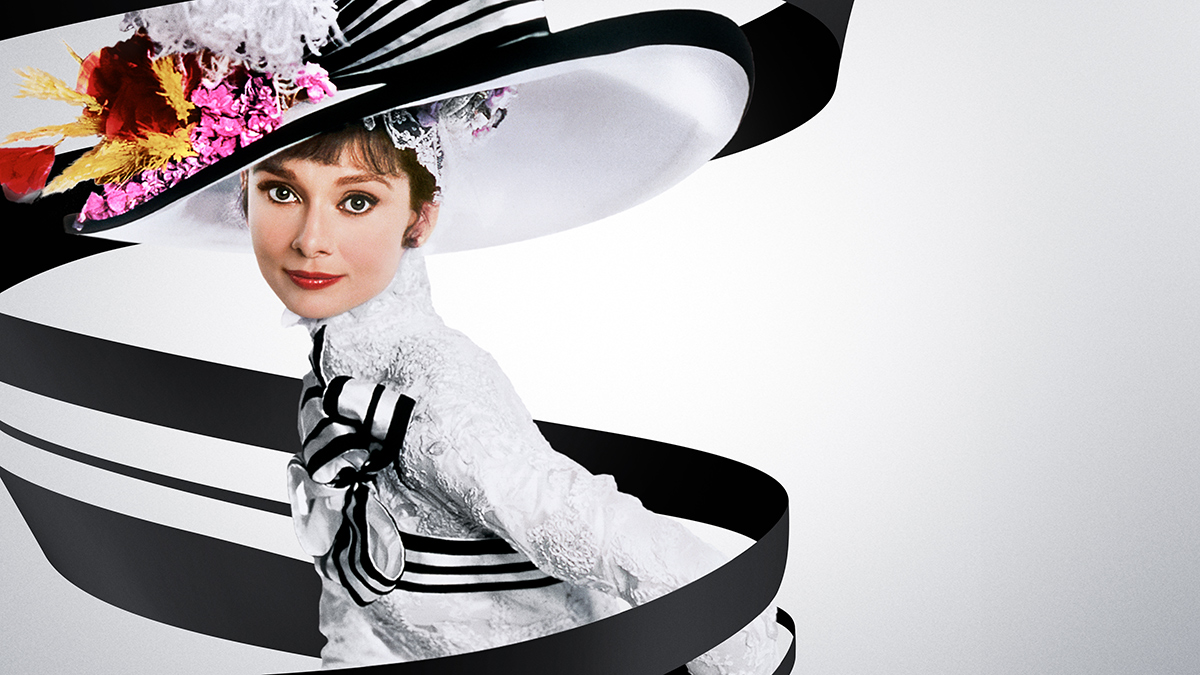 The spectacular 1964 Hollywood musical ‘My Fair Lady’ has been released in ultra high-definition, fully restored from the original 65mm film stock. It arrives looking more loverly than ever!

A winner of eight Academy Awards, including several big ones (Best Actor for Rex Harrison, Best Picture and Best Director for George Cukor), ‘My Fair Lady’ was a critical success and box office smash hit. It has been enchanting viewers since its original release nearly fifty years ago.

Based on George Bernard Shaw’s 1913 play ‘Pygmalion’, and adapted from the 1956 stage musical of the same name, the Hollywood production of ‘My Fair Lady’ finally brought the much-loved story to the big screen, and so to larger audiences. Its sumptuous costumes, set designs and period details are a feast for the eyes, and its stunning star Audrey Hepburn wears some iconic outfits. However, before she gets to dazzle, Hepburn’s Eliza Doolittle must undergo a dizzying transformation. Beginning the story as a working class flower-seller with a broad Cockney accent, Eliza Doolittle is plucked off the streets by phoenetics expert Professor Henry Higgins (Harrison). He has made a bet that he can train and educate her in elocution and deportment so that he can pass her off as a duchess at a forthcoming Embassy Ball. At first, Eliza enjoys the attention and wants to please, but she soon begins to resent being treated as a plaything by the arrogant and snobbish Higgins.

‘My Fair Lady’ is a classic English comedy of manners. As with so many classic tales of English high society, it comments on class differences and the gulf between rich and poor, affording it a strong moral message. George Cukor directs with fine attention to detail, bringing the best out of his actors. Innovative techniques were famously adopted to record Rex Harrison as he speak-sings his lines, so that he didn’t have to recreate them in post-production. It works brilliantly: it’s almost as if Harrison is performing his songs ‘live’.

The amazing cast is one of the best ever assembled for film. Henry Higgins is Rex Harrison’s defining role. He effortlessly embodies the pompous, selfish and high-brow professor. Although the camera always adored Audrey Hepburn, she was rather less convincing when dressed in the rags of the flower-seller, but it’s hard not to find her completely enchanting. Stanley Holloway is in scene-stealing form as Eliza’s father Alfred P Doolittle. His classic Cockney routines for the songs ‘With A Little Bit of Luck’ and ‘I’m Getting Married in the Morning’ are two highlights of the entire film. There’s also a fantastic supporting role for a handsome young Jeremy Brett, who would go on to become the definitive Sherlock Holmes some two decades later. He plays Freddy Eynsford-Hill, the young man who falls in love with Eliza after she shouts obscenities at Ascot.

At almost three hours in duration, ‘My Fair Lady’ is a full evening’s entertainment. It comes together brilliantly by using a combination of intimate character moments as well as impressively-choreographed song and dance routines using dozens of extras. Retaining much of George Bernard Shaw’s wit allows for plenty of comedic moments and touches of levity. The overall effect is that it’s hard not to fall completely in love with this radiant, spectacular and utterly charming film.

This new release packages the film in 4K Ultra HD as well as Blu-ray. The film is stunning and flawless, with vivid colours and great sound. A third disc of extra features includes the ‘More Loverly Than Ever: The Making of My Fair Lady Then & Now’ documentary. It was hosted by Jeremy Brett shortly before his untimely death in 1995, and which recounted the film’s restoration at the time. There are many featurettes including behind-the-scenes footage, trailers and galleries to sate the most enthusiastic of fans. This version of ‘My Fair Lady’ will delight collectors and long-standing fans alike, and bring a cinematic masterpiece to life for a whole new generation.