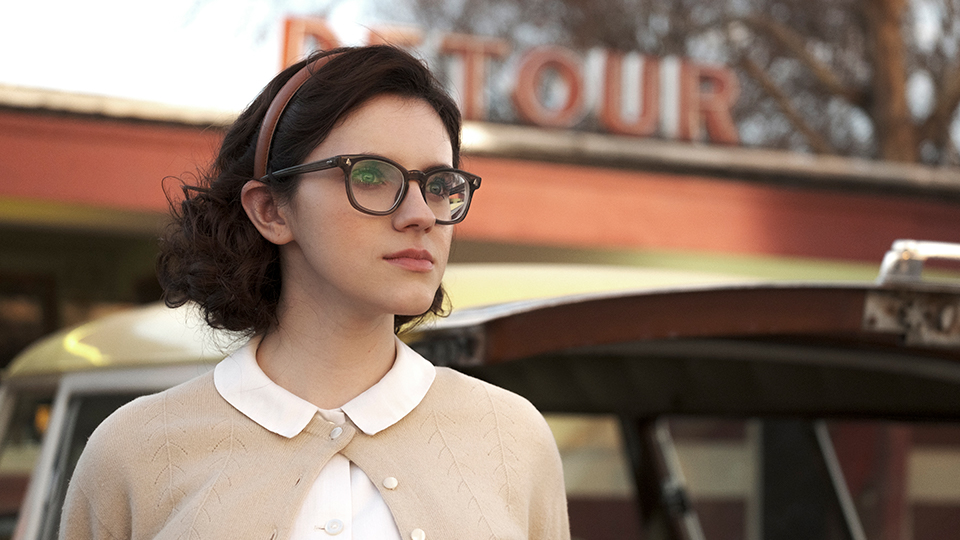 In a small god-fearing town in Oklahoma in the 1960s, Iris Deerborne (Kara Hayward) lives a pretty miserable life. Teased by her the girls and mocked by the boys in her school, she tries to keep a low profile. The arrival of rebellious Maggie (Liana Liberato) changes Iris’ life, giving her a friend and an ally. The two girls form a close bond quickly but as Iris begins to unravel Maggie’s secrets, their friendship is threatened and Maggie has decide whether to step up or stand aside.

To The Stars is a coming-of-age drama that touches upon sexuality, adolescence and the strong bonds teenagers make. Maggie’s arrival into Iris’ life is a dramatic one that removes the need for the girls to find out much about each other before becoming firm friends. Iris is being picked on by a group of boys on a dirt road and Maggie shows up in the nick of time to throw rocks at them and rescue Iris. Having never had anyone stand up for her before, Iris falls under Maggie’s spell but quickly suspects that her new friend might not be the person she portrays herself to be.

The film explores the lives of both girls impressively, pulling the viewer into their worlds. For the most part we see things through Iris’ eyes, and her lack of self-confidence stems from having an alcoholic and verbally abusive mother. In the case of Maggie, she’s full of bluster but shares similar insecurities to Iris, suffering physical abuse at the hands of her angry father Gerald (Tony Hale) as her mother Grace (Malin Akerman) watches on terrified to step in incase his anger gets redirected to her.

As quickly as their friendship begins, cracks appear as Maggie tries to move on from a scandalous past and throws herself in with the popular crowd. Iris is left alienated and angry at her friend but when the scandalous secret is revealed, the two girls switch places with Iris becoming the braver of the two. Writer Shannon Bradley-Colleary does a fantastic job of building Iris up so when the switch comes about, you feel the payoff has been earned.

The two leads – Kara Hayward and Liana Liberato – are superb. There is no doubt this is their film and both actors give noteworthy performances. Together they have a fantastic chemistry, proving to be believable as two seemingly different girls with much more in common than they realise at first. Supporting roles from Jordan Spiro as Iris’ mother and Malin Akerman as Maggie’s mother are strong too, with both women really getting to the grips with the damage their characters have inflicted on their daughters.

To The Stars isn’t a perfect film. It’s a little too long and in terms of a coming-of-age story, it’s not ground-breaking. What it is though is effortlessly watchable with compelling performances that will keep you hooked. As an exploration of female friendship and finding the confidence to be yourself, To The Stars will definitely appeal to the young adult audience that it’s aiming for.