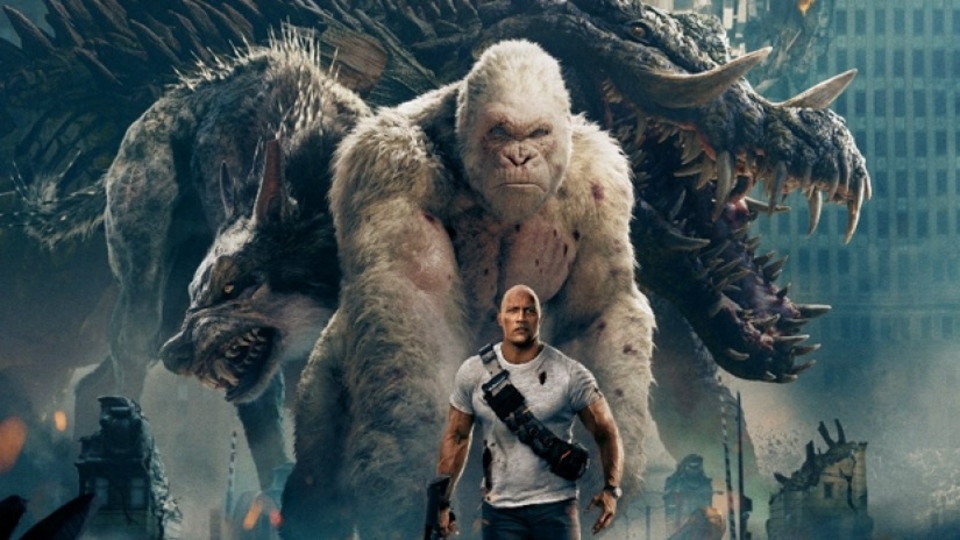 Rampage is exactly the kind of film you’re expecting – it delivers lots of thrills, some great action, solid performances from its cast and is all a bit silly (in a good way). It’s great for a bit of escapist fun and entertains throughout. It might not change your life but if you’ve always wanted to see The Rock vs. a giant gorilla, wolf and crocodile then this is the film for you.

Loosely based on the popular Midway video games from the 80s, Rampage follows Davis Okoye (Dwayne Johnson), a former soldier who now works as a primatologist. After growing disillusioned with people and their constant selfish agendas, Davis prefers the company of animals to humans. He had rescued an albino ape named George from the hands of poachers when he was just little, and George has now grown up to become friends with Davis, communicating with him and constantly joking around.

A mysterious set of canisters crash down from the sky one night and infect a wild wolf in the mountains, a crocodile and George, who is in his animal sanctuary. The next day George has grown more aggressive, and has physically grown exponentially. Davis, with the help of Dr. Kate Caldwell (Naomie Harris) must track down the cure for this infection before George becomes an even bigger problem – something which shadowy government official Harvey Russell (Jeffrey Dean Morgan) is preparing for.

The set-up is simple enough and the bulk of the film focuses on the humans trying to stop a giant gorilla, wolf and crocodile from levelling Chicago, while the manufacturers of this mysterious infection (a pantomime-villain double act of Malin Akerman and Jake Lacy) try to attract their monstrous creations into the city for more destruction. Akerman and Lacy are very entertaining, Harris is solid and you can always rely on Dwayne Johnson to get the job done. But it’s Jeffrey Dean Morgan that needs to be arrested here because he absolutely steals the film. He has the best lines, is fantastically charismatic and demands his own spin-off right from the first time we see him.

Rampage does what it needs to and guarantees a fun night out. Some of the effects are excellent and the novelty factor of seeing George and co. rip Chicago apart never seems to get old. Dwayne Johnson continues his impressive box-office form and really runs with the concept wholeheartedly. But someone please give Jeffrey Dean Morgan a prequel or sequel on his own. The man is truly on magical form here.