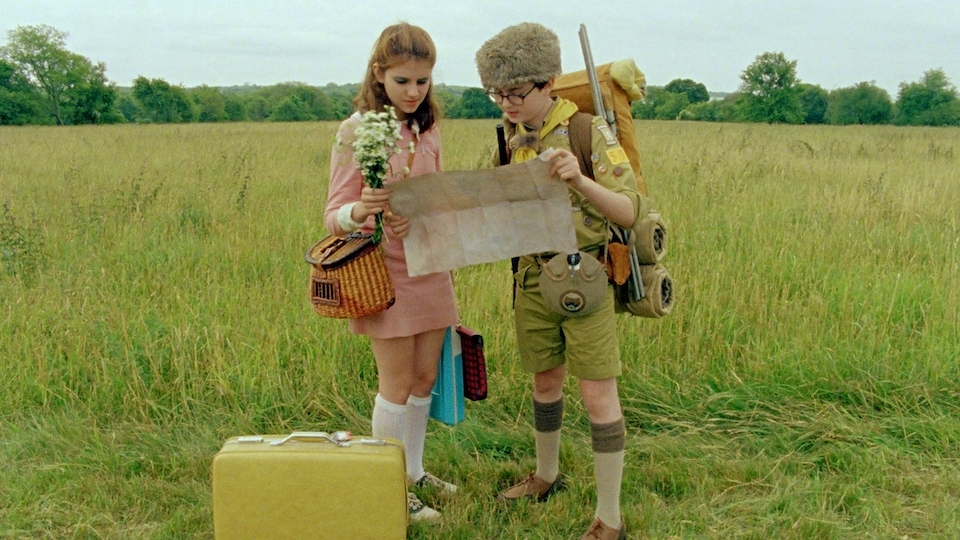 In any other filmmakers oeuvre, Moonrise Kingdom would probably classify as an oddity. But for Wes Anderson, this fanciful romantic adventure fits in perfectly. A favourite director of the Criterion Collection, nearly all of his films have now been given the special Criterion treatment. Beautiful as these releases are however, I sometimes feel that these pristine Blu-rays are strangely anachronistic for Wes Anderson. His films, especially Moonrise Kingdom, look and feel as though they belong on vinyl, and should be played on a vintage Dansette.

With his trademark repertory company of A-list actors in tow, Moonrise Kingdom sees Anderson somewhat depart from his usual themes of privileged ennui and emotionally stunted young men, to tell a story of young love. Just in a very Wes Anderson way. The film is set in 1965, on the fictional island of New Penzance, somewhere off the coast of New England. When teenagers Sam (Jared Gilman) and Suzy (Kara Hayward) run away together, a search party sets out to find them.

The cast are an absolute joy. Gilman and Hayward are terrific as the morose and misunderstood young lovers. It’s also arguable that Moonrise Kingdom marks the last time we ever saw Bruce Willis acting like he actually cares about the film he’s in, before he sailed off into his direct-to-video retirement. The standout however is Edward Norton as Scout Master Ward. A brilliant and charming performance, he is such a funny actor, and not utilised in comedies anywhere near enough.

As ever with Wes Anderson, you either dig his style, or you don’t. From the artifice, theatricality, and proscenium style of framing, to the arch delivery of dialogue and deadpan humour – it’s all here for you either to bask in, or cringe away from the quirk-laden horror he creates. At the risk of repeating myself for the umpteenth time when writing about Anderson, if you have a dislike of whimsy, then stay well away. Personally, this film is very much to my taste.

However you feel about Anderson’s distinct authorial voice, his artistic eye is undeniable. Moonrise Kingdom is absolutely gorgeous. The colour palette of warm ochre and earthy pastels – evoking Norman Rockwell and kitsch Americana – all captured on beautiful 16mm, is simply stunning. It is so aesthetically pleasing it is almost a parody. Without a doubt, this is another absolute triumph of production and costume design from Anderson.

It’s quite an odd selection of supplementary features on this disc, but not unwelcome ones. There’s a feature length commentary track recorded in 2015, with Wes Anderson, Roman Coppola, and actors Bill Murray, Ed Norton, and Jason Schwartzman among others. The Making of Moonrise Kingdom is a fairly extensive behind the scenes documentary, split into four parts, looking at the set design, the storyboards, the auditions, and the miniature models.

Welcome to New Penzance is a fun little behind the scenes featurette narrated by Bob Balaban. Set Tour with Bill Murray is exactly what it says on the tin. Murray is on great form here. It’s only a few minutes long, but you get maximum Murray in that time.

There’s an odd performance montage of Benjamin Britten’s Noye’s Fludde, a piece of music which features in the film. Next up is Eleven iPhone Videos by Edward Norton, which is a gallery of home movies made by Norton on the set, that capture the guerrilla indie feel of the shoot.

Animated Books gives us some more Bob Balaban, who is in character as the narrator (and island librarian) introducing animations of Suzy’s favourite books that she carried with her on their adventure. Finally, there is Cousin Ben, a meta short film featuring Jason Schwartzman in character, introducing a screening of Moonrise Kingdom for the Khaki Scouts.