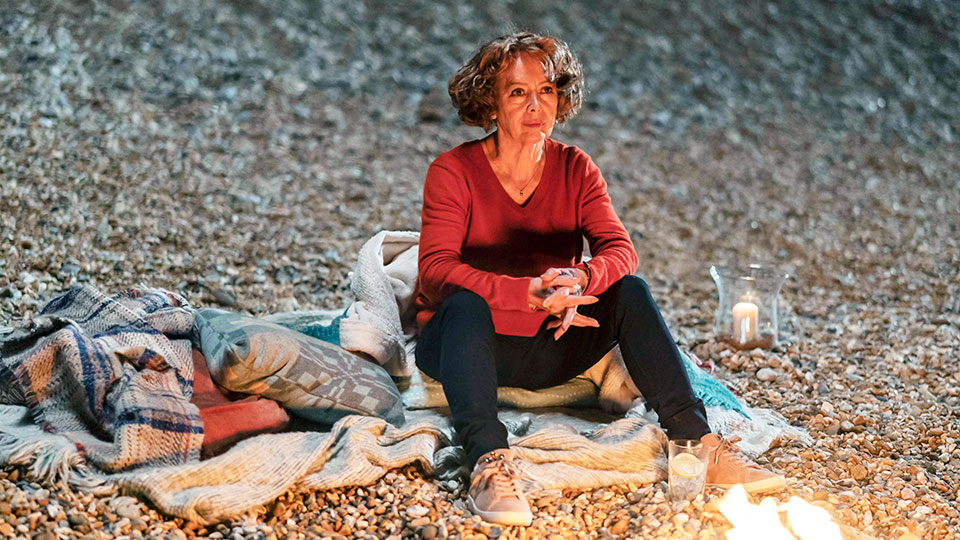 More clues were dropped about who could be in danger of death during tonight’s episode of Flesh and Blood.

The episode opened with Mary (Imelda Staunton) in her greenhouse when she spotted that a ‘For Sale’ sign was being erected at Vivien’s (Francesca Annis) house. Natalie (Lydia Leonard) arrived at the house and asked what was going on.

In the present day Natalie was being interviewed by the police and she told them all the family was supportive of Vivien putting the house up for sale. In reality, Jake (Russell Tovey), Helen (Claudie Blakley) and Natalie were arguing about their mother’s decision. Vivien told them that she was going to Spain with Mark (Stephen Rea) to meet his daughter and then they were off for a six-week trip to India. She also asked her children to clear their stuff out of the house.

As everyone argued, Mary arrived in the house with scones but overheard Vivien saying that she didn’t want to end up like her. She left the scones on the stairs and walked out of the house as Vivien stood her ground with her children.

Jake moved into the flat and was surprised when Stella (Sharon Small) presented him with a contract to sign. She asked for three personal training sessions and two massages as payment for the flat.

At work Helen raised concerns about Meera, who she believed might be a threat to her safety.

Natalie met with Tony (Vincent Regan) and they traded apologies about their last phone call. Tony asked Natalie to give him a week to ‘sort himself out’ and make some big decisions once he had processed the news, claiming that he had to do the right thing by his children.

Mark surprised Vivien with a new car for her birthday, which left her shocked and she told him it was too much for her to accept. Despite her protests, Mark insisted she take it for a spin and Mary watched on jealously.

In the present day Natalie revealed that Mary had given birth to a son who had died and that her husband had walked out on her. As Natalie told her story, Mary let herself into Vivien’s house and snooped around, stealing pills from her bathroom.

When Mark and Vivien returned, Mary was doing some gardening and tried to ask about the house sale. Mark ended their conversation and hurried Vivien into the car so they could head off again.

Jake invited Helen and Natalie over to see his new flat and they were suspicious about how he could afford it. George (Keir Charles) went to the pub rather than accompanying his family and he was joined by the woman who Helen had fired. Vivien and Mark arrived at Jake’s flat and Mark tried to have a chat with Jake, who quizzed him about his extravagant gifts.

Jake’s kids asked if Leila (Lara Rossi) could pick them up and one of them let it slip that she was with a man. George meanwhile spilled his guts to Meera, unaware who she was, in the pub and bought her a glass of wine so they could continue talking.

Natalie was asked by the police about her life and the lives of her siblings. She said she didn’t have much going on but a flashback showed her spying on Tony and his family in their pool.

Jake talked through his family problems with Stella and she told him to apologise to Leila. Natalie tried to call Tony while she was driving and was forced off the road by Tony’s husband who was chasing her in a car.

Helen visited Vivien’s house and spoke to Mary, who was expressing her sadness about the house being up for sale. Mary planted seeds of doubt about Mark to Helen, pointing out that it was lucky he’d been in the right place when Vivien collapsed.

Natalie met with Tony to tell him about his wife’s actions. He promised to leave his wife within a week but Natalie didn’t seem too sure he was telling her the truth.

Speaking to the police Natalie lied about what happened the night of the mysterious incident, and it was suggested a family row had led to whatever it was that had happened.

Helen’s daughter Lily (Grace Hogg-Robinson) was scrolling through Instagram when she saw photos of her father George with a caption claiming he was a great in bed.

In Spain, Mark told Vivien that his daughter wasn’t able to meet them and he expressed upset and frustration. Vivien told him not to worry and he suggested they make a trip to Gibraltar, which eagle eyed viewers might recall is the place Mark was researching in the last episode.

At home Helen was researching Mark’s background while in Spain Mark discovered that the pills had gone after convincing Vivien to go to Gibraltar with him. Back home Mary was reading the information from the pill box, which turned out to be for erectile dysfunction.

The next morning Helen and George discovered that Lily had gone from her room. George tried to call her but there was no response.

Jake called in to see Mary and asked if he could leave some of his stuff with her for a few weeks. She asked him about Leila and then brought up the subject of Vivien selling the house. Jake expressed his hope that he could change his mother’s mind and Mary suggested that maybe Mark had bought the car for Vivien on credit.

Helen and George called the police about Lily but they weren’t interested. They received a call from Natalie who told them Lily was with her but that only Helen was welcome to come over to her house.

Jake spoke to Leila to apologise for his behaviour and his debts. Leila said that she was still very angry with him for lying to her and hurting her. Jake accused Leila of having an affair and she refused to tell him who she’d been seeing. When he put his hands on her, she demanded her get off her and stormed off.

Natalie told Helen about the Instagram posts but admitted they didn’t know who the person was that had posted them because they were using a cryptic username. When Natalie told Helen to talk to George and find out both sides, Helen accused her of taking her husband’s side. Helen thought an affair made sense and laid into people that have affairs, unaware of what Natalie was up to with Tony.

A text message from Vivien brought her children together again in shock as she announced she and Mark had got married.

In Spain Mark was driving fast in the car while Vivien asked him to slow down. Back home Jake, Helen and Natalie traded theories about Mark’s influence over their mother. Jake suggested that Mark’s daughter didn’t exist and pressed his idea that Mark was after Vivien’s money.

Jake asked his son if Leila had been seeing her ‘new friend’ again and he told his father that she saw him the night before. He continued to quiz him to see what other information she could find out.

Natalie spoke to Mary and told her that Vivien and Mark had married. Mary was shocked but agreed to keep an eye on Vivien when they returned from Spain. Before Natalie left, Mary asked her what Mark’s first wife died of.

Helen wallowed with a bottle of wine at home in Lily’s room while she thought about George’s alleged affair while Mary curled up on her bed crying following Natalie’s departure. Jake broke down to Stella after their latest intimate encounter.

Vivien and Mark returned home and explained their impulsive decision to the family. They tried to tell them it was to cover themselves in case of a medical emergency while they were travelling so they were each other’s next of kin. Mark went to get steaks to cook over the fire and the minute he left, Vivien’s kids rounded on her.

Natalie asked why Vivien married the day before their father’s death and she admitted she’d forgotten. Vivien got irate asking her children why they couldn’t feel any happiness for her. They were interrupted by Mark screaming that the car was on fire.

Natalie told the police in the present day that she believed it was kids that set the car on fire but we could see that Mary was watching on from next door. The police stopped their interview with Natalie saying that the person who had been hurt was going into surgery.

Flesh and Blood continues Wednesday night at 9pm on ITV.

In this article:Flesh and Blood, ITV