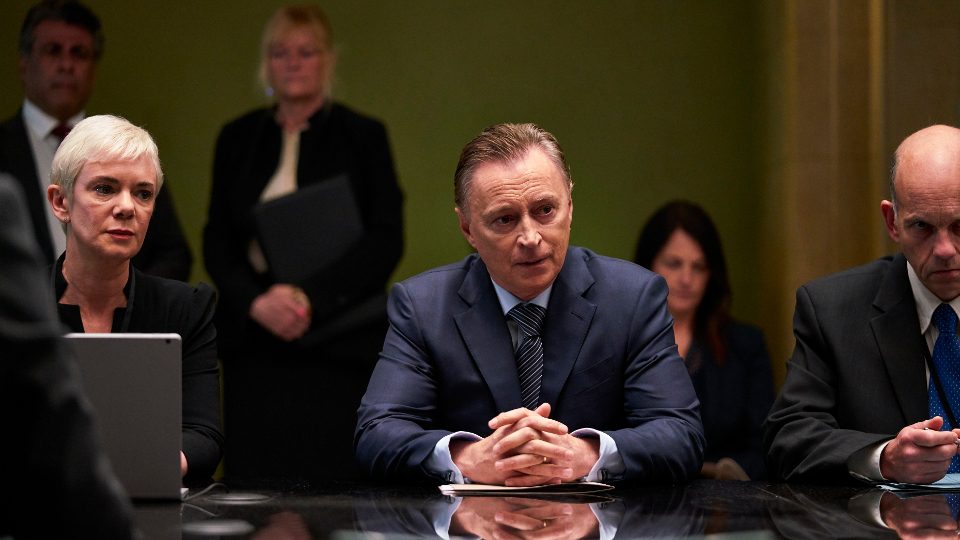 In the final episode of COBRA, Sutherland (Robert Carlyle) continued his fight to keep his promise to turn the lights back on.

The episode opened up at the site of the barricade where the military clashed with protesters at the end of the previous episode. It was the morning after the violence and members of the public had laid flowers at the barricade while holding a peaceful vigil. One of the trucks was now displaying a message calling for Sutherland to resign. The media were reporting on the events of the night before, with details of the four civilians who lost their lives. Harry Rowntree (Con O’Neill), the General Secretary of the Lorry Drivers Unions, took full advantage of the situation to attack the actions of government.

Archie (David Haig) held a press conference to announce that he had resigned his position. He placed full blame on the Prime Minister and hinted that he may even vote against the government in the upcoming confidence vote. Francine Bridge (Marsha Thomason) also quit and had a blazing row with Anna (Victoria Hamilton).

With Archie resigning, Sutherland chaired the next COBRA meeting. He was informed that the soldier who suffered phosphorus burns had died. MI5’s Eleanor James (Lisa Palfrey) gave an update that 6 arrests had been made of Neo-Nazis who had infiltrated People’s Justice and contributed most of the violence. Sutherland said he’d take full responsibility for the use of firearms. A bit of good news came in from Fraser (Richard Dormer) who announced that the super transformer was undamaged and nearing the substation. Sutherland told him to break all the records to get it installed as quick as possible.

Meanwhile, in the Red Zone at Northumberland hospital, Chief Constable Collier (Steve Cree) surveyed the situation and helped with the tidy up. He received a message that fuel supplies were low before the power went off and the hospital was plunged into darkness.

Back in London, Archie paid a visit to Sutherland and offered his support in the upcoming confidence vote. In return he suggested reinstating Dominic Knight (Sam Crane) in the policy unit. He later held a meeting with Knight and said he didn’t have the support to challenge Sutherland. They needed Sutherland to sack Anna. He also met with Peter Mott (Edward Bennett) to get details of how the Ellie (Marisa Abela) situation was handled. Archie planned to leak the details to the press right before the confidence vote.

After his earlier good news, Fraser was alerted to a situation involving the super transformer. The route they had take required crossing a bridge which was in danger of collapsing under the weight. The drivers refused to drive over the bridge and an alternative route would add an extra two days. Sutherland said to get another driver so Fraser just decided he’d do it himself. Initially the bridge held under the weight but started to crack and crumble as he approached the middle. Too late to turn back he went for it and made it safely across despite the damage to the bridge.

Eleanor updated Anna on the situation with Edin (Alexandre Willaume). The meeting at the flat was a drug deal which was being paid for by him performing an assassination. Anna didn’t want to believe it and Eleanor said she wanted to do a deal with Edin for all the info he had on Tony Lulin. She also told Anna to get clear of Sutherland because Archie would only support him if she quit. MI5 later monitored a conversation between Anna and Edin where she told him to stay and take the offer but he refused. He said he loved her and that he’d go back home and wait for her.

Ellie was monitoring social media to see what people were saying about her. She was upset at how things were going and argued with her mum. She later went to her room with a bottle of pills and alcohol. Sutherland decided to check on her and interrupted her which stopped her from taking her life.

Sutherland held a meeting with Dominic Knight and Archie and they were under the impression that he would reinstate Knight. It was all a game just so he could tell them to get lost and they both left furious.

During the next COBRA meeting, Fraser called in as the new super transformer was about to be tested for the first time. Anna asked Sutherland if he was sacking her and he said he wasn’t. The test went well and power to the Red Zone was restored. Everyone began celebrating but no one as much as Sutherland who had kept his promise.

Archie began plotting his next moves which were made more difficult by Sutherland’s success. He spoke with Eleanor but was warned off going after Anna.

Sutherland spoke to Anna about next steps and said he’d go for a General Election if needed. She said he needed to offer something new and different and suggested he announce a wealth tax to help those affected by the storm. He wasn’t convinced at first but realised that she was right.

At the last COBRA meeting, Sutherland thanked everyone for their efforts during the crisis. He said the confidence vote was irrelevant and that he intended to call a General Election. Fraser updated that there were still some instabilities in the Red Zone but all other zones were fully operational.

COBRA has been renewed for a second season.