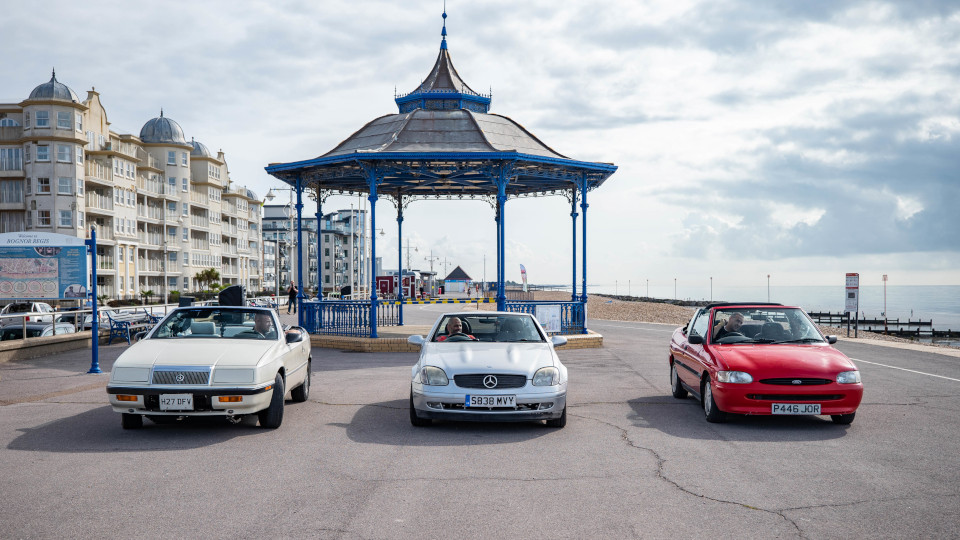 The wait is over and Top Gear is back with the popular line up of Freddie Flintoff, Paddy McGuiness and Chris Harris. The chemistry these guys have is still evident in abundance and the direction the show is taking makes a joy to watch.

In this episode, the main feature is a film around a summer holiday road trip where the boys have been challenged to buy a second-hand convertible car for no more than £6oo. They then meet up in Bognor Regis as the challenge begins in earnest. Flintoff decides to buy an unheard of Chrysler, Harris turns up in an old Mercedes SLK and true to form McGuiness has chosen yet another Fors Escort.

Their first challenge is to not get overtaken by The Stigg as they navigate typical holiday traffic around a race track. Stigg is driving a five-litre Mustang though so it doesn’t take too long. Next up is a time challenge around a motor cross track. Whilst this sounds reasonable normal, for Top Gear, there is a twist. The boys are being constantly sprayed with lube whilst they try to make their way around making things much more challenging with hilarious consequences.

The third convertible challenge is supposedly all about the car’s agility. Personally I think it was more about making the presenters look stupid and things are all the better for it. The challenge is to drive across a driving range trying to catch as many golfballs as possible inside the car.

For protection, Freddie opts for an ice hockey get up, Paddy wears a full suit of plate armour and Chris is stuck inside an inflatable T-Rex costume. Whilst they are driving there are twenty golfers firing golf balls at them. The result is many broken windows, uncountable dents and Chris Harris running around like a T-Rex trying not to get hit.

The final challenge is to make it across a causeway whilst the tide is coming in. The winner is the one who gets across last, essentially this is a test of nerve. Paddy ends up being the only one to make it across with the other two getting stuck partway across. This very quickly degenerates into a water/mud throwing fight between Harris and Flintoff.

Also during the show, we see Chris taking the all-new Ariel Atom 4 out for a spin on the test track. He is very impressed with the car and for only £40,000 I can see why given its performance. The Atom does 0-60mph in under 3 seconds but Chris thinks he’s found a way to get even better performance and uses an old Metro in the final film to prove his point.

The final film is quite simply crazy, idiotic and amazing. The Metro  I just mentioned will indeed be doing 0-60 faster than the Ariel Atom. The difference is it’s going to be reaching these speeds by falling off the top of a 500ft dam, attached to a bungee with Freddie Flintoff at the wheel.

This was another great episode from the new line up of presenters and was enjoyable from start to finish, it was rare when I didn’t have a smile on my face. I also have to salute Freddie who, to quote Harris “has a considerable pair of berries” on him.