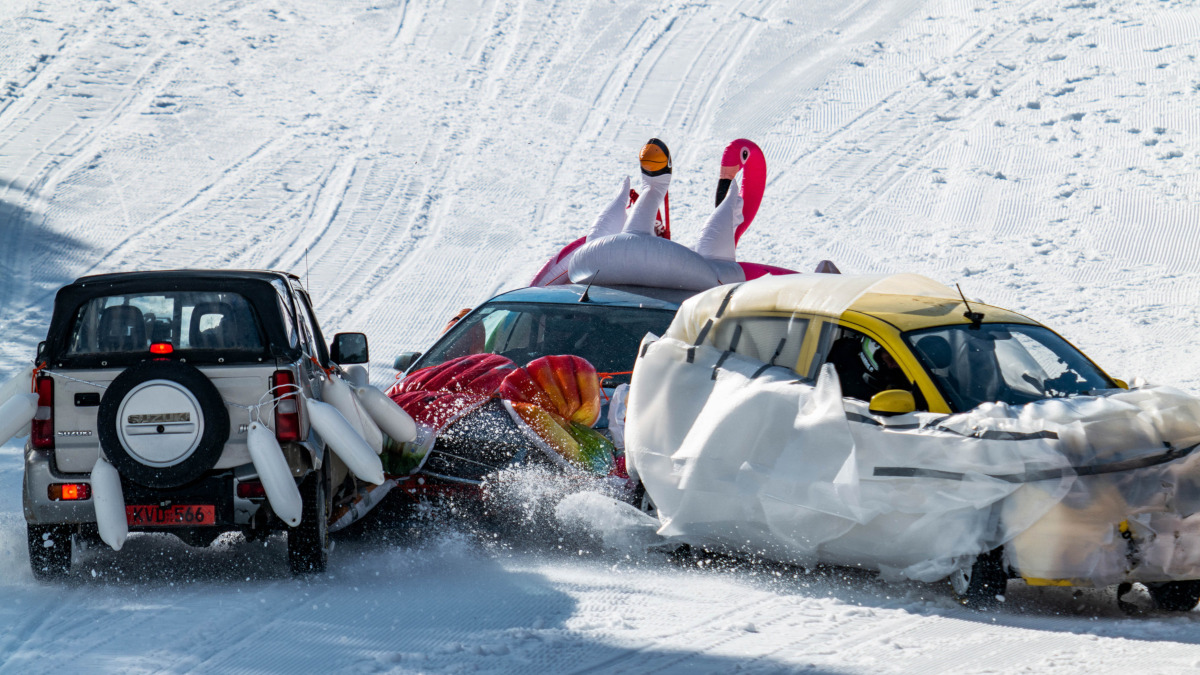 The guys at Top Gear are still managing to put out really entertaining shows despite the restrictions put in place since the Covid outbreak. In last nights episode, we are treated to two very different films being presented once again from the outdoor drive-in.

Film one is all about hire cars, specifically the hire cars you can get for fifteen euros a day. The film is set in Cyprus as this is supposedly where they cheapest hire cars in Europe exist. After some haggling at the hire car counter, the guys head to the car park to see what their small budget has afforded them.

Freddie has gone for a Suzuki Jimny, Chris a bright yellow Kia Picanto whilst Paddy has a convertible Ford Focus. All of the cars are somewhat worse for wear and after the usual ribbing of each other for their car choices the boys are given their first challenge.

They head to the only race track in Cyprus where they are tasked with putting in hot lap times. There is a slight twist here as there will be traffic going the opposite way around the track to simulate the local traffic you would experience in the real world. This results in some pretty scary laps but somehow all the guys, even Freddie, manage to make it round unscathed. Paddy wins and with his typical lack of humility, immediately rubs it in the faces of the others.

The next challenge requires them to drive to a local reservoir. Part of the route is offroad and whilst Freddie’s Jimny manages well the other cars don’t cope as easily. After the offroad segment, the roads are littered with car parts that have fallen off each of their vehicles.

At the reservoir, they are set a challenge to see how fast their cars can pull them whilst water skiing. This involves removing one of the wheels and attaching a drum of tow cable. At the other end of the cable is one of the presenters. The cars are fixed in place and the engine is used to real in the tow cable.

As you can imagine, the results are hilarious and there is considerably more falling and half drowning rather than actual water skiing. Chris is by far the best having done it before but none of the guys does especially well.

The final challenge has the guys gaining altitude as they head to a ski resort. It’s quite strange seeing snow given Cyrpus’ reputation as a summer holiday destination and you can tell that the presenters are also surprised. The challenge is to see how quickly the guys can complete a downhill slalom course in their cars.

To try and minimise the damage the boys each choose some homemade protection for their vehicles. Chris opts for wrapping his car in bubblewrap, Freddy goes for boating buoys and Paddy covers his car with inflatable lilos. This challenge results in carnage as, predictably, the boys decide to smash into each other and the homemade protection does absolutely nothing.

Next, the boys have to return their cars to the hire company. Rather sheepishly they pull into the car park to await the reaction of the hire car manager. I’m still not 100% sure if they used an actor to play this role as the guy looks seriously fuming with how wrecked his cars are. If he wasn’t an actor then he deserves an award for keeping his cool.

The second film shows us two choices for family vehicles if money was no object. Chris has picked an Audi RS6 estate with Paddy opting for a Lamborghini Urus SUV. The cars are tested by doing a mock school run on the Top Gear track followed by a drag race where they are towing caravans. Finally, the Stig does a lap in each vehicle and the times are split by a mere two-tenths of a second.