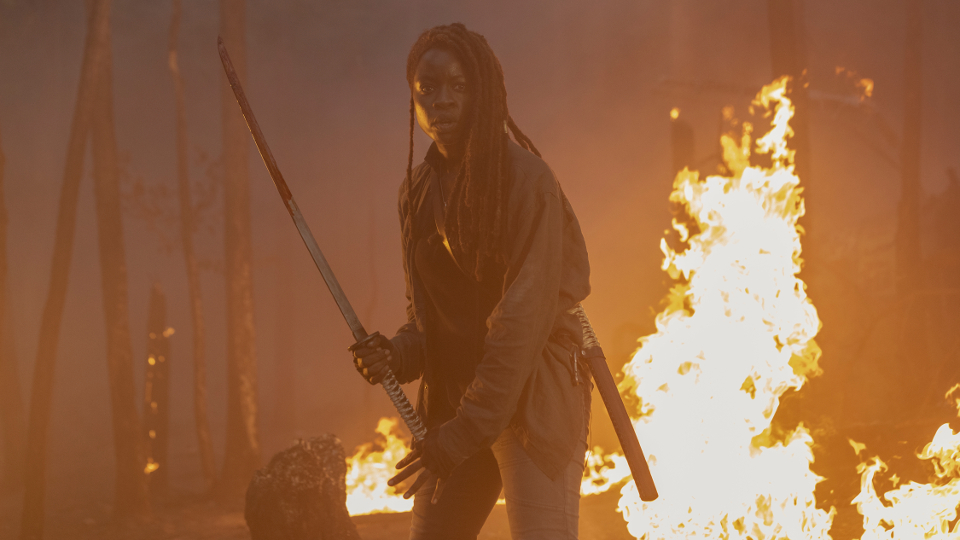 In the season 10 premiere of The Walking Dead, we caught up with the survivors as a few months had passed and the season changed from winter to spring.

With the Whisperers having seemingly disappeared, the survivors had spent their time training for the inevitable day when they returned. To show off the results of their hard work, the episode opened up with a full day of training taking place at Oceanside. Aaron (Ross Marquand) was leading his troops in what looked like full-on Roman military drills complete with metal shields, archers and spears. Ezekiel (Khary Payton) and Jerry (Cooper Andrews) had a group of walkers trapped in a large rusty boat and were letting them out in waves so the group could practice their combat. It was an impressive display but it remains to be seen just how well their new tactics will work against Alpha (Samantha Morton) and her army.

While the adults are practicing, the kids were playing and discovered a Whisperer mask wash up in the sea. The group wondered if the Whisperers had returned and went to scout around, while being careful not to stray into their territory. Aaron lost his patience and nearly found himself overwhelmed by walkers. Fortunately Michonne (Danai Gurira) stepped in to save him. One of the other groups uncovered more possible Whisperer activity when they found a decimated campsite.

At Alexandria, security was stepped up we got to see that Negan (Jeffrey Dean Morgan) is now allowed out of his cell to work under supervision. As ever he’s aware of what’s going on around him and noticed that people still weren’t too keen on Lydia (Cassady McClincy).

At Oceanside, a fishing boat returned and it was revealed that Carol (Melissa McBride) had been mostly living on it since the events of last season. Ezekiel was pleased to see her but she pretty much ignored him and went off with Daryl (Norman Reedus) on his bike. They spent some time together and Carol proposed the pair of them running away together. Daryl however thought they should stay.

Panic soon set in when an unexplained fireball flew across the sky into the woods in Whisperer territory. It turned out to be an old USSR satellite that had come down to earth. The impact caused a fire and the survivors made the decision to cross Alpha’s border to try and prevent the fire from spreading. They had to work through the night to deal with the fire which also attracted large numbers of walkers. Each wave of walkers had everyone also worrying that some of them could be Whisperers.

At the end of the episode, Carol and Daryl headed off again to what looked like the location that Alpha revealed her mega walker herd. Carol wanted to leave again but Daryl wanted her to stay. After Daryl walked off, Carol spotted something below. It was Alpha, the Whisperers have returned. She looked up and saw Carol in her territory which presumably is going to lead to war.

Can’t wait for the next episode? Read our preview of The Walking Dead – 10×02 We Are the End of the World.