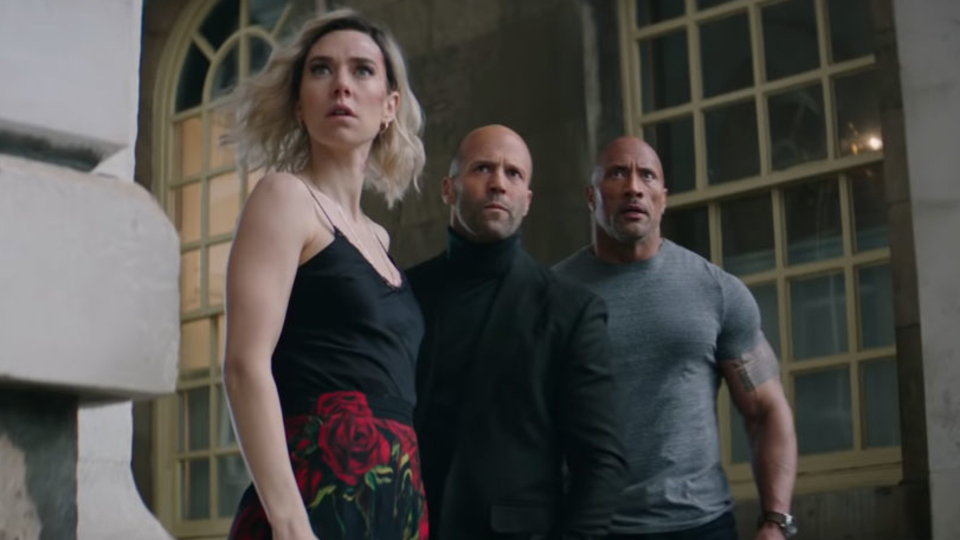 The term popcorn cinema was made for something like Hobbs & Shaw, the latest offering from the Fast and Furious universe. And yes, this has someone now spawned 9 films, even if this is classed as more of an off-shoot than a direct sequel. With Fast & Furious 9 and 10 on the way, this outing lets us revel in the mayhem that two of its most popular (and newer) characters can conjure.

Luke Hobbs (Dwayne Johnson), who we were first introduced to way back in 2011 in Fast & Furious 5 gets his own movie alongside former villain turned reluctant ally Deckard Shaw (Jason Statham). A powerful chemical weapon is in open play, which has attracted the attention of Brixton (Idris Elba), an enhanced human who is looking to acquire it for a shadowy organisation. Before he can, Deckard’s sister Hattie Shaw (Vanessa Kirby – Mission: Impossible – Fallout) manages to take it, but that means she has become the number one target for both the bad guys and the authorities. Enter Hobbs and Shaw, who reluctantly team-up to save Hattie and bring Brixton down before he unleashes hell.

If you’ve seen the trailer, you know that this movie looks more like one of those fake films teased in Tropic Thunder than a plausible expose into the world of military espionage. The absurdity of the spectacle is fully embraced by a knowing cast though, who all go full-throttle to deliver a pure piece of escapist fun. The script is pretty poor and story is very familiar (see Mission: Impossible 2 for basically the same set-up), so what it doubles-down on is big action. The set-pieces utilise some brilliant locations around the world (including some great location shoots in London). It’s a shame the trailer gave so much away because there was little that surprised me in terms of action.

The chemistry between Johnson and Statham is enough to carry the film, with the two power-houses butting heads at every given opportunity. Their constant bickering is hilarious and I’m glad Statham is given more to do in the movie than just bounce off Johnson, whom we all know can do this type of gig in his sleep. The action stars give their all and deliver some really funny sequences, and with the strength of these central characters, it’s easy to see a sequel or two popping up down the line.

The supporting cast are all good too. Idris Elba clearly has fun playing ‘Black Superman’ as he dubs himself, and more than holds his own in the movie. The final fight between Johnson, Statham and Elba is really well done, including the way its shot in a rainstorm using high-definition slo-mo, capturing every bone-crunching punch and kick in a very cool way. Helen Mirren is always entertaining as Shaw’s mother and there are a few surprise cameos from some well known faces. But Vanessa Kirby easily steals the film as Hattie, and she elevates the material with a great performance full of action and comedy.

It won’t leave much of a mark (unless you see this in 4DX, and if you do my condolences), but Fast and Furious: Hobbs & Shaw does exactly what it sets out to do. It’s a shame that more time wasn’t afforded on the script, because everything else was in-place. But it matters little if you’re looking for a great distraction. In these troubled times we live in, Hobbs & Shaw could be just the tonic to escape the pressures of everyday life and just enjoy a little bit of mindless fun.