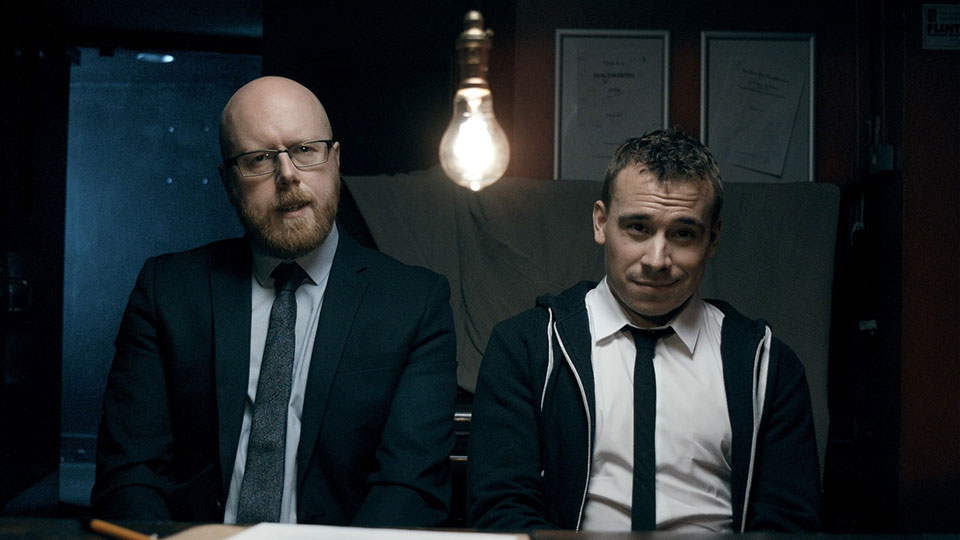 Criminal Audition is part of the First Blood strand at this year’s Arrow Video FrightFest.

The film, which started off life as a play in 2009, has had a long journey to the big screen and it’s almost time for it to be unleashed. Luke Kaile stars in the film and co-wrote the screenplay with director Samuel Gridley, based on his original stage show.

I spoke to Luke about the long journey from stage to screen, discussed the hurdles and lessons along the way, and the difficulty of juggling multiple roles during the making of the film…

Hi Luke. How are you today and where does this Q&A find you?

We’ve just finished doing a private screening with a Q&A through the Visual Effects Society and I’m now sat at home energised from it and wanting to get more films made!

Your film Criminal Audition is receiving its World Premiere at Arrow Video FrightFest. What’s it all about?

In Criminal Audition we have an underworld organisation that seeks out “down on their luck” individuals who are willing to frame themselves for other people’s crimes in exchange for wealth and a new life when they serve the time.

The film takes place over the course of one night in a soon-to-be demolished theatre, where we have our auditionees being tested by the organisation. How will they stand up to a police interrogation? Are they the right fit for the crime?

However, this audition is going to go slightly different than the previous ones, as the client has turned up and she’s decided to…shake things up a tad.

Criminal Audition started out life as a play back in 2009. What was behind the decision to expand it into a film?

Back in 2009 I had just left University and was having the standard panic of being released into the big, wide world without any idea of how I could make those steps into film. One of the ways I went about it was writing for competitions as forced me to produce work, to generate ideas – even if they were terrible! Criminal Audition was one that won a competition to be performed as a short play. We had it performed and I expanded it into a feature length play when I saw it had potential to grow. I think after each performance I would chat with audience members after the show who would say how interesting the idea would be in film. I think that’s when I knew this would be the right script to put the effort into. Until then I had a reluctance to dedicate any time to feature film development, because you don’t want to go in with the wrong project as it’s such a huge undertaking!

What really fascinated me was the play version was a farcical comedy, it was full of goofy humour and elaborate setups. What was so fun was to take the idea and give it a grounding in a real world, make the concept feel like it could be happening in abandoned theatres and warehouses around the city!

What challenges did you face adapting the show for the big screen?

We could be here a while! To try to be more succinct, we had to conquer the financial hindrances, the logistical minefields and demands on cast and crew. But without going into too much depth on those aspects, I think the overarching thing was maintaining the push to completion. I think it’s very easy for independent films to live in a perpetual state in any part of the process. Some films don’t even get past pre-production, some films lose their way during the shoot and some linger in post-production, unable to make that last leap. I think having such a small crew, it was having that pressure that if we didn’t action something, or chase something up every day, then we would never reach the finish line. It’s quite a challenge to maintain that, especially when the odds are heavily stacked to stop you, whether that’s a finance, logistics or creative issue. And as we’re all learning on a first feature, you have to know you’ll fail and find a way to pick yourself up again.

As well as having co-written the screenplay, you star in the film and produce it too. How difficult was it to juggle all of those different roles?

I think if we tried to make this all those years ago, we would’ve ended up with a pretty bad product. Despite being frustrated about not being able to shoot it in 2013, 2014 etc, it was a necessity. Sam and I gained so much education through having to accept that we could only produce short films or sketches for now. We also learned a lot through the failure we had in trying to get Criminal Audition made sooner.

With that education in mind, we made sure there was clear delineations in roles. It happened a few times on set where an actor would approach me with a question purely because they saw me as the default, they knew it was my project from years back – but I would then signpost them to Sam, as he’s the director. Any idea I had, whether it be for my character or a producer suggestion, I ran through him – it was his set, his vision. I think I knew of other productions that had not defined those roles and enforced them as we did, and I think it just convolutes the message you’re giving out.

I think in order to juggle everything, the first thing I had to do was accept this wasn’t my film, it was our film. You must relinquish that control, people are hired in roles because they’re great at that role, and you can’t spend your time micromanaging everything, it will 100% end up being a detriment to the film you’re trying to create. We hired two other fantastic producers in Nathaniel Francis and Luke Mordue, and we split our roles up and made sure each other was trusted with those elements of the production.

The writing was the same. It’s taking the ego out of the equation and remembering that when Sam gave notes on a scene, he was trying to dig into how we can make it better, not attack my writing! And we really enjoyed that process together, I think we’re good at appreciating and listening to one another, and before you know it, your thoughts are aligned.

Criminal Audition really has been a labour of love for you. How are you feeling now it’s about to be released into the world?

A relief! But I don’t feel it’s complete or ever will be. That’s the thing with this project is with every hurdle you say, “if we can just get through this then we’re about there!”, but there’s always something else. We’re quite a small team so moving into the sales and marketing side of things is yet another challenge we must navigate and learn.

As far as people’s reactions though it’s been great. I think from industry feedback and advanced reviews we’ve had so far, we’re surprising people (in a good way). Creating a film, especially with a group of other first-time feature film makers you have that feeling of imposter syndrome always in the back of your mind. This may sound strange, but seeing people react to it as a real film is just so pleasing, because even when we exported the final version of the film you still wonder if you’ll be taken seriously. We’ve had a few private screenings over the last few months and hearing people debate character actions and plot points is just so thrilling for me, people can love it or hate it but knowing that they have engaged with it makes it feel worth it.

You’ve done a variety of acting work before but this is your first feature film lead role. What was the biggest lesson you learned as an actor while making Criminal Audition?

It kind of aligns with the idea of imposter syndrome again. In any creative platform where you are working quite free and with no one giving you a monthly appraisal is you get that doubt. You must push that doubt away and make definitive choices. Working as a producer on Criminal Audition has given me that greater understanding of the “machine” behind the camera. Having that knowledge meant I could track what was expected from my character in that moment, or for that shot angle and so forth.

Have you started thinking about your next project yet, and if so what is it?

Yes. Creating Criminal Audition was such a film school for ourselves and further to that we found that we were great friends. Not just Samuel and I, but also the producing team and crew around us. Samuel and I have written treatments and have a slate of roughly four films that we want to make which feel like natural progressions on Criminal Audition. We very much see this film as our calling card.

What’s the one horror film you wish you’d written and starred in, and why?

It’s an obvious one, but it’s obvious for a reason – it’s superb! I’m going to go with the first film that genuinely scared me (probably watched it far too young as well) – Alien.

The claustrophobic setting. The creation of the alien and how it is used. The dinner scene. The economy of the script. That genuine terror on our character’s faces.

Why should people check out Criminal Audition at Arrow Video FrightFest?

To be surprised. To see something a little bit leftfield. Being truly independent has allowed Samuel and I to have a lot of fun and break from expected moulds in genre, characters, or even the film’s score (wonderfully composed by Asa Bennett and Al Anderson).

It’ll be darkly funny, it’ll be strange, it’ll be violent and then suddenly it’ll be poignant. Just when you think you know the world we’ve created; we flip it.