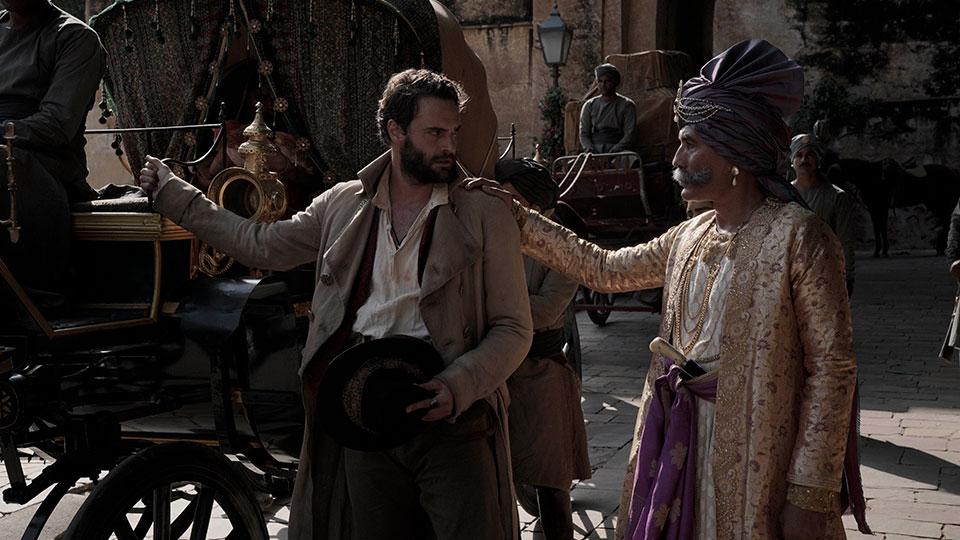 The truth finally came out about Beecham’s (Tom Bateman) mysterious past on tonight’s episode of Beecham House.

The episode picked up where the previous episode left off with Chandrika (Pallavi Sharda) entering Beecham’s room. He told her she shouldn’t have come to his room but she pushed about their connection. They both admitted to feeling overwhelmed around each other.

The next morning Violet (Bessie Carter) confronted Henrietta (Lesley Nicol) about bringing her to Delhi after witnessing Chandrika sneaking into Beecham’s room. Confused, Henrietta asked Violet to explain what was going on and Violet revealed that Chandrika went into Beecham’s room and assumed they must be having an affair. Henrietta tried to dismiss Violet’s concerns and told her that she would help her become the last woman standing in Beecham’s life.

The Prince Akbar (Rudraksh Singh) visited his mother and warned her that it was only a matter of time before the British made their way to Delhi. He told his mother that Castillon (Grégory Fitoussi) couldn’t protect them and she promised to finance his efforts.

Maya (Trupti Khamkar) watched on as Chanchal (Shriya Pilgaonkar) and Daniel (Leo Suter) openly flaunted their relationship and she promised to say something to Chanchal about the situation.

Beecham, Daniel and Samuel (Marc Warren) paid a visit to the Emperor (Roshan Seth) with Henrietta, Violet and Margaret (Dakota Blue Richards) watching on. Violet stirred the pot between Margaret and Beecham by telling Margaret about Chandrika. Margaret refused to believe what she heard but when Violet carried on with her story, it became obvious that the revelation was deeply upsetting to Margaret. Beecham saw Margaret leaving on the balcony as he was granted his free trade licence from the Emperor.

Back at the house Beecham celebrated with his family and friends but expressed his concern about seeing Margaret leaving during the ceremony. Violet used the opportunity to try and get into Beecham’s good graces but he excused himself to see Margaret. Before he could leave Baadal (Viveik Kalra) told him that someone was at the house to see him.

Beecham went to investigate and was met by the Prince who was in disguise. He was given a royal stone and asked to sell it discreetly. Beecham was reluctant to go behind the Emperor’s back but the Prince insisted he went ahead with the sale.

Samuel spent time with Violet asking about her father but was interrupted by Beecham who asked to have a word. Beecham confided in Samuel about the stone and told him that the royal family needed the money to defend their kingdom. Samuel encouraged Beecham to press on and stopped the conversation when Daniel arrived in the room. Beecham let Daniel in on his dilemma and Daniel tried to talk some sense into his brother. Samuel and Daniel locked into an argument and when Daniel tried to question Samuel’s motives, things got very heated and Samuel offered to set up meetings with potential buyers.

Daniel probed Beecham about his relationship with Samuel and he told his brother that he didn’t trust Samuel. Beecham dismissed his concerns.

Maya finally confronted Chanchal and expressed her disapproval of her relationship with Daniel. She told her that by sleeping with Daniel, she was upsetting the other house staff and urged her to end their relationship.

Beecham visited Margaret to see how she was feeling and was met with unwanted questions about Chandrika. He was hurt by Margaret’s questions and even more so when she told him about her fiancé who couldn’t control his urges. Margaret brought Beecham’s feelings towards her into questions and Beecham tried to assure her that it was a misunderstanding. He asked her to come with him so he could explain everything to her.

Continuing his duplicity, Samuel told Castillon that he could help him destroy the Emperor’s faith in Beecham and get him out of Delhi. He lied that Beecham had stolen the royal stone and suggested that there was a traitor in the Royal Family.

Daniel told Chanchal that he was returning to the company and she tried to convince him to stay with her instead. When Chanchal said that she was expecting to be his wife, Daniel was taken by surprise and got angry about giving herself to him. Ram Lal (Amer Chadha-Patel) heard the exchange. Daniel apologised but Chanchal was too angry, telling him she felt ashamed.

Upset Chanchal burst into tears when the house staff were mean to her. Baadal asked if she was OK and offered to help. He watched helplessly as she walked away in tears cradling August.

Daniel told Henrietta that he was returning to the company but before he went, he confronted her about using opium. He told her he’d seen her the night before and when she lied to him, he searched her room. She begged him to stop and came clean saying that she started taking it when her family left her. When he found the opium, he pieced together that Violet had been helping her. Daniel scolded Henrietta and told her she had to stop taking it. In retaliation Henrietta brought up Chanchal and accused him of breaking her heart and giving her no respect.

Realising his mother was speaking the truth, Daniel stood quietly while she gave him a dressing down and told him to stay out of her business.

Beecham returned to the house with Margaret and gathered everyone around. He told the assembled group that he was going to come clean about part of his life he was keeping secret to protect his son. Before revealing anything, he asked for everyone to keep what he was about to tell them a secret.

He started with why he left the company, explaining that he couldn’t bear their actions any longer. After leaving, he went to India where he found peace and learned some new skills. His story linked back to what viewers saw in the opening moments of episode 1 when he helped a carriage under attack on a dirt road. After he saved their lives, he was shot and taken back to their home to be nursed back to health.

It was there he was looked after by the Maharaja (Denzil Smith) and his two daughters Chandrika and Kamlavati (Saiyami Kher). The Maharaja told him that if he were to die, his estate would be seized and that’s why he had been targeted. During his stay, Beecham fell in love with Kamlavati who became his wife and the mother of his child.

The Maharaja warned Beecham that he and his daughter needed to go into hiding with their son before his brother found out about them and came for them. That night Beecham left to start a new life with his wife and child. One night Kamlavati was shot and killed but August survived. A distraught Beecham found his wife’s body and called for help.

As he finished his story, Beecham admitted that he had lied that August was also killed to keep his son safe. Beecham was urged by the Maharaja to take August but never to reveal his true identity to anyone. That is how he came to Beecham House so his son could grow up without any threats.

Beecham asked Margaret if he had answered her questions. The two left the rest of the group to talk. Beecham told her he should have told her the truth a lot earlier and Margaret told him that she understood. With Henrietta and Violet watching them, Margaret made an exit as Chandrika confirmed that August was going to be a Maharaja.