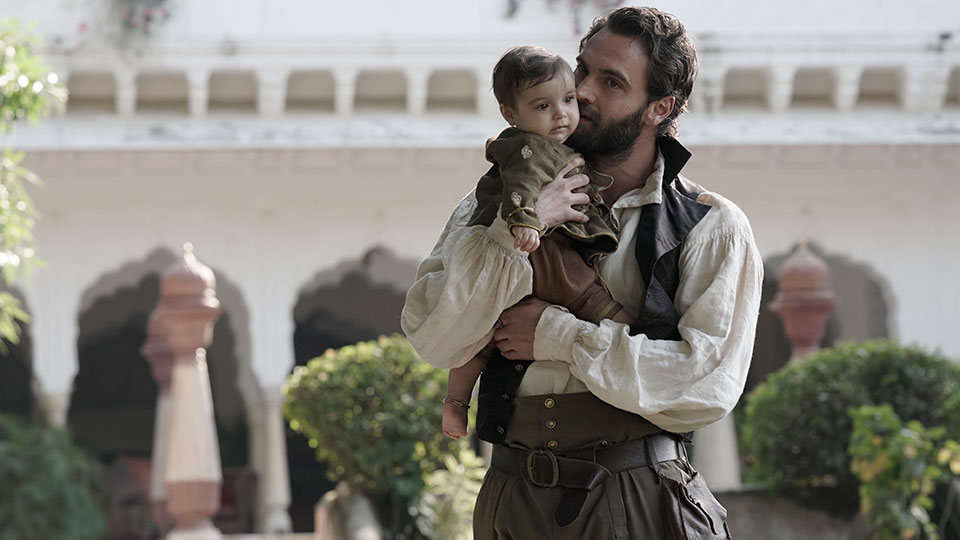 The first series of Beecham House came to a close tonight but did Beecham (Tom Bateman) get out of prison?

With Beecham still languishing in jail, Prince Akbar (Rudraksh Singh) pleaded with his mother to let him come clean to the Emperor (Roshan Seth). The Empress refused telling him he needed to think about himself.

Margaret (Dakota Blue Richards) visited the Empress in an attempt to persuade her to let Beecham go. She told the Empress that she knew he wasn’t guilty and admitted that she was in love with him. The Empress questioned why Margaret had come to her and in response Margaret explained that she knew the empress had influence and appealed to her motherly side for help.

Castillon (Grégory Fitoussi) checked on Beecham who asked him how he knew that he had the diamond. After refusing to answer, Castillon told Beecham he had a visitor and Samuel (Marc Warren) entered the jail.

Beecham tried to keep his cool and act normal while Samuel informed Beecham that he was going to make a deal with Castillon to let him free. Samuel revealed that if he promised to take Beecham away from India with the promise that he’ll never return, he would be released.

Beecham replied saying there was nothing for him in England and Samuel urged Beecham to testify against the company in exchange for his safe transport home. It was also revealed that by Beecham testifying, he would clear Samuel’s name too. Beecham said that if Castillon agreed to the deal, he would give his answer.

Back at the house Henrietta (Lesley Nicol) walked in on the house staff praying for Beecham. As she joined them, she struggled to hide her emotion.

Ram Lal (Amer Chadha-Patel) told Daniel (Leo Suter) that they needed to bring Chanchal (Shriya Pilgaonkar) back. Baadal (Viveik Kalra) refused to tell everyone where Chanchal was and Ram Lal suggested they follow him. They did and came face-to-face with Chanchal.

The Maharaja (Denzil Smith) and Chandrika (Pallavi Sharda) arrived at the home of the Emperor to try and help Beecham. Margaret pleaded with Chandrika to tell the Emperor the truth about how Beecham acquired the diamond and Prince Akbar interrupted them, worried that he was about to be rumbled.

The Maharaja appealed to the Emperor and pointed out that Beecham had formed a relationship with the Prince. The Emperor ushered the help away and the Maharaja revealed the truth about what the Prince was trying to achieve by giving the diamond to Beecham.

The Emperor seemed to listen to the Maharaja and Prince Akbar asked his father for forgiveness, and it looked like the Emperor was in a forgiving mood.

Samuel visited Beecham again to tell him that Castillon agreed to his release. Beecham told Samuel that he knew he had betrayed him. Samuel attempted to lie his way out of it but Beecham made it clear he didn’t believe him. Beecham outlined how he knew Samuel had targeted his mother and Samuel admitted he’d been keeping an eye on her for two years.

At that moment Castillon arrived informing the men that Prince Akbar had revealed Beecham’s innocence. Castillon apologised to Beecham and Samuel, losing his temper, stabbed Castillon twice. He then turned Castillon’s gun onto Beecham to force him to return to England with him.

When Samuel told him that if he didn’t testify he wouldn’t see his family again, Samuel saw an opportunity to frame Beecham for the attempted murder of Castillon. The guards rushed in and restrained Beecham while Samuel made a quick get away.

Henrietta spent time with Chanchal, who returned to the house. Chanchal revealed her plan to leave the house and return to her family. The house staff pointed out that Chanchal would suffer shame if she left and unexpectedly, Henrietta asked her to stay at the house. Baadal asked Chanchal to think of him as her husband but the offer took her by surprise.

Beecham was called to see Prince Akbar and was told that Castillon would survive. The Emperor thanked Beecham for his loyalty telling him that the Prince would now be his eyes. The Prince asked Beecham to join the family in their fight and Beecham was given the diamond back to sell, which he agreed to do.

Beecham returned to his home and was greeted enthusiastically by the house staff and his family. He asked for Margaret and Chadrika revealed that Margaret played a key role in securing his freedom. Beecham then held his son as everyone looked on.

As night fell, Beecham visited Margaret who was delighted to see him. The two kissed passionately.

The next morning Henrietta apologised to Violet (Bessie Carter) for Samuel’s duplicity. Violet cried as she came to the realisation that Samuel was after her family fortune. Daniel promised to find Violet the right husband so she wouldn’t live out her days as a spinster.

The Maharaja arrived at Beecham House and was greeted by Beecham and Chandrika. He was taken to see his grandson and meet Beecham’s family. After the Maharaja held August, Beecham introduced him to Margaret who noticed that they had a connection.

Asking Beecham to go for a walk, the Maharaja told him how grateful he was to him for looking after August. He told Beecham that he believed he should marry Chandrika to keep the family safe but Beecham refused to do so. Listening to Beecham’s pleas, the Maharaja gave him his blessing.

That night the Maharaja and Chandrika left Beecham House while Castillon and the Empress continued their torrid affair.

Daniel and Chanchal finally found time to talk and things quickly got heated. Chanchal told Daniel that if he didn’t marry her, she was willing to raise their child on her own. Baadal looked on as the drama unfolded.

Beecham sold the diamond and spent time with August. Henrietta tried to forge a friendship with Chanchal by helping her around the house.

Daniel arrived with Beecham, accompanied with Margaret, to ask if he could be his brother’s partner rather than return to the Company. Beecham agreed and told him he could deputise for him while he took Margaret away the next day.

Beecham took Margaret to see the Taj Mahal, leaving her speechless. He then asked her to be his wife and she said yes. As they got back in their carriage, it was revealed that Samuel had been watching them and he looked less than pleased to see his old pal happy.

As they returned home, Beecham found his house staff slaughtered in the grounds of the house. Rushing to find out what happened, Beecham was told by Henrietta that August had been taken but no one knew by whom.

Can anyone says series 2?