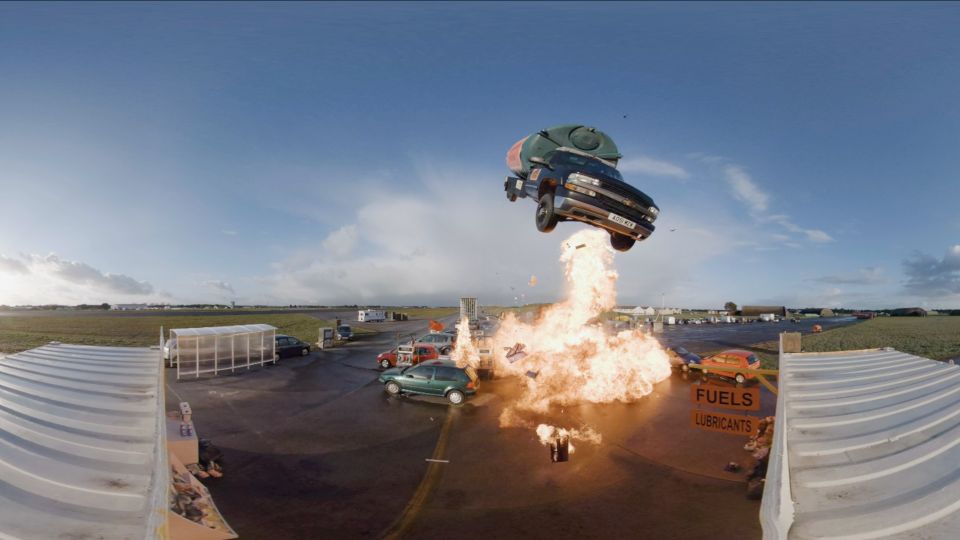 I’ve really been enjoying this season of Top Gear so far. I’ve enjoyed the banter of the new presenters and the ludicrous things they get up to. To further enhance the Top Gear experience the brand is releasing three original films that allow the viewer to take the driving seat in some spectacular stunts.

The films are extra special as they are not only filmed in the first person, they are also filmed in 360 degrees giving the viewer a much more immersive experience. The three films will include a jump over a petrol station, (the amusingly names Auf Wiedersehen Petroleum), a music festival and a supermarket carpark.

In the first film, the viewer will get to jump a petrol tanker over a petrol station. There’s a small problem though. The Stig has managed to spill petrol all over the floor and the results of the jump are somewhat explosive.

Film two involves jumping over a mini-music festival in an old, underpowered campervan. Less horse-power, more flower-power. Finally, the third film will see the Kia Ceed jumping over a supermarket carpark in a bid to claim the last parking space.

The videos are best watched on a mobile device with your headphones in. To fully immerse yourself it’s recommended to also use your mobile with Daydream View or Google Cardboard.

Duncan Gray, Commercial Director, Top Gear said: “We wanted to create entertaining content for our YouTube channel that took fans behind the scenes of a Top Gear stunt.  And by producing this content in 360 we were able to ‘virtually’ put viewers right there in the driving seat of three enormously inappropriate stunt vehicles, something we’ve never done before.  The results, as you will see, are smashing!”