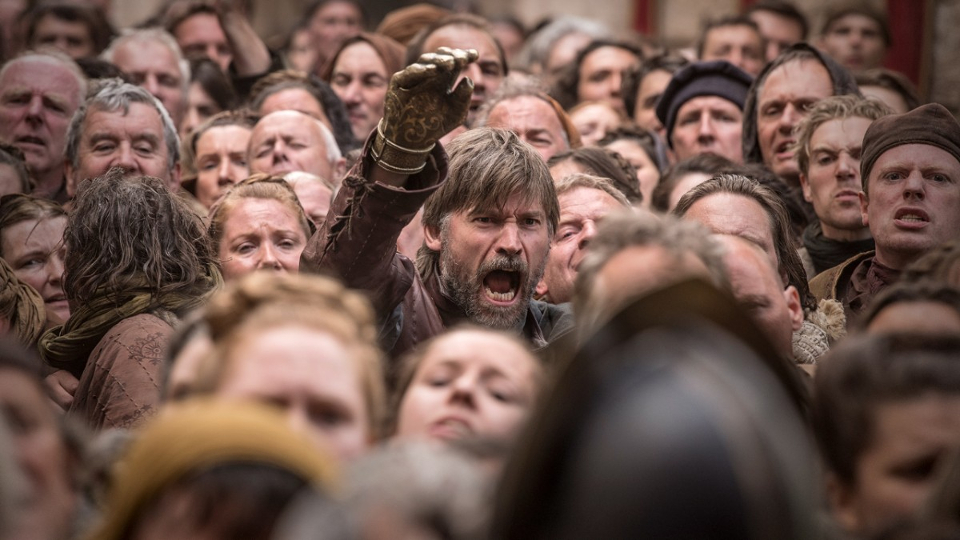 The fifth episode of Game of Thrones season 8, gave us the Last War as the remaining forces clashed in an epic battle at King’s Landing.

If you haven’t seen Game of Thrones season 8 episode 5 yet and don’t like to read spoilers then please stop reading now. If you are up-to-date and want to relive the action then keep on reading.

The episode began with Varys (Conleth Hill), alone in his chambers. He was writing letters in an attempt to spread the word about Jon/Aegon (Kit Harington) being the true heir to the Iron Throne. He spoke to one of his child spies who told him that Dany was refusing to eat. Jon arrived on the beaches of Dragonstone and Varys confronted him to try and convince him to claim the Iron Throne but Jon refused.

Tyrion (Peter Dinklage) realised what Varys was doing and decided to tell Daenerys that he had betrayed her. Dany pointed out that Tyrion had betrayed her by telling Varys and that everything led back to Jon telling Sansa (Sophie Turner). Dany said Sansa had used Tyrion, knowing that telling him about Jon would ensure the news spread. Tyrion hoped Dany would understand that they were all trying for a better world. Dany made an example out of Varys by having him burned alive by Drogon to show what happens to those who betray her. Before he died, Tyrion confessed to him that he had told Dany.

Dany gave Grey Worm (Jacob Anderson) the collar that Missandei (Nathalie Emmanuel) had worn. It was the only possession that she had kept to remember her past. Grey Worm threw it into the fire. Dany confronted Jon about telling people who he really was. He stressed again that he didn’t want the Iron Throne and that she was his queen. They kissed but he pulled away from her again. Dany said that she didn’t have love in Westeros, only fear.

At a discussion about the impending attack on King’s Landing, Tyrion tried to convince Dany to spare the city and its people if it surrendered. He said that they would ring the Bells to indicate a surrender. Dany sent Grey Worm and the Unsullied to join the rest of the armies. She said they would know when it was time to attack.

Jaime Lannister (Nikolaj Coster-Waldau) was captured and kept prisoner by Dany’s soldiers. Tyrion went to see his brother and freed him on the condition he tried to ring the city bells and escape with Cersei through the tunnels. Tyrion arranged a boat for them to escape with the help of Davos (Liam Cunningham). Jaime agreed and the pair said an emotional goodbye.

At King’s Landing, Cersei let the people through the gates to use as human shields. The Hound (Rory McCann) and Arya (Maisie Williams) made it inside but Jaime wasn’t quick enough and looked for a different way to get to his sister. Meanwhile, Cersei watched the happenings below from the safety of her tower.

Harry Strickland (Marc Rissman) and the Golden Company marched outside and formed up along the city walls. They found the Unsullied, the Northern armies and Dothraki ready for battle. Tyrion reminded Jon to call off the assault should the city bells ring.

Dany arrived on Drogon and approached from on high with the sun behind her. It allowed her to surprise Euron Greyjoy (Pilou Asbaek) and his Iron Fleet. She destroyed their ships and Euron only just managed to jump to safety. Dany then got to work on the scorpions lining the city walls and took advantage of how slow they were to aim by alternating between low and high approaches. She cleared a path to the gates and Drogon’s breath destroyed them and made a hole in teh wall. Drogon’s breath also set most of Golden Company on fire. Strickland tried to flee but was cut down by Grey Worm as they began their assault.

The armies made their way into the city and took out any soldiers they came across. Eventually the armies faced off with the Lannister soliders but dropped their swords and surrendered. Dany landed with Drogon and there was a tense wait but soon the bells began to ring to signal surrender.

Jon ordered his men to stand down but Dany was still raging and took to the air again. She headed for the Red Keep but decided to burn everything along the way – including innocent men, women and children. Grey Worm began to attack the unarmed Lannister soldiers and then all hell broke loose. The armies went crazy, murdering everyone they could find.

Meanwhile, Euron came across Jaime and taunted him into fighting by telling him he’d been sleeping with his sister. It was a brutal fight that saw Jaime stabbed several times. The Kingslayer refused to give up and he put his sword through Euron who died shouting that he’d killed Jaime Lannister.

Inside the Red Keep, Arya and the Hound made it to the Map Room. He said she didn’t need to kill Cersei as she would end up dead no matter what. He also said that if Arya went with him she would also die. As he left, she thanked him by his name, Sandor.

Drogon began his assault on the Red Keep and the towers began to fall. Pockets of Wildfire around the city began to erupt in green clouds. Cersei became worried and Qyburn (Anton Lesser) suggested that they take refuge in Maegor’s Holdfast – the strongest part of the Red Keep. After realising she wasn’t going to win she agreed and they made their way down the tower. Near the bottom they encountered the Hound who had come for his brother.

Cersei’s guards rushed him but he killed them with ease. Cersei demanded that the Mountain stay by her side but he ignored her. Qyburn tried to stop him as well but the Mountain smashed his head into nearby rubble which killed him. As Cersei continued to flee we finally got Cleganebowl as the two brothers fought to the death. The Hound did plenty of damage but his undead brother was seemingly unkillable. Even a dagger through his face couldn’t stop him and he almost gouged both the Hound’s eyes out using a similar move to what he did to Oberyn Martel. With the Keep collapsing, the Hound charged his brother and they both fell out the castle to their deaths in the fires below.

Cersei and Jaime reunited in the Map Room but found their escape blocked by collapsed debris. Cersei was in tears and said she wanted their baby to live and that she didn’t want to die. The castle came down on top of them, presumably crushing them to death.

Jon couldn’t stop the fighting and ordered his men to fall back outside of the city walls. With the help of Davos they tried to get some of the civilians to safety as well. Meanwhile, Arya almost got trampled in the chaos and was lucky to survive several building collapses. She tried to save a woman and her daughter who helped her but Drogon burnt them alive. As ash fell onto the destroyed city, Arya found a white horse and rode it to safety.

Find out which main characters died during episode 5.

Can’t wait for the next episode? Watch the trailer and read our preview for Game of Thrones 8×06 or read our 11 burning questions ahead of the finale.