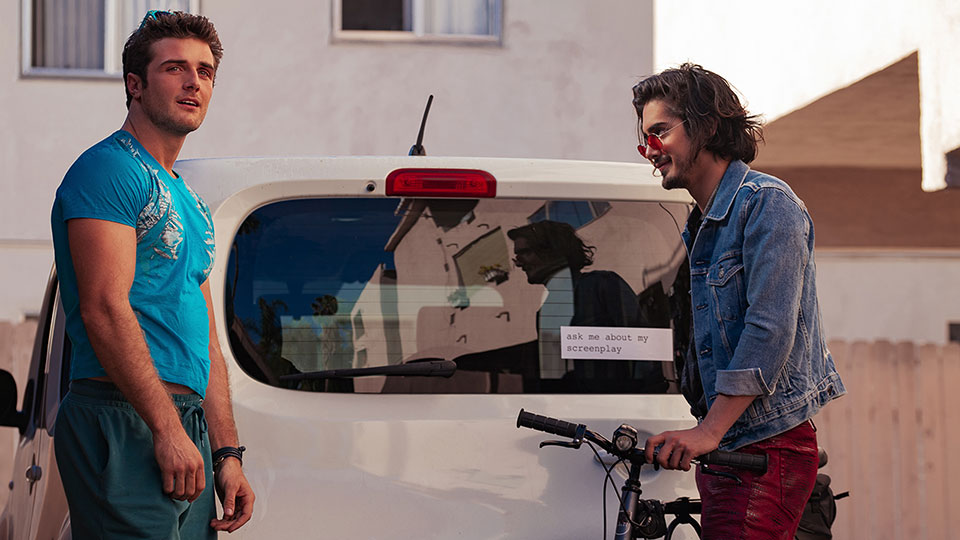 After a weird, wonderful and very wacky ride, the first season of Now Apocalypse came to a close this week but not before the four main characters went through a rollercoaster of emotions.

Carly (Kelli Berglund) had a row with Jethro (Desmond Chiam) after he found out about her side job as a cam girl. She was in no mood to explain herself and kicked Desmond out of her apartment so she could prepare for her meeting with STARZ.

At the same time Ford (Beau Mirchoff) turned up at Severine’s (Roxane Mesquida) apartment determined to save their relationship. Convinced she didn’t love him, Ford broke down and Severine, seeing the impact she’s having on him, decided to call time on their relationship.

As if two couples if jeopardy wasn’t enough Uly (Avan Jogia) had his bubble well and truly burst when Isaac (Jacob Artist) saw a text from Gabriel (Tyler Posey) on his phone. Uly couldn’t explain his relationship with Gabriel so Isaac decided that they needed to have a break from one another.

Miserable, Uly went to see Carly where he broke down and camped out on her sofa while she went for her meeting. He was interrupted by Ford who called to tell him about his breakup with Severine and the two hung out while they tried to process what had happened.

Remarkably everyone’s days got even worse. Carly turned up for her meeting with STARZ to discover that the exec she was meeting was one of her sex cam clients. That obviously didn’t make for an easy meeting and Carly realised there was very little chance of her getting any work from it.

Uly lost his job after forgetting to turn up and during a bike ride in the evening, he encountered the mysterious homeless man again. He convinced the man to talk to him and found out that he had been a jobbing actor until aliens turned up, raped him and forced him to have their babies.

With that bonkers revelation, the man asked Uly to kill him and as he pleaded, he got electrocuted by a telephone line and died while Uly looked on. Picking up his bike and returning home, Uly was surprised to find Gabriel waiting for him.

Ford meanwhile went to a bar where he bumped into Cleopatra (Nicole LaLiberte). After bursting into tears and revealing that his parents had been conned out of all their money, Ford attempted to hook up with Cleopatra in his car. He wasn’t able to go through with it and shoved her out of the car before speeding away.

That wasn’t the last he saw of her though as when he woke up from a nightmare, Cleopatra was stood half-naked in his room.

Severine had another tryst with the mysterious man (Jonathon Schaech) across the way from her apartment. They masturbated while they watched each other and then he asked if he could come to her apartment. Severine agreed but on his way over, the man was knocked down by a car and killed.

She was shaken but got her stuff and made her flight, leaving Los Angeles for Roswell.

After her disastrous STARZ meeting, Carly was faced with a drunk Jethro. She broke up with him and told him to leave. Jethro called his mother to tell her what had happened and as he hung up he dropped his keys.

As he leaned over to pick them up, Jethro was horrified to see an alien with its penis out. The alien pushed Jethro against a car, pulled his pants down and raped him.

And that’s where season one left us. Here’s hoping there’s a season two!