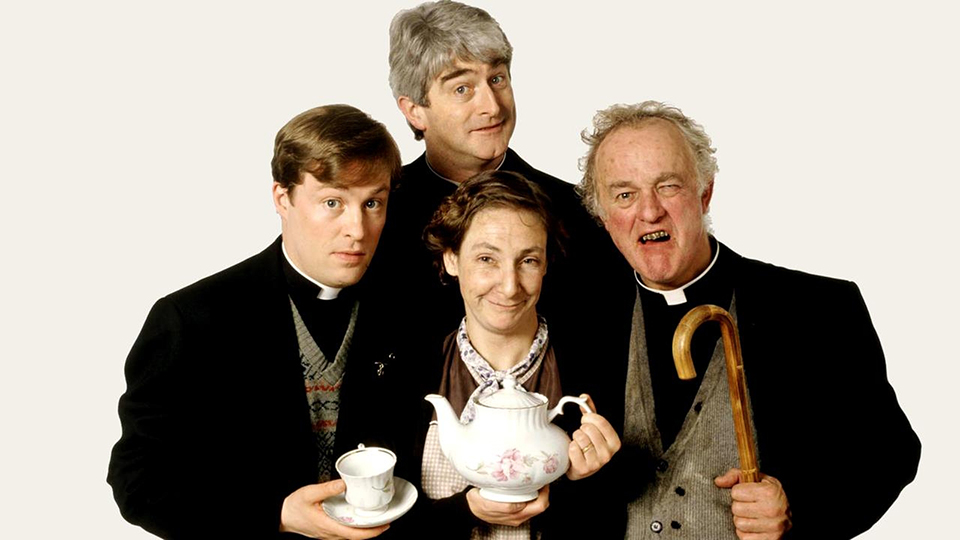 The 1990s were a period of renewed confidence in the UK. The economy continued to boom and Blair’s huge majority made ‘Cool Britannia’ a phenomenon. Oasis and Blur fought it out as most influential band, and the Spice Girls were everywhere. What a time to be alive! Sitcoms didn’t disappoint either, and offered a rich variety. Are any of your favourites missing from our list? (The Royle Family very nearly squeaked in – but there were just too many greats to choose from.)

There were surprisingly few episodes of Richard Curtis’ sitcom, but – a bit like the similarly short-lived Fawlty Towers, two series were separated by a few years (1994 and 1998), which gives the illusion that it ran and ran. Always cosy and warm, the Vicar of Dibley featured a host of great characters and is set in a quiet and very English village – the staple stuff of British sitcom. Dawn French plays the local vicar – a female was still unusual at the time – with help from the ditzy verger (Emma Chambers). Memorable supporting characters often made the comedy special, especially Roger Lloyd-Pack as the lascivious and rather disgusting Owen Newitt. A touch sentimental, like much of Curtis’ output, but consistently funny.

Although it started in late 1989, Birds of a Feather ran for almost a decade, ending in 1998 before it was revived in more recent years, so it’s hard not to root it in the 1990s. Laurence Marks’ and Maurice Gran’s comedy was solid, and raised enough laughs per episode to reward viewers, who stuck with it for over one hundred episodes. The appeal lay in the main roles for three strong female actors – and they were all perfectly cast. Pauline Quirke and Linda Robson had terrific rapport as the two sisters, but it was Lesley Joseph as their glamorous neighbour Dorien who stole the show. A sharp contrast to the dowdy siblings, Dorien’s outrageous wardrobe and man-eating sass were the ingredients that made the show sparkle.

Starting right at the end of the decade in 1999, Spaced quickly became a cult favourite. Simon Pegg and Jessica Stevenson’s unusual, quirky world about aspiring writers distracted by fantastic happenings was actually rather sweet and innocent. Mark Heap came to public attention with the first of his many oddball characters, as Brian, the artist who lives in the flat above them. It’s a shame the show didn’t run for long, but the fourteen episodes that made it to screen reward repeat viewing.

Jonathan Harvey’s comedy burst onto the screens in 1999. What made it so memorable was bringing together the talents of Kathy Burke and James Dreyfus, who have a great chemistry as flatmates, and who had both found success in earlier comedy series. Although Linda and Tom are in many ways unappealing characters, the actors playing them ensure that you don’t lose sympathy – at least not very often. Everyone knows someone like the delusional duo – Linda’s conviction that she’s a great beauty and Tom that he’s the next Olivier – and that’s what makes the show so universal and funny. References to unlikely 1990s hearthrobs such as Simon Shepherd (did your mum love Peak Practice?) are part of the charm.

The first of two major sitcoms of the 1990s featuring elderly heroes to make our list is Waiting for God, which ran from 1990 to 1994. It was set in a retirement home and starred the late, great Graham Crowden alongside the younger Stephanie Cole. As with Gimme, Gimme, Gimme, fate has thrown Tom and Diana together, and they aren’t natural friends, having very different views of life, but their rapport as they find ways to subvert the system is what drives the drama – and gives the audience plenty of laughs along the way. Sublimely good at times.

Steve Coogan’s famous grotesque creation had his own series in 1997 having arrived on screens in the satirical The Day Today in 1994. I’m Alan Partridge is a study in the desperation and denial of talentless celebrities. Having lost his stint on the BBC, Partridge plots his return to the limelight whilst slumming it on the road, with a graveyard slot as a DJ on Radio Norwich. Although the main character is mean-spirited, arrogant and delusional, Coogan finds ways to keep him sympathetic by revealing his many vulnerabilities. Often uncomfortable viewing, I’m Alan Partridge was way ahead of its time. Not long after came the relentless has-been celebrity-based shows that paraded before us those unable to accept defeat. Toe-curlingly embarrassing, but often ingenious.

Running from 1990 to 1995, Keeping Up Appearances arguably defined the English obsession with class better than any other situation comedy. Roy Clarke’s beautifully-observed series was one of the last great traditional sitcoms, which stretched credulity almost to breaking point with its large and comically exaggerated characters. Patricia Routledge’s Hyacinth Bucket is one of the all-time great comedy creations, and a study in pretentiousness and snobbery. Clive Swift is a perfect foil as her patient but long-suffering husband Richard, and there are many terrific supporting characters, including Geoffrey Hughes and Judy Cornwell as the working class relatives that are a source of profound shame to the socially-climbing Hyacinth. Although some of the storylines between episodes became repetitive (the vicar trying to avoid ‘the Bucket woman’, a call from the off-screen son Sheridan asking for money, daddy going missing, etc.), it was always a delight to watch, with cosiness in the familiarity.

Jennifer Saunders’ ingenious situation comedy, perhaps more than any of the other titles in our top ten, defined the 1990s. It captured something of the jet-setting lifestyle of the rich and famous. Edina Monsoon (Saunders) is the world’s worst mother, though thankfully her bright and bookish daughter Saffie (Julia Sawalha) is self-sufficient. Edina’s saving grace is that her best friend, the selfish Patsy Stone (the wonderful Joanna Lumley), is even heavier-drinking and more irresponsible than she is. The late June Whitfield, who made enormous contributions to British sitcoms, played Edina’s lovely but slightly batty mother, and there’s a great role for Jane Horrocks as the sweet-but-dim Bubble (we’ve all worked with one). Joanna Lumley’s outrageous Patsy is the defining image of the show. It was never as good when they later resurrected it – the characters live and breathe firmly in the 1990s.

2. One Foot in the Grave

There are two ways of viewing Victor Meldrew – both correct. In the flush of callow youth, Meldrew amuses as a grumpy old man shaking his fist at the world like mad old King Lear. When you grow a little older, the same episodes reveal themselves in a new light: Meldrew becomes a moral crusader whose grievances are legitimate. Suddenly you see him as a hero, willing to stick his neck over the parapet even though it’s likely to land him in trouble. David Renwick’s extraordinary creation can be enjoyed in many ways and by different age groups. In his ranting and raging about injustice, there is a touch of the Alf Garnett about Richard Wilson’s irascible character. But his essentially decency is never in question. When Annette Crosbie’s long-suffering Elizabeth considers having an affair to escape her marriage to the relentlessly prickly Victor, her suitor wonders how she can put up with someone as “insensitive” as him. “Victor’s the most sensitive man I’ve ever met. It’s why I love him. It’s also why I want to smash his head into a television screen most of the time,” she explains, ending any prospect of betraying him. Nuanced and tender as well as outrageously funny, One Foot in the Grave shines a light on married life and on English suburbia, with flashes of surreal genius. All the product of a single writer, and incredibly, David Renwick never turned in a dud script. A highlight is the episode in which they are caught in a traffic jam along with their neighbour Mrs Wharboys (the magnificently sympathetic Doreen Mantle). With little more than three actors stuck in a car, Renwick creates the purest of television gold that is more acutely observant about the human condition than anything you’d see at the National Theatre. All of life is contained within One Foot in the Grave.

When it first aired, Father Ted was divisive. Was it a silly, frivolous look at Catholicism, or a clever satire with a cartoonish quality? Since it has stood the test of time, remaining adored over twenty years after its final episode aired, we seem to have our answer. It’s pure comedy gold. Father Ted was easily the most quotable comedy show of the era. Not only were there instantly-catchy catchphrases such as, “Ah, go on, go on, go on, go on, go on…”, Father Jack’s monosyllabic sayings, and Ted’s oft-repeated refrain of, “God Almighty, Dougal,” but many individual lines that made it into the public consciousness which have had whole new leases of life as internet memes. “These cows are small. The ones in the field are far away,” will instantly get a laugh from fans, just as it’s impossible to see protestors’ placards without thinking of, “Careful now,” and “Down with this sort of thing”. Aficionados are never more than two minutes of conversation away from a Father Ted quotation. That in itself is an astounding achievement by writers Graham Linehan and Arthur Matthews. The sad death of lead actor Dermot Morgan the day after filming of the final episode (which meant that the third series aired posthumously) inevitably cast a poignant shadow over the show, but the fact that it lives on in hearts and minds is a tribute to Morgan’s timeless character. But Father Ted owes its success to a first-rate concept, cracking scripts and stories, and an ensemble cast that worked together perfectly.