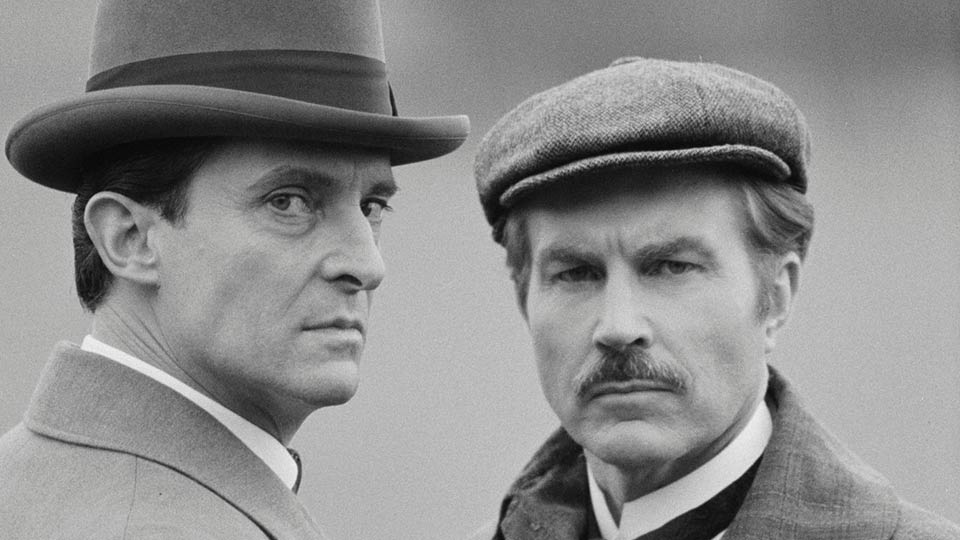 Granada’s Sherlock Holmes series ran from 1984-94, and in that decade, which covered two thirds of Arthur Conan Doyle’s original stories, Jeremy Brett established himself as the definitive Sherlock Holmes, who remains imperial and unequalled by rivals to the role.

Devotees of the series can argue the merits of which Watson they prefer – Burke or Hardwicke, and which producer was more to their taste – Michael Cox with his literary flair and reverence for the original texts, or June Wyndham Davies’ with her more operatic and romantic approach – but that inevitably leads to top picks entirely plucked from the first or second half of the run. What we’re attempting here is to highlight six episodes, listed chronologically, that pushed the boundaries, attempted a new approach, or revealed something new about the character of Sherlock Holmes.

Do you agree with our list? Are there episodes you feel had greater merit for a mention? We did think of popping Shoscombe Old Place on the list since it had the foresight to offer an early screen outing to a future big screen Dr Watson – Jude Law – but we chose those where the series, on its own merits, offers viewers something fresh, unusual or attention-grabbing.

Often considered one of Conan Doyle’s finest tales, where his mastery of succinct prose style in the short story format really shone, it was also highly successfully adapted for Granada as a perfect viewing experience, and the episode stands out as one of the glittering jewels of the series’ entire run. Everything falls into place: the perfect heroine (Rosalyn Landor), the perfect villain (Jeremy Kemp), a dilapidated stately home (Adlington Hall in Cheshire, which would pop up in the show regularly), and an intriguing mystery. When Holmes works out why the bellrope doesn’t ring, and the sinister purpose it really serves – the viewer witnesses an emotion not often associated with the protagonist – fear!

Holmes is the world’s first consulting detective, yet in this story, a client doesn’t come to seek his help – but a mystery finds him! After a bout of ill-health, Holmes agrees to a short break staying at the magnificent residence of Reginald Musgrave (Michael Culver), but when the surly butler (James Hazeldine) disappears, Holmes is intrigued, and realises the man had set about solving an old riddle that had been in the Musgrave family for generations. Determined to match the devious butler’s ingenuity, Holmes sets about solving the puzzle – and in the process unlocks hidden treasure from the English Civil War that results in him holding a long-buried relic of historical significance.

Another episode in which a problem finds Holmes whilst he’s on holiday! This time, the beautiful stately homes make way for stunning location filming in a different part of the country. Most of the series was shot in and around the North West of England (Liverpool, Manchester and Cheshire) and London, but The Devil’s Foot relocates to Cornwall. The bleak but beautiful scenery provides a delightful change, and adds greatly to the atmosphere. It’s also the story in which Jeremy Brett, conscious of the large audience of youngsters, requested that Holmes finally overcomes his addiction to cocaine, leading to a poignant scene on the beach. Did any other Sherlock Holmes have such a moment?

4. The Disappearance of Lady Frances Carfax (1991)

This instalment from the under-rated Case-Book of Sherlock Holmes also took the production team away from their usual surroundings and relocated to the stunning Lake District in Cumbria, though it is Edward Hardwicke’s amiable Watson who carries the bulk of the action. It is directed by John Madden (Mrs Brown, Shakespeare in Love), who was sadly only behind the camera for this one, because his visual flair takes the story to the next level. Will Lady Frances Carfax (Cheryl Campbell) be returned to her reformed lover Philip Green (Jack Klaff)? A bittersweet ending results from a temporary eclipse of Holmes’ brilliance, and his verdict that he has failed. In missing a vital clue the first time around, this is the case that will have given Holmes sleepless nights and proved that the world’s greatest detective isn’t infallible…

Based on Arthur Conan Doyle’s The Sussex Vampire, The Last Vampyre was a feature-length episode that greatly expanded on the source material. It is regularly cited as fans’ least favourite episode, for the controversial reason that it injected a supernatural element to the plot. Ghosts and Sherlock Holmes do not mix well, true, but it is testament to the confidence of the production team and the faith in their leading man, who could take an audience with him no matter what, that such an odd approach was tried. Holmes’s dreams play a part in moving along the muddled plot of The Eligible Bachelor at around the same time, but it is a much weaker story. If you can look past (pun intended) the apparitions here, then there’s a lot to enjoy in The Last Vampyre, not least brilliant performances by Keith Barron, Roy Marsden and Elizabeth Spriggs, and moments of intense Gothic horror.

This episode from the Memoirs of Sherlock Holmes, which was sadly the final outing of the series (Jeremy Brett’s death the following year ended all hopes of another), was the first to merge two of Arthur Conan Doyle’s stories – The Mazarin Stone and The Three Garridebs. It was another in which Brett’s ill health forced him to take a back seat, but the two storylines are ably carried by Edward Hardwicke as Watson and Charles Gray as Mycroft Holmes. The later stories found a more mellow, melancholic and sedate Holmes, as the writers adapted to the star’s failing health. But from the energetic, piercing and often manic Holmes of the early episodes to the darker, paler and more introverted Holmes a decade later, Jeremy Brett was always entirely compelling and magnetic. “Brother mine. Bravo!” sends shivers down the spine.

That’s our selection of episodes worth another look. But with Granada’s Sherlock Holmes, we had the right actor in the right part at the right time. It was a glittering end to a distinguished career, and secured Jeremy Brett’s place in the hearts and minds of audiences, both then and in the decades since. It’s a series that, once you’re hooked, calls you back…