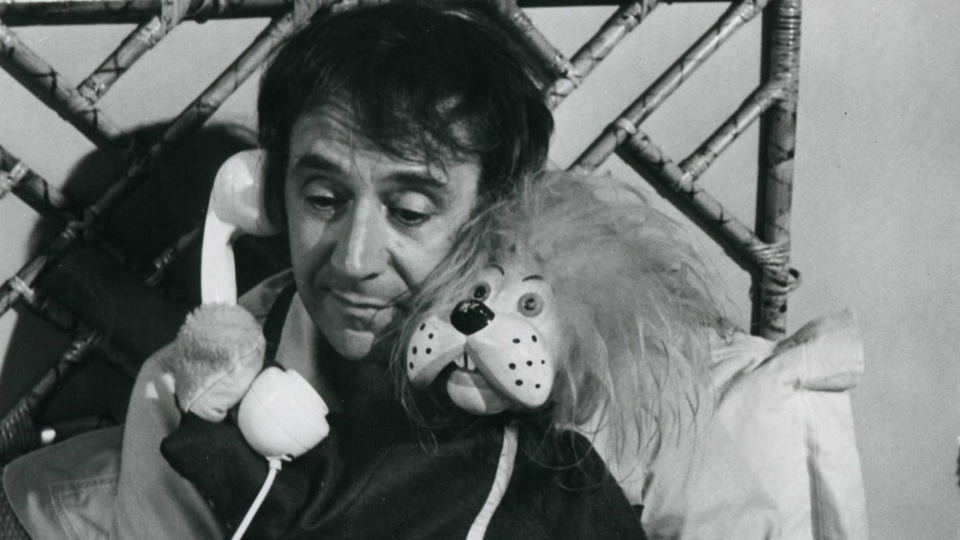 Robert Gillespie as Dudley Rush in Keep It In The Family

After the dourness of the 1970s, the following decade was much more colourful and self-confident, and this reflected in the increasingly audacious premises of the best situation comedies of the era. There were still perennial British interests of class and social status, with observations on suburban life providing plenty of opportunity for writers.

At the same time, much-loved characters from across society were born, but we also saw sitcoms revolving around establishment figures running the country as well as the adventures of the last human aboard a spaceship and a sarcastic anti-hero whose personas reoccurred in different time periods.

There may be cult classics that didn’t make the list, such as broad student-favourite The Young Ones, but we aim to in shows those that pushed at the boundaries and had a huge impact at the time, or remain indelibly ingrained in British popular culture.

It was a highly original concept to take a sitcom and place it outside of a domestic setting. Red Dwarf was a science-fiction sitcom, placing the last human in the far future aboard a spaceship with the ancestor of a domestic cat, a robot, a hologram and a slightly dotty computer for company. The first few series, made in the late 1980s, were set almost entirely in the same few rooms of the ship, making it a bona fide sitcom. However, later series became more action and adventure, which pushed the limits of its definition. There’s something to be said for those early series being the best, when the dialogue carried the humour and characterisation was more of a priority than plot. It made stars of Craig Charles (Coronation Street) and Chris Barrie (The Brittas Empire).

The sitcom set in a holiday camp ran for almost the entire duration of the 1980s (1980-88) and was another smash hit for Dad’s Army creators David Croft and Jimmy Perry. As with their earlier masterpiece, Hi-de-Hi! succeeded by using a large ensemble cast. The Yellowcoats entertain their guests, but tensions exist between them. Amusing, especially to anyone who’s known out-of-work actors and failed entertainers slumming it for their art. Paul Shane and Ruth Madoc were strongly associated with the show, but it was Su Pollard who stole every scene as Peggy the maid, who is desperate to rise to the dizzy heights of being a Yellowcoat. If you’ve ever stayed at an English holiday camp, you’re likely to love the show, especially if you’re nostalgic for that now largely disappeared tradition.

Another long-running sitcom from the mind of David Croft (Dad’s Army, Hi-de-Hi!), ‘Allo ‘Allo! was set during WWII in Nazi-occupied France, and it graced the airwaves from 1982 to 1992. Its premise found comic potential in aspects of French life during occupation, such as the looting of famous and valuable works of art, and attempts by the Resistance to overthrow their oppressors and contact others outside of France to help them. Much of the comedy is delightfully broad and full of sexual innuendo. Gorden Kaye and Carmen Silvera are Rene and Edith Artois, café owners upon whose premises all of the competing players descend, from German officers and the Gestapo to English spies and airmen. Guy Siner memorably plays Lieutenant Gruber, a homosexual German officer with a soft spot for Rene.

The clever political satire ran in its former guise from 1980-84, and then again in 1986-88. It follows the adventures of Jim Hacker (Paul Eddington), who at first is a Minister before his later elevation to becoming the unlikely occupant of Number 10. At every turn, Hacker is outwitted and outmanoeuvred by his Permanent Secretary, the sly and cunning Sir Humphrey Appleby (Nigel Hawthorne), who represents the indolent civil service reluctant to enact any change or accept any new policies. Principal Private Secretary Bernard Woolley (Derek Fowlds) is often used in the tug-of-war battle between Hacker and Appleby. With sparkling scripts by Antony Jay and Jonathan Lynn, Yes Minister and Yes, Prime Minister maintained a high standard and followed the tradition of Roman comedy and more modern derivations such as Jeeves and Wooster, of depicting a bright ‘slave’ constantly outsmarting or resolving problems for their social betters. The British Prime Minister at the time, Margaret Thatcher, adored the show.

Although it started in the 1970s, Open all Hours ran up until 1985. It featured Porridge-star Ronnie Barker, one of Britain’s greatest comedy character actors, alongside David Jason, who would have significant success with Only Fools and Horses. Roy Clarke, who also wrote the long-running sitcoms Last of the Summer Wine and Keeping Up Appearances, based Open All Hours in a small grocer’s shop in Yorkshire. The set-up is similar to Steptoe and Son, though in this case it’s the miserly, miserable uncle Arkwright (Barker) who keeps his nephew Granville (David Jason) employed in his shop. The shy but disappointed Granville hopes for a better life for himself, but is saddled by duty to the uncle who brought him up. Few writers match Roy Clarke for observing the minutiae of life and creating memorable characters, though Open All Hours is arguably his masterpiece.

Carla Lane’s Liverpool-based sitcom defines the 1980s with its depiction of a working class Catholic family, and their hopes and aspirations. Jean Boht played the matriarchal Ma Boswell (Nellie), a typical strong, stoical and principled character in the city. Ronald Forfar as the dishevelled, unprincipled and unfaithful husband, Freddie Boswell, was the perfect foil. Peter Howitt, now a successful film director, played heartthrob eldest son Joey (Graham Bickley took over the part in later series), and Bryan Murray was a memorable irregular character as the Irish cousin ‘Shifty’. Running from 1986 to 1991, the many dramas of the Boswell family were a sentimental view of life in Merseyside, but the series was a hit with viewers and had plenty of heart.

4. Keep It In The Family

The eccentric Rush family featured in Brian Cooke’s sitcom that ran for five series from 1980-83. It starred Robert Gillespie as head of the household, Dudley Rush, an illustrator who writes a comic strip called Barney the Bionic Bulldog. Gillespie had featured as a guest artist in virtually every major British sitcom of the 1960s and 70s, and Cooke wrote Keep It In The Family especially for him. Pauline Yates, who had starred opposite Leonard Rossiter in The Rise and Fall of Reginald Perrin, is better paired against Gillespie’s warmer and madder Dudley Rush, and, unusually for a sitcom, they are depicted as a devoted couple with an active sex life. The twist is that their two teenage daughters live in the downstairs flat, so they have some independence, but their doting parents can keep an eye on them, including any male company they bring home. This brings them in to their parents’ amusing shenanigans. Glyn Houston is wonderful as Dudley’s long-suffering editor, and although the first few series which are written by Cooke are stronger, there’s a good laugh to minute ratio in the later ones after Cooke had left to make his fortune in Hollywood.

John Esmonde and Bob Larbey’s charming suburban domestic comedy ran on the BBC for four seasons from 1984-89. It teamed up the late Richard Briers (who had also appeared in the writing duo’s earlier sitcom The Good Life) with Penelope Wilton. Briers had by this time shaken off his Tom Good persona, and here plays prickly, socially uneasy Martin Bryce, whose ordered life is thrown into turmoil by the arrival of the suave, sophisticated next-door neighbour Paul (Peter Egan). Martin’s antagonism with Paul, whose refusal to share the animosity further infuriates Martin, is what drives the comedy. There are memorable comic creations as supporting characters such as the doting couple Howard and Hilda, who are always wearing matching jumpers and taking a cheery view of the world.

Running from 1983-89, the Blackadder series by Richard Curtis and Ben Elton (apart from the first series, which Rowan Atkinson co-wrote with Curtis) tried a clever twist on the traditional sitcom by selecting specific historical periods, starting in the Middle Ages and ending with World War One. With each jump in time, the same characters would reoccur, allowing the ensemble of actors to recreate their parts in different eras. The masterstroke was to make Blackadder scheming and intelligent yet subservient to stupider characters with higher status from the second season. The first outing isn’t a complete write-off, but it’s by far the weakest of the bunch, despite boasting the wonderful Brian Blessed in larger-than-life (what else?) guise as the king. The third and final seasons would bring in the talented comedy duo Hugh Laurie and Stephen Fry. The best British character actors (Denis Lill, Tom Baker, Miriam Margolyes) pop up in supporting parts. Blackadder is easily the cleverest and most quotable sitcom of the 1980s, and Rowan Atkinson’s peerless lead performance is the icing on the cake.


1. Only Fools and Horses

The original run started in 1981, though Only Fools and Horses became a firm favourite with television viewers and a staple of the schedules, especially at Christmastime. It was one of those rare series that had something for everyone, which is why it occupies the number one spot. Often, whole families would sit down to watch the same show together, and colleagues would discuss the funniest moments with one another at work the following day. Few shows have ever enjoyed such wide appeal. The part of Del Boy cemented the already hugely popular David Jason’s status as a national treasure and icon, and he had in Nicholas Lyndhurst (who also starred in The Two of Us – the worst sitcom of the 1980s) the perfect sparring partner. John Sullivan’s depiction of Peckham and working class South East London life is neither too sentimental nor sanitised, but judges it perfectly so that the characters are entirely believable and loveable. Amongst the wider ensemble cast there’s plenty of room for broader comic stereotypes, such as the dozy Trigger (Roger Lloyd-Pack) and the sleazy Boycie (John Challis). Always good-hearted, and rarely anything other than hilariously funny, Only Fools and Horses was a phenomenally successful show, and its characters entered the public psyche. “Rodney, you plonker,” (and its many derivations) is a catchphrase that will raise a smile for many years to come.