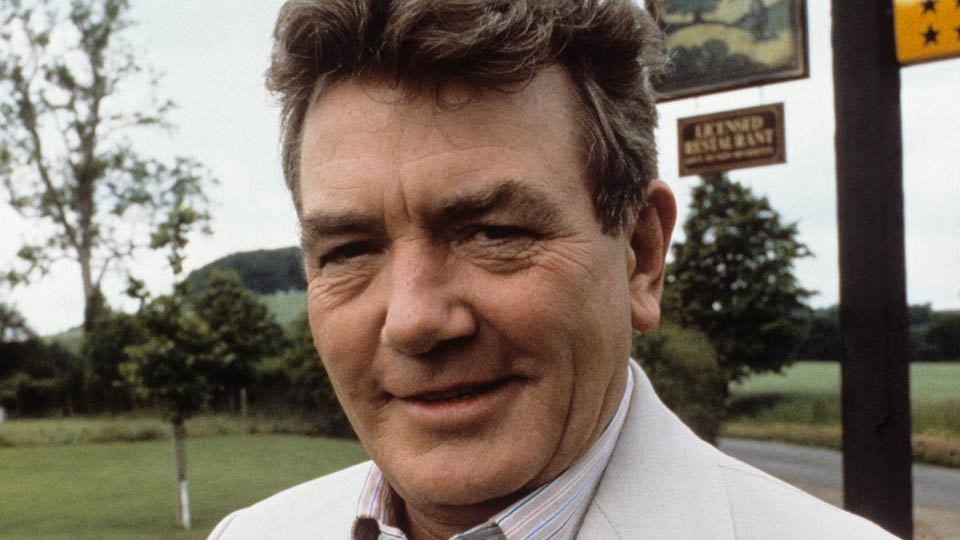 This month saw the passing of the legendary Albert Finney, one of the great British actors of his generation who was universally acclaimed and successful in every medium. Whether as an angry young man in Saturday Night, Sunday Morning, or as James Bond’s eccentric Scottish gamekeeper in Skyfall, or any career highlight in between, Finney enthralled audiences with deft, believable and compelling characterisations.

The Green Man, a British television production that first aired in 1990, sees Finney cast as Maurice Allington, the eccentric owner of the quaint English country inn, The Green Man. A drunkard and a letch, as well as a bon vivant, Maurice is a larger-than-life character who uses his personal charm to try to navigate the relationships in his turbulent domestic life. With the mother of his children deceased following a nasty accident some years earlier, Maurice is now partnered with his colleague Joyce (Linda Marlowe) but he takes a shine to the much younger Diana (Sarah Berger), who is in a rocky relationship of her own. In addition to the somewhat bawdy and farcical drama, there is a supernatural element. The inn is haunted by a Seventeenth Century scholar by the name of Underhill (Michael Culver). When Maurice comes to the attention of Underhill, the hauntings take a turn for the sinister.

The Green Man is adapted for television by Malcom Bradbury from a short story by Kingsley Amis, and the three 50-minute episodes are presented on this DVD.

A strongly positive point is the cast. The wonderful Michael Hordern has a small but impactful role as Gramps, Maurice’s elderly father. Josie Lawrence is as impressive as always as Maurice’s spirited daughter-in-law, and Nickolas Grace is very funny as a homosexual vicar who doesn’t believe in the afterlife, whom Maurice drags into performing an exorcism. Naturally, Albert Finney, who was BAFTA-nominated for his role, is impressive as Maurice. By every conceivable measure, Maurice is an unpleasant character: vain, selfish and immoral. Yet Finney brings out Maurice’s vulnerability and ensures that not only does the audience follow him, but even sympathises with his predicament. There are also some excellent visual effects, such as when Maurice does a spot of grave-robbing by torchlight and digs up relics from the past that are better left buried.

The problem with The Green Man is that the tone and themes are rather muddled. The ghost story element aspires to be as creepy as MR James’s A Warning to the Curious (without succeeding). With the exception of the humour Nickolas Grace brings to the part of the vicar, the comedy doesn’t rise sufficiently to the surface. The theme of paganism, and Maurice’s fondness for the Bacchanalian pursuits of love-making and drunkenness, isn’t satisfactorily unthreaded from general events, either. Viewers may well watch the full drama and be unsure if they were meant to laugh or be terrified – and a scene in which Albert Finney is attacked in the bath by a spectral bat is perhaps the moment where that uncertainty presses keenest.

Overall, Albert Finney’s great central performance is the selling point for The Green Man. His magnetic screen presence is always a joy to watch, and so it proves with this television drama. Those who have a penchant for well-produced British drama shot on film will find a lot to enjoy. There aren’t any extras on the disc, so the series stands on its own merits in this release. This is a great opportunity to enjoy the talents of the much-missed Albert Finney in something you might not have seen before – or at least not for three decades!