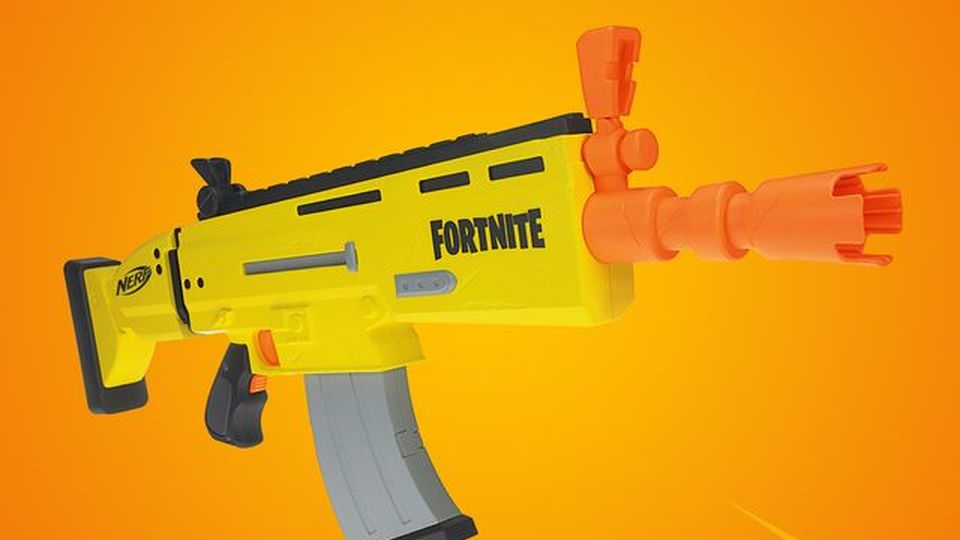 The Nerf Elite Fortnite SP-L is the smaller of the two blasters but is still very chunky. It’s made of strong plastic and certainly feels like it can take the punishment of some rough play. It comes with six darts and can hold three at a time. It’s a single shot blaster and you have to rearm it after each dart. This is done by pulling the top sights backwards and then forwards again, this loads the next dart and primes the air to blast the dart.

The barrel is removable meaning you can make the blaster much more compact but at the cost of accuracy. With the barrel attached it’s a surprisingly accurate piece of kit.

The Nerf Elite Fortnite AR-L is a whole different ball game. Its looks are based on the assault rifle from the game and it needs batteries to power its automatic fire. The AR-L is made of the same durable plastic as the SP-L and retains the chunky, rugged feel. It’s also massive in comparison. I’m six foot four and the blaster still felt quite big. My five year old struggled with it as his hands were a bit too small.

This beast uses a magazine that can hold ten Nerf darts at a time and you can empty the mag in about three seconds. To fire the darts you need to hold down a button on the handle to prime the motor, this needs to be held down continuously as you pull the trigger. This was no problem for me but could be harder for those with smaller hands.

I found the AR-L to be far less accurate than the SP-L but this could be down to being trigger happy and firing the darts as fast as I could. The AR-L comes with twenty darts in total but you’ll need to provide your own batteries. So that you don’t spend all of your time reloading the magazine I’d recommend getting more magazines, from what I can see these are only available from third parties so I don’t know how good the quality would be.

Both blasters worked flawlessly and were easy to use and reload. They both feel very chunky and robust and I doubt they’ll be breaking any time soon, especially the SP-L as it has no mechanical parts. They are both really fun to use and pack a fair punch so I’d made sure you keep anything fragile out of the way before letting the kids loose.

The only downside I can see is the constant reloading. As I mentioned, you can buy third-party magazines for the AR-L which could remove some of the pain of reloading. If it wasn’t for this constant reloading every minute or so I’d give these blasters a perfect score. I’d also recommend buying some extra darts as they do have quite a long range on them and I can see them going over the neighbour’s fence and being lost forever.

The other blasters in the range are the Fortnite Microshots of which there are three different variants.