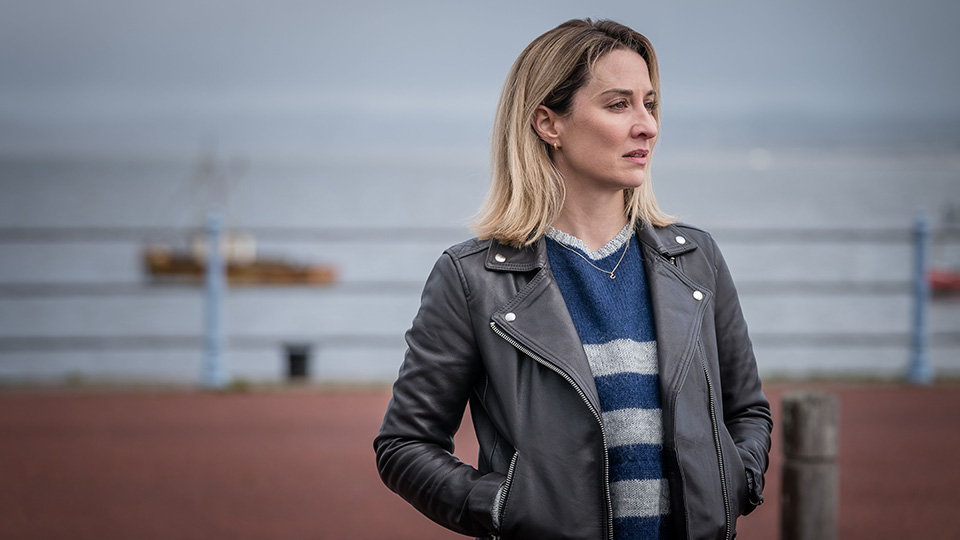 Lisa (Morven Christie) may have been suspended but that didn’t stop her from tying up a number of loose ends on the final episode of The Bay.

After being caught out last week by Med (Taheen Modak), Lisa attempted to pick herself back up while she lied to her family about her suspension. Going through the motions and pretending that she was getting ready for work, Lisa had an unexpected confrontation with Tom (Richard Huw) who accused her of preventing Penny (Lindsey Coulson) from living her own life. When Lisa tried to answer back, Tom pointed out that she didn’t even know where her own children were.

Lisa left home and after a short drive, stopped her car and broke down in tears. She pulled herself together and tried to call Abbie (Imogen King) but all she could get was her voicemail. Deciding to track her daughter down, Lisa put in a call to Karen (Erin Shanagher) to ask her where she’d spotted Abbie a few days earlier.

Heading to the bad side of town, Lisa pulled her car over and witnessed Abbie being given a parcel of drugs by Vincent (Adam Long). Once Vincent left the scene, Lisa followed Abbie on foot and took a note of Vincent’s number plate. She continued to trail Abbie until she saw her delivering drugs to someone. At that point she made herself known, the person Abbie was dealing to ran away, and Lisa realised the full horror of what her daughter had been up to.

A heart-to-heart over a coffee revealed the true horror of Abbie’s situation and Lisa realised that she’d been so consumed with work, that she’d pretty much ignored her family. After taking Abbie home, Lisa headed to the station where she cornered Med and pleaded with him to look into Vincent. He reluctantly agreed and quickly found out that Vincent was really called Victor Cook and he was wanted by Manchester police for a number of offences.

Armed with that information Lisa headed off to find out more about the man that had been manipulating Abbie. She found Vincent’s building site and entered the premises by scrambling over a wall at the back. Vincent was on the phone and Lisa followed him up a set of stairs where she witnessed him accessing his drugs stash. She took some photos and almost gave herself away when she received a text message and her phone beeped.

Lisa quickly got out of the building and as she called Med to ask him to get the drug squad down, she bumped into Vincent. Realising he’d been made, Vincent sent his workers home and started packing up the drugs but before he got chance to escape, the drug squad arrived and arrested him.

At the police station both Sean (Jonas Armstrong) and Holly (Darci Shaw) were refusing to talk. Sean insisted he couldn’t name names when it came to his drug dealing and Holly continued to deny there was a man with her on the night that Dylan (Noah Valentine) was killed.

With Vincent in custody, both Sean and Holly were shown his photo. Holly said she didn’t know who he was but Sean admitted that Vincent was the man he’d been getting his drugs from. He then refused to say any more, insisting that he would only speak to Lisa.

Lisa’s suspension meant that Med was now the family liaison officer for the Meredith family but Jess (Chanel Cresswell) made it very clear that she didn’t trust him. Matters were made worse when Tony (Daniel Ryan) insisted on releasing a statement saying the police had arrested Holly for her brother’s murder.

Sean and Jess had a brief but tense meeting. He tried to convince her that everything he’d done was for the good of the family but she made it very clear she wasn’t interested and that they were over.

That statement had an effect though as an anonymous call was received at the station from someone who claimed that Holly was innocent. Believing the caller to the credible, the team traced the call and found it was made from Councillor Brian Hesketh’s (Roger Barclay) office.

As the team began to realise who the real murderer was, Lisa stayed one step ahead. She had another conversation with Abbie and asked what had happened between her and Sam (Louis Greatorex). Abbie admitted that she liked Sam but had a feeling he was seeing someone else and that in the past week he’d been mean to her.

A lightbulb went off in Lisa’s head and she decided to pay Sam a visit. She found him at his house and asked if she could have a chat with him, under the ruse that she wanted to pay him back the money he’d lent to Abbie. As she walked through the hallway she saw the trainers that matched those on the CCTV footage and when Sam pulled his wallet out, Lisa noticed an ultrasound picture.

She gently asked Sam if he had anything he wanted to tell her and he broke down as he revealed the truth. He was the person responsible for Dylan’s death but it had been a tragic accident. Sam and Holly had been planning to run away together but Dylan tried to stop them. That resulted in a fight and Sam threw a single punch, knocking Dylan to the floor. As Dylan went down, he cracked his head on some steps and died.

Lisa took Sam into custody and Holly was released from the station and allowed to return home to her family. Tony asked Lisa if she would speak to Sean and she agreed. Sean told her he would give up the names of the people involved in the drug business if Lisa promised to keep an eye on his family. When she confirmed she would, Sean began to talk.

Back at home Lisa was visited by Tony who told her that she’d done good work but her suspension still stood. He explained that she would have to go through an inquiry and face the disciplinary board. Tony also revealed that Nick (Matthew McNulty) had been released by the police and would face no further charges.

As the episode drew to a close, Lisa went out with the kids and they bumped into Jess and her family. Lisa told Jess that if she ever needed anything, to let her know and a tearful Jess, who had just spread her son’s ashes into The Bay, thanked her. The two women exchanged an understanding look before going their separate ways.

The Bay is available to buy on DVD from Monday 6th May 2019. You can pre-order it now.