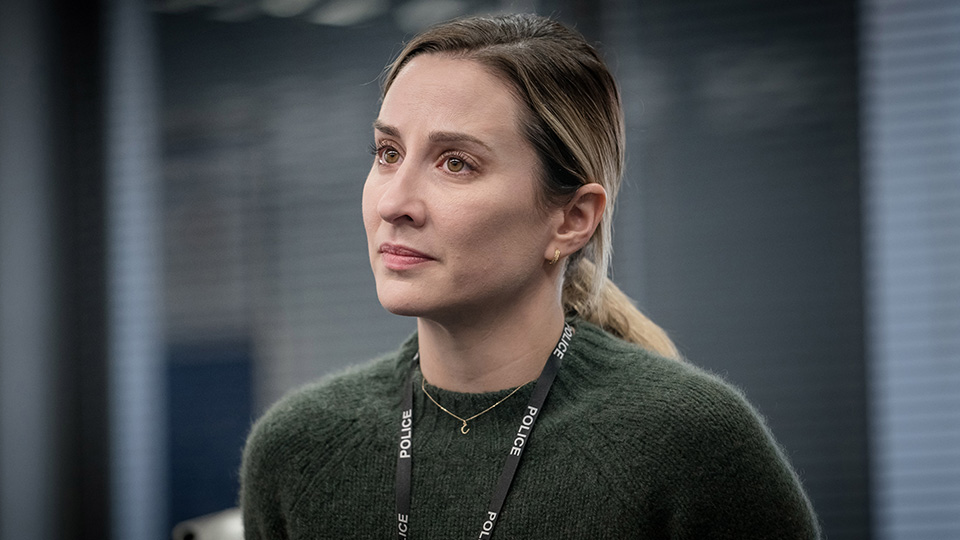 The shocking discovery at the end of last week’s episode was nothing compared to what transpired on The Bay tonight.

Holly (Darci Shaw) was found safe and shell-shocked in an old summer camp. She was taken straight to hospital where she refused to speak to anyone and would only see her mum Jess (Chanel Cresswell). Lisa helped to get Holly to agree to having tests done so they could piece together what might have happened to her.

When the tests came back it was revealed that Holly was pregnant but she wouldn’t talk about who the father was. Holly was then discharged from the hospital and taken to the police station for questioning, because as Tony (Daniel Ryan) reminded everyone, she’s still a suspect in Dylan’s (Noah Valentine) murder.

Tony and Lisa led the questioning and tried to get Holly to tell them who the third person was. She insisted there was no third person but did admit she and Dylan had a fight because he knew she was pregnant. Holly continued to lie about her intent so Lisa pushed her to get her to admit that she was planning to run away. The last thing they got from her is that the last time she saw Dylan, he was alive.

Tony made a statement to the press and was interrupted by Sam’s father Councillor Brian Hesketh (Roger Barclay) who told him he needed to be kept up to date about Holly’s situation. Is it just me, or is he looking a bit shifty right now?

Back in the investigation room, Lisa dug deeper with Holly where she found out that Nick (Matthew McNulty) had helped her try to run away. She lied again about buying two tickets but said that she didn’t want to be like her mother, and that’s why she was planning to run away so she could have a fresh start.

Holly and Jess were put up in a hotel while the investigation continued and Lisa went to pick up some of Holly’s things from Sean (Jonas Armstrong). He pressed to find out when he could see her and Lisa responded that Holly didn’t want to see anyone.

As Jess showered in the hotel, Holly slipped out to make a phone call where we saw her telling the person on the other end that she loved them and asked the person to meet her that night outside the hotel. A hysterical Jess was calmed down by Lisa while Holly made her way to the hospital after finding out that Nick had been hurt. He told her it was Sean that caused his injuries but they were interrupted when Lisa arrived to collect her.

Angry, Holly told Lisa she had no idea what Sean was capable of and pointed her in the direction of her step-father’s boat. Lisa got a team down there quickly and they found drugs stashed in a hidden compartment leading to Sean’s arrest.

Holly was taken back in for questioning and she revealed more about her relationship with Sean. She told Lisa that she wasn’t surprised by his drug dealing and emphasised that he didn’t care for the family or her mother. Holly also admitted that the money in her backpack was stolen from Sean’s boat.

Meanwhile Med (Taheen Modak) decided to do a little investigating of his own when the footage from the pub on the night of the twins’ disappearance went missing. He’d had his interest piqued earlier when he heard Krzysztof (Jordan Mifsud) arguing with his wife, telling her she wasn’t the only woman Sean slept with that night.

Med attempted to ask Lisa for help but she was wrapped up watching Sean being interviewed. He had a quick look in her desk and found the USB stick with the footage on, only to find the footage had been deleted.

Turning detective, Med went to the pub where he got his hands on the footage and found out Lisa’s dirty secret.

As night came, Holly tried to slip out but Jess wouldn’t take her eyes off her. Holly looked out the window and a man was waiting for her, wearing the same trainers that were in the CCTV footage from the train station.

Nick was taken back in for questioning and he finally talked about how he found her upset on the night Dylan was murdered. He admitted that he took her to the club but slipped up by revealing that Holly did know Dylan was dead before the police did. That landed him in hot water for obstructing the course of justice and he was arrested.

Holly returned to questioning again and was pushed about the person she was with on the night Dylan was murdered. She broke down and confessed to the murder but Lisa was unconvinced because Holly had no idea that Dylan’s body had been moved.

Once Lisa finished, Med took her outside and told her that he knew about her and Sean. She asked what he was going to do with the information and he said he wasn’t sure. As they carried on talking, Jess walked out and heard everything. Lisa tried to get Jess back on side but failed.

Left with no choice, Lisa marched into Tony’s office and told him what she’d done. As she broke down in tears, Tony took her badge and told her to get her things and leave.

Unfortunately Lisa’s kids continued to hog precious screentime this week. Rob (Art Parkinson) tried to pawn Penny’s (Lindsey Coulson) wedding rings but the antique dealer he approached reported him to the police. Not only did he have to face the wrath of his gran, Rob also had to come clean to Lisa who told him he had to earn her trust back and pay everyone back he’d stolen from.

Abbie (Imogen) carried on being Vincent’s (Adam Long) drug pusher and got herself into a hairy situation with two addicts. Trapped inside their house, she texted Sam (Louis Greatorex) for help. Like the sap he is, he saved the day but not before badly injuring his hand.

Vincent wasn’t best pleased and was controlling with Abbie when she told him she wanted out and he threatened Sam.

The Bay airs its final episode at 9pm Wednesday on ITV.