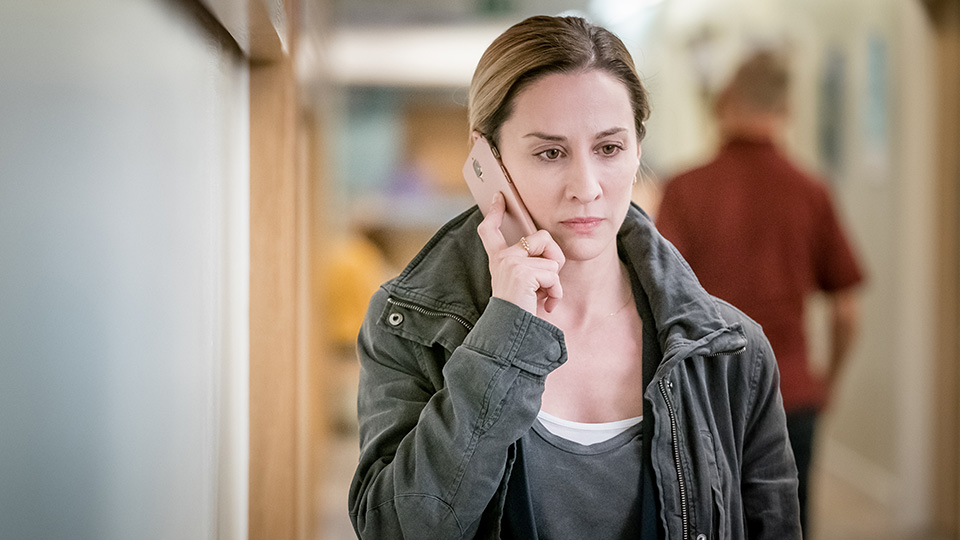 Lisa (Morven Christie) connected the dots and made a surprising discovery on the latest episode of The Bay.

Nick (Matthew McNulty) fought for his life this week after being dumped outside the hospital by Sean (Jonas Armstrong). A partial number plate caught on CCTV and a bit of help from Stew (Simon Manyonda) led Lisa to Hanna (Ellie Duckles) who confirmed that the van was Krzysztof’s (Jordan Mifsud) but that he’d lent it to Sean.

Lisa’s next stop was the docks to confront Sean. He attempted to deny he’d had anything to do with what happened to Nick but quickly confessed. Lisa told him she was going to have to take him in to the station and he retaliated by threatening to reveal that she’d been hiding her secret tryst with him. Deciding to call his bluff, Lisa told Sean to do what he needed to but made sure he knew that she was aware of his affair with Hanna.

Adamant that Nick knew something, Sean agreed to go to the station for questioning. Tony (Daniel Ryan) sent Lisa to update Jess (Chanel Cresswell) while he questioned Sean. Lisa told Jess what Sean had done and she admitted she was proud of him. Ryan (Philip Hill-Pearson) was in the room at the time along with Margaret (Tracie Bennett), and Lisa asked his whereabouts. Margaret gave him an alibi but Lisa wasn’t convinced.

Back at the station Tony turned his questioning of Sean to the subject of Ryan, which made Sean a little twitchy.

Meanwhile Med (Taheen Modak) spent much of the episode with Nick’s mum Sue (Hazel Ellerby) and he managed to get some information out of her about her son’s usual haunts. He passed that information on to the team but searches of the locations turned up nothing.

Lisa arrived at the station with Jess and was greeted by Hanna who protested Sean’s innocence. She admitted that she’d been told it was Ryan that beat up Nick and not Sean. That led to Sean’s release from the station but he was told he had to adhere to a strict curfew.

Hanna’s honesty resulted in Krzysztof and Ryan’s arrests. The police searched both men’s homes and in Ryan’s room they found lots of bagged up money and a pair of blood-spattered jeans.

Ryan was questioned and Tony showed him photos of the money they’d found in his room. When Ryan denied he’d given any to Holly (Darci Shaw), Tony pointed out that the money found in her back pack was bagged up in the exact same way Ryan had bagged his up. Ryan was evasive about where he got the money from, insisting it was through work.

Nick woke up in hospital and Lisa dashed straight to his bedside to question him. He became agitated saying he needed to be somewhere and when Lisa tried to calm him down, he began singing. Sue noted that the song was one he sang at a summer camp, and Lisa realised that was the location he should have been at.

After getting the details from Sue, Lisa and the team rushed over to the abandoned summer camp. Searching the complex, Lisa took a trip down some stairs into a hidden area and found a locked door with a light coming from underneath it. After kicking in the door, Lisa was shocked to find a shell-shocked Holly sat on a dirty mattress, looking terrified.

Lisa’s kids continued to take up precious screen time with storylines no one cares about. Abbie (Imogen King) continued to lie to Vincent (Adam Long) and made him believe that her schoolmate Wilko (Maximus Evans) had short-changed him for the drugs that Sam (Louis Greatorex) flushed down the toilet in last week’s episode.

That lie saw Wilko beaten up and Abbie continuing to do Vincent’s dirty work. She was caught in the bad part of town by Karen (Erin Shanagher), who promptly told Lisa.

Rob (Art Parkinson) meanwhile tried to get out of his peer pressure situation but when he tried, he was told he needed to pay £500 to a bank account. After Penny (Lindsey Coulson) decided to move back into Lisa’s house, Rob saw an opportunity to steal his gran’s jewellery to make a bit of cash.