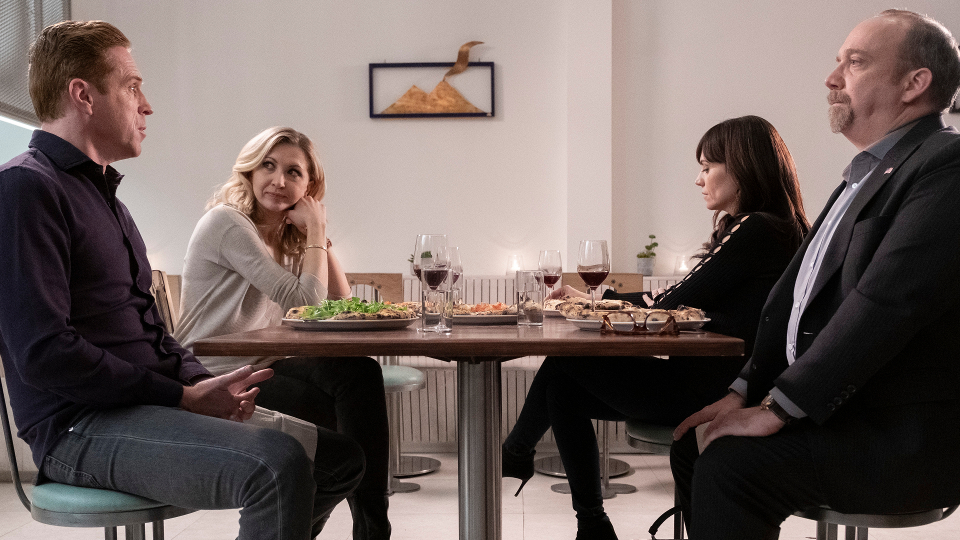 On the fifth episode of Billions season four, Wendy (Maggie Siff) dealt with the consequences of Chuck’s (Paul Giamatti) actions.

The episode opened up with Chuck and Wendy out for pizza with Axe (Damian Lewis) and Rebecca (Nina Arianda). It was the first time Wendy had been out since Chuck made the details of their love for sadomasochism public. She was still fuming with him and it didn’t take long before she started going at him. Wendy explained how meeting someone used to mean she was a blank slate but now they all knew very personal information about her.

Rebecca chimed in that she saw it differently. Of course people would talk about it and be interested but after that they’d all go back to worrying about their own problems. Rebecca said she’d like to make a fresh start and Wendy agreed. It looks like they could become good friends and went off outside together for a cigarette.

While they were gone, Chuck and Axe had their own chat. Axe was sure it would blow over and explained how angry Wendy had been at him in the past. Axe then called on Chuck for his next favour, he wanted Taylor (Asia Kate Dillion) put in jail. Chuck wanted to know what they’d done that was illegal and Axe said it didn’t matter as it never stopped Chuck before.

Wendy arrived at work and made a beeline for her office. She kept the blinds down and the lights off so that no one would bother her.

At Taylor Mason Capital, Taylor was starting to panick since losing Andolov’s (John Malkovich) money. They briefed the team that she never wanted to take Andolov’s money but since they did they now miss it. They needed to find money fast. Sara (Samantha Mathis) had made a new hire. A young girl named Lauren Turner (Jade Eshete) who was sat swigging pickle juice to cure her hangover. They tasked Lauren with landing an appointment with the firefighters’ fund knowing they had the cash and were staying clear of Axe. Lauren secured the meeting and Taylor’s pitch secured the funding they needed.

Meanwhile, Axe had a visit from John Rice (Seth Gabel). He was the son of a friend of Axe’s who died in the 9/11 attacks. Rice was there to return the money that Axe had invested for a college fund plus interest. Axe took it as an insult and tried to refuse the cheque but Rice was having none of it. After he left, Axe tasked Wags (David Costabile) with finding out who else Rice had cashed out.

Wags discovered that Rice had only cashed out Axe. As Wags got to promising all the things he would do to Rice, Axe spotted Wendy’s office. He went to see her for a chat and put the lights on. He wanted to talk about Rice and she made him realise that he’d given money but not actually been there as a mentor which is what Rice needed. Wendy made a connection with the situation to that of the one with Taylor. It helped Axe know what to do next. Before he left he said the whole company needed her with the lights on. She did a Google search on her name to find out what people were saying about her.

Axe turned up at John Rice Capital and said he understood about the money. He wanted to make up for the past and suggested a deep sea fishing trip. Rice was a little hesitant but Axe insisted and off they went. Before heading out Axe suggested they leave their phones in the car boot. It seemed that Axe might be up to something.

After enjoying the fishing and a couple of beers, it was time to head home. However, Axe’s boat refused to start. He put a call in for a tow and was told it would take many hours due to a backlog. Axe even offered up an incredible amount of cash but was told to wait it out. With no where to go, Axe confronted Rice again about the money and tried to get him to take it back.

Rice went on a personal attack against Axe and basically explained he didn’t want to be involved with him or his company. After getting the truth, it was revealed that Axe had sabotaged his own boat. He fixed the broken connection and they headed back to shore. When they turned their phones back on we found out what Axe had really been up to.

Back at the office, Axe had a room full of people including Wags and Dollar Bill making calls to ruin the reputation of Rice. The fake stories were further reinforced because people couldn’t get hold of Rice to verify. He also had an interview published where he ripped apart Rice’s strategies. This caused almost all of Rice’s investors to pull their cash, effectively ruining him and his company. This seemed a bit over the top even for Axe and I wonder if he did what he did to Rice because he hasn’t yet been able to ruin Taylor.

On his first day as Attorney General, Chuck was stopped outside by Connerty (Toby Leonard Moore). He was expecting Chuck to send him plenty of work but Chuck laughed at that suggestion. Inside Chuck found that no one was really pleased to see him and everyone pretty much ignored him. In his office found Karl Allerd (Allan Havey) and Tonelle Burton (Tijuana Ricks) who explained that the Governor Bob Sweeney (Matt Servito) had pulled all his power.

Chuck went to see Sweeny and realised that Jeffcoat (Clancy Brown) had threatened to cut funding if the Governor didn’t curb Chuck’s power. As usual, Chuck sought advice from his father (Jeffrey DeMunn) who told him to fight back. He uncovered illegal moves by some of the State Assembly and tricked them into supporting the restoration of his powers.

Chuck made his move at the funeral of Black Jack Foley (David Strathairn). He stepped up to the podium as the Governor was about to speak and had everyone involved in the illegal activity arrested there and then. Not only has he got his power back, he’s let everyone know he’s serious and to be feared.

At the end of the episode, Connerty and Sacker (Condola Rashad) were working on a strategy to go after Chuck. They uncovered a possible solution that involved some permits that Chuck Sr. had expedited to let his development plans go ahead. They were then seen covertly watching Chuck and his father talk about the development plans.

Can’t wait for the next episode? Check out our preview of Billions 4×06 Maximum Recreational Depth.