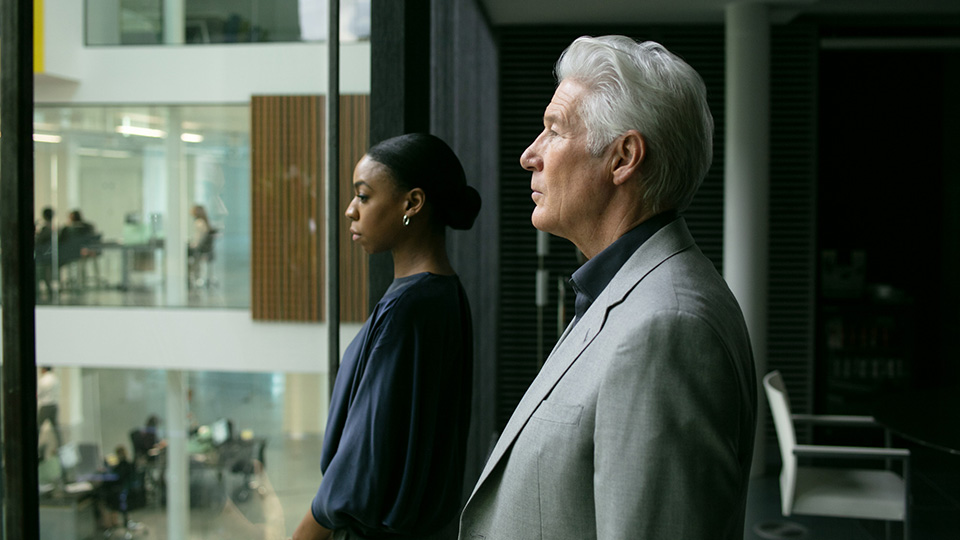 Max (Richard Gere) caused a divide in the country following the death of Jahan’s (Danny Sapani) son on the penultimate episode of MotherFatherSon.

If you don’t want any spoilers for MotherFatherSon, stop reading this article now.

As Jahan said goodbye to his son, civil unrest broke out in the country. Protests, riots and burning effigies took place but Max showed no remorse for the situation he caused. He went to see Angela (Sarah Lancashire) to find out why she’d paused her campaign and she admitted it was a mark of respect.

Max suggested that his newspaper wasn’t to blame for the murder or the situation that was occurring up and down the country. Angela shared her thoughts about how the murder would be used against her and Lauren (Pippa Bennett-Warner) tried to tell her there was no conspiracy against her. Max wanted to know if Angela was going to soften her message and she responded by saying that she wanted to fight for the 20 million poor people waiting to be heard.

Meanwhile Kathryn (Helen McCrory) went through the file that Max had compiled on Caden (Billy Howle). She realised that her son was responsible for the death of the private investigator and an argument broke out. Caden insisted that he was all of the worst parts of Max with none of his strengths.

After taking a breather, Kathryn spoke again with Caden. He asked her why she never fought for custody and she told him she regretted it. Kathryn tried to convince Caden not to confess but he refused to listen. He told her he was doing it for himself rather than to attack his father.

Maggie (Sinead Cusack) and Nick (Paul Ready) went to see the mother of Tonia, the teenager who was murdered at the beginning of the series. When they revealed that they wanted her help to expose the illegal investigation into the death of her daughter, the woman got upset and asked them to leave.

After they left Nick revealed that he and his family were relocating to Israel.

Max’s bad day continued to get worse when he had a heated row with Sofia (Elena Anaya) who threatened to leave him and raise their son on her own. She angrily told him she won’t let him break their son the way that he broke Caden.

Orla (Niamh Algar) resurfaced and Caden got her to admit that there was no investigation into her. She told him that she fell in love with a married translator who ended up getting murdered. Caden tried to reassure her that she wasn’t responsible for the man’s death and he said that he loved her.

An angry Maggie turned up at Kathryn’s house with her partner. When Kathryn didn’t answer the door, Maggie smashed a window with a stone. That got Kathryn’s attention and she let them inside the house. Maggie shared her anger over Caden not confessing to her during their interview and then she invited Kathryn to attend her wedding.

Max made it into the office late at night and wrote an inflammatory story about Angela being ‘stoned’ in her car by angry protestors. He called Lauren to the office and told her to run the story, warning her that if she doesn’t want to be in his inner circle any more than she won’t get invited back in. Max also made it clear that he’ll push back against Caden if his son does confess.

The next day Max discreetly attended Angela’s latest rally and as she got a rousing reaction from the crowd, he actually started to look a little bit concerned about person he was throwing his weight behind. He then visited Kathryn’s mother for help but he didn’t’ get what he wanted.

Caden tracked down the family of the translator that was murdered and brought them to the military rehab centre to meet Orla. As soon as they entered the room, Orla embraced the woman and broke down in tears.

Kathryn enlisted Scott (Joseph Mawle) to go to Maggie’s wedding with her. As the ceremony took place, Sofia returned home to live with her mother and admitted that she would only take Max back if he agreed to change.

At the evening celebration, Kathryn was introduced to Nick’s wife and she had a brief exchange with Maggie. As she threw confetti over the married couple, Kathryn spotted Lauren waiting down the street for her. She went to speak to her and was asked to go and see Max.

Kathryn arrived at Max’s office and he offered her the chance to take over the paper and get it back on the right track. Pushing her for an answer, Max was left angry when Kathryn refused his offer and told him she’d walk away and watch him burn.

The final episode of MotherFatherSon airs at 9pm Wednesday on BBC Two.