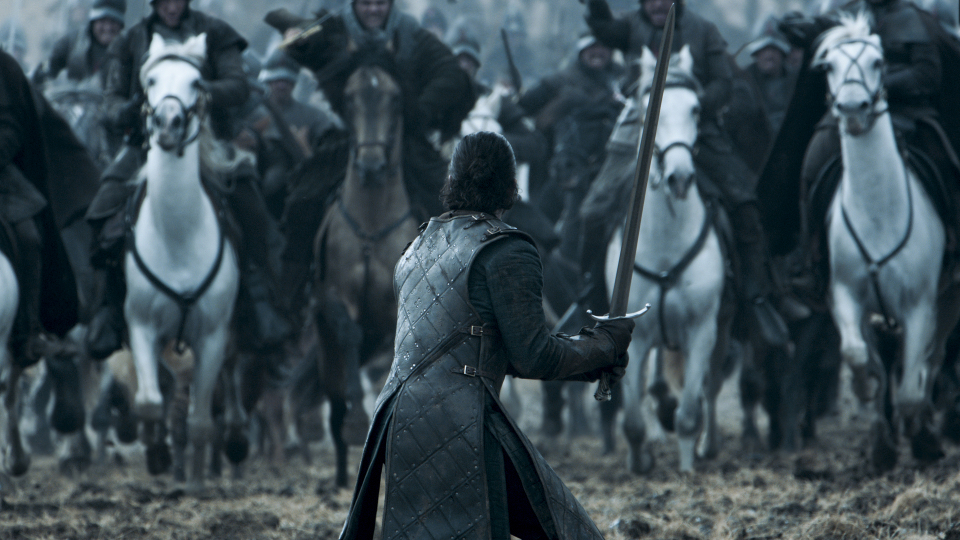 There’s just a few hours left until the eighth and final season of Game of Thrones gets underway. I thought I’d pass the time by picking my top 15 most epic Game of Thrones scenes from the first seven seasons.

Choosing the scenes to include in this list was much harder than I first thought it would be. Nearly all of the 67 episodes so far has some epic moments so choosing just 15 was tough.

After much deliberation, you’ll find my final picks below. I’m confident that all Game of Thrones fans will agree with some of these choices but also have their own favourites that I was unable to include.

In season 4, Tyrion Lannister (Peter Dinklage) was put on trial for the assassination of King Joffrey Baratheon (Jack Gleeson). In Children, the season 4 finale, Tyrion managed to escape execution thanks to his brother Jaime Lannister (Nikolaj Coster-Waldau) setting him free. Instead of fleeing right away, he went to the Tower of the Hand and found his former lover, Shae (Sibel Kekilli), in his father Tywin’s (Charles Dance) bed. After being betrayed by her at his trial this was too much for Tyrion and he strangled her to death in a fit of rage.

Tyrion then grabbed a crossbow and went in search of his father. He found him sat on the privy and here he confronted him. Tywin thought he had nothing to fear from his dwarf son but Tyrion was angered further when his father called Shae a whore. He warned his father not to say it again but his father wasn’t one to be told what to do. After calling Shae a whore for a second time, Tyrion fired two bolts into his father’s chest, ending his life.

Back in season 1, episode 6, this one was a tough watch for the squeamish. In Vaes Dothrak, Daenerys Targaryen (Emilia Clarke) took part in a Dothraki pregnancy ceremony with the Dosh Khaleen. Her part involved eating an entire raw heart of a stallion. It was no easy task but she nommed it down, impressing her husband Khal Drogo.

Never afraid to shock, Game of Thrones took everyone by surprise in the season 5 finale when Jon Snow (Kit Harington) was stabbed and left for dead by the Night’s Watch. The season ended with his lying on the ground bleeding out.

Like most fans we couldn’t believe it was the end for Jon Snow, despite Harington and HBO confirming his death. In season 6 episode 2, we were proved right when Red Priestess Melisandre (Carice van Houten) worked her magic and resurrected our favourite bastard.

I’m not sure I’ve ever hated a character in anything as much as I hated Joffrey. He was absolutely vile and responsible for everything from abuse to death. He seemed to go out of his way to spread misery and I took great delight in the thought of seeing him eventually die.

His death finally came in season 4 episode 2. After the wedding of Joffrey and Margaery (Natalie Dormer), he took much amusement in humiliting his uncle Tyrion. After drinking wine that he demanded Tyrion bring to him, he started to choke and died a gruesome death. Tyrion was arrested for the crime but it was the fantastic Olenna Tyrell (Diana Rigg) who was behind the murder.

Sean Bean tends to die in most things he stars in but with Ned Stark seemingly one of the most important characters in Game of Thrones season 1 his death left us traumatised. Game of Thrones kept its promise that no one was safe when Ned lost his head, in front of his daughters Sansa (Sophie Turner) and Arya (Maisie Williams), at the order of Joffrey. Even Cersei (Lena Headey) had requested that he be sent to Castle Black to serve the Night’s Watch rather than be executed.

In revenge for killing many of her family, including mother Catelyn (Michelle Fairley) and brother Robb (Richard Madden), Arya had Walder Frey (David Bradley) on her kill list. She got close enough to slit his throat in the season 6 finale, using her new assassination skills she learnt from the Faceless Men.

In the season 7 premiere, Arya took her revenge one step further. She wore the face of Walder Frey and gave a speech to House Frey. After proposing a toast, she killed the whole lot of them with poisoned wine.

Throughout the seasons, Dany’s dragons grew bigger and bigger. They became so large that they were thought too dangerous and uncontrollable. In season 5 episode 9, Dany was placed in danger by the Sons of Harpy when they attacked the Great Games in Meereen.

Outnumbered, things looked bad for the Mother of Dragons, until her biggest dragon Drogon turned up to save her. Drogon landed in the area and made short work of her enemies. In a truly epic moment, this is also when Dany climbed upon his back and rode him for the first time as Drogon flew her to safety.

Hodor (Kristian Nairn) was one of my favourite characters on the show, despite only being able to say the word ‘Hodor’. He was tasked early on with looking after Bran Stark (Isaac Hempstead Wright) and proceeded to carry him around.

Season 6 episode 5 revealed a heartbreaking truth about the gentle giant. While trying to escape the Night King, Bran warged into Hodor while also continuing to visit the past. In the present he used Hodor to close a door and then hold it to keep the army of wights trapped while he and Meera (Ellie Kendrick) fled. Meera’s screams of “Hold the Door” could be heard by Bran who warged into a young Hodor in the past. This caused young Hodor to have a seizure while shouting “Hold the Door”. The damage left him only able to say “Hodor”.

7. Ramsay goes to the Dogs

The bastard Ramsay Bolton (Iwan Rheon) was second only to Joffrey as my most hated character on Game of Thrones. He was another who took great delight in murder, rape and humiliation. His treatment of Sansa was abhorrent and he almost completely destroyed Theon (Alfie Allen) after torturing and castrating him then turning him into his pet Reek.

Ramsay thought he was too clever and it looked like Jon Snow had met his match at the Battle of the Bastards in season 6 episode 9. After an epic battle it was Jon who was victorious and Sansa finally had her revenge on her husband. She fed Ramsay to his own dogs which tore him apart. I couldn’t help but join Sansa with a smile as she walked away.

In season 5 episode 8, Jon Snow journeyed to Hardhome with Tormund Giantsbane (Kistofer Hivju) and the Wildlings. They went to discuss with the elders a plan to move them south of the wall.

Here they were attacked by the Night King and his army of White Walkers and wights. This was our first proper look at the danger posed to those south of the wall. Jon found himself in an epic battle with a White Walker and discovered that Longclaw, his Valyrian Steel sword, was capable of shattering White Walkers.

The few survivors managed to flee by boat as the Night King watched silently from the dock. Most terrifying was when he simply raised his arms and the bodies of the dead all rose to join the ranks of his army. Eek!

Episode 9 of season 3 is still talked about to this day and remains one of the most shocking TV scenes of all time. It focused on the wedding of Edmure Tully (Tobias Menzies) and Roslin Frey (Alexandra Dowling) before a massacre at their wedding feast.

Anyone who watched the episode will remember the music The Rains of Castamere played by the band before Walder Frey had Robb, Talisa (Oona Chaplin), Catelyn and their thousands of soldiers murdered.

4. The Mountain vs The Viper

After Tyrion tried to escape execution by requesting a trial of combat, he found he would be up against the seemingly unstoppable Mountain (Hafþór Júlíus Björnsson). Tyrion managed to convince Oberyn Martell (Pedro Pascal), aka the Red Viper, to fight in his place.

Oberyn sought revenge against the Mountain for the rape and death of his older sister Elia. Oberyn was super confident in his fighting skills and knew his speed was no match for the Mountain. His confidence was his downfall and instead of killing the Mountain quickly he took his time to taunt him and make him suffer. It looked like Oberyn would come out on top but the fight ended with the Mountain grabbing him and crushing his head with his bare hands. It remains one of the most gruesome deaths in the show so far.

3. Battle of the Bastards

I already touched on this scene above in number 7 – Ramsay goes to the Dogs. However, as epic scenes go, the Battle of the Bastards is currently the most epic battle in the show. This is expected to be surpassed in season 8 with the Battle of Winterfell.

The battle featured the forces of Jon Snow going up against those of Ramsay Bolton. It features plenty of epic scenes, in particular the one of Jon Snow facing down the entire Bolton army. Things looked bad for Jon until the Knights of the Vale turned up and turned the tide in his favour.

Season 6 started to hint that there was more to Jon Snow’s parents than we or he knew. Eager fans had plenty of theories about what was going on and there was much speculation that Jon might actually be a Targaryen.

This was finally confirmed in the season 6 finale in a flashback to the Tower of Joy. We learned that Jon’s real parents were Rhaegar Targaryen and Lyanna Stark. This information should have a big impact when Jon presumably finds out the truth in season 8.

My top pick for the most epic Game of Thrones scene came in the season 7 finale. The Army of the Dead appeared at Eastwatch where the Wall meets the sea. Joining them was the Night King riding his new Ice Dragon after killing and resurrecting Viserion in the previous episode.

The Night King used undead Viserion’s breath to destroy a huge portion of the Wall. The episode ended as the Army of the Dead began to make their way south.

EF Television will be bringing you full recaps, previews and more from Game of Thrones season 8 so check back often. In the meantime, let us know your hopes and predictions for season 8 via our Twitter and Facebook pages. Remember to give us a Follow or a Like while you’re there!