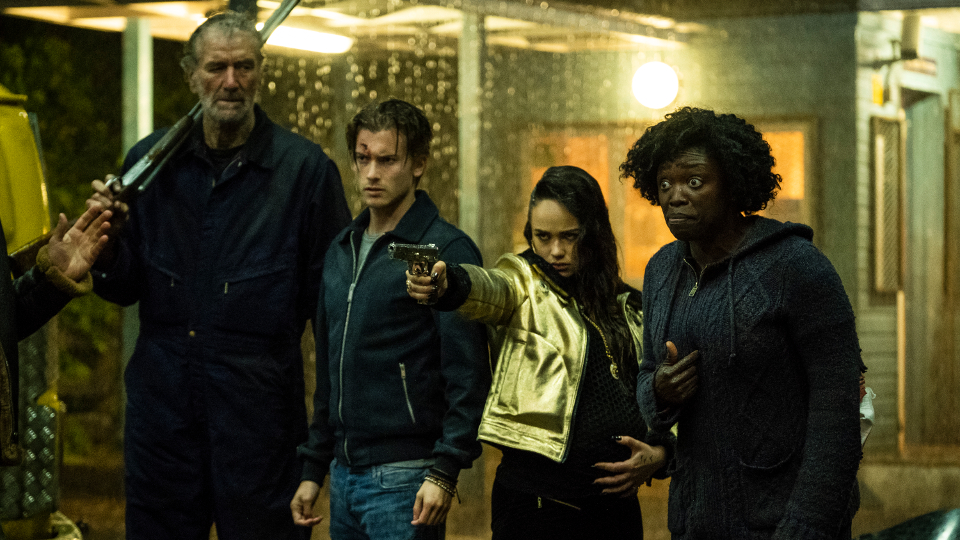 On the season finale of Curfew, the race entered its final stage and the winning team was crowned.

If you’re not up to date with Curfew and like to avoid spoilers we suggest you don’t read any further.

The season finale opened up at the petrol station from the end of the last episode. The owner Mac (Clive Russell) was outside with his shotgun when it started raining heavily. Leading the race was the mysterious biker (Adam Isdale) and he was first to arrive. After parking up and removing his helmet, Mac asked if he’d like the tank filling up. The biker asked if there was any food and Mac said he could throw something together. Mac offered a full Scottish or continental breakfast and the bike opted for a vegetarian Scottish with extra beans. When asked about how he wanted his eggs, the biker made a call to his boss who requested fried eggs.

A short while later, the BMW i8 arrived and it was revealed that Max Larssen (Adam Brody) was the driver. Mac recognised him as the guy who owned the island and Larssen asked for his fried eggs sunny side up.

Following up in third place was Faith (Rose Williams) with Cheese (Guz Khan) still driving. He also pulled into the petrol station and asked for a full tank while he popped inside for snacks. He saw Larssen and thought he looked familiar, maybe a guy from a holiday advert or something. Faith realised they were now in first place and came inside with a wad of cash to pay to try and hurry Cheese up. Larssen said she couldn’t go and pointed out that her waters had broken.

Cheese put out a call for help with delivering the baby. It was picked up by Team Donohue in fourth place but Meg (Jessye Romeo) suggested they keep going. Roman (Ike Bennett) agreed but Jenny (Andi Osho) thought they should help and Zane (Elijah Rowen) agreed. As they pulled into the petrol station, Faith told Cheese to do whatever was necessary to make sure they left first. Cheese tried to fill the Volvo up with Irn Bru but Meg pulled a gun on him.

Before the situation was resolved, Team Awesome also arrived and El Capitano (Jason Thorpe) offered himself in Cheese’s place. Joker Jones (Billy Zane) said firing a gun was much harder than it looks. Faith came out with her gun drawn and Jenny tried to talk Meg to stand down. Mac came out with his shotgun and said if anyone fired it would attract the Mooks.

Queens of Stone arrived and Lou (Miranda Richardson) told Meg off for pointing a gun at a pregnant woman. Hanmei (Thaddea Graham) had her rifle drawn in case anyone started shooting. El Capitano suddenly burped after downing the Irn Bru and everyone started firing. Meg shot Lou, Hanmei shot Zane, Faith shot Meg and Jenny was hit in the face with shrapnel. Meg died instantly and Mac called for everyone to get inside because Mooks were coming.

Inside, Jenny held her dead daughter and spoke of the first time she held her. Outside, Hanmei sped off with Lou, the biker was grabbed by a Mook and Zane tried to run off for help. He flagged down Kaye (Phoebe Fox) and Michael (Malachi Kirby) in MED VAC 239 but collapsed and died after they stopped. The made their way to the petrol station and saw the aftermath of what had gone on.

This was then the scene from the end of last episode, Michael let Brutus out of the Volvo and he ran to the café. Roman called out to Michael then Mac appeared and shot an incoming Mook. Inside, Larssen welcomed them to the party and Kaye went straight over to try and help Faith. Everyone else wondered why Larssen was there and Joker was upset that Larssen had taken part. Larssen explained that he realised he needed to bring survivors to the island and invented the race to do just that.

Mooks surrounded the café and Roman worried how they’d get out. Cheese had an idea and they sent El Capitano out in his chicken suit. He ran off and the Mooks chased him. Larssen commented on how fast he was and Joker said in the chicken suit he’s invincible. Larssen said he could feel that Joker wanted to win but he replied that he was only taking part for the shits and giggles.

Mac wanted everyone out but Kaye wanted to stay with Faith to deliver the baby. Faith had other ideas and took Kaye and Michael at gunpoint to the ambulance. Kaye thought there was a significant risk of complications with the birth but Faith was set on winning.

Mac offered to bury Meg behind the petrol station with his wife to allow Team Donohue to keep racing. They agreed and he escorted them back outside. Joker and Cheese also left as El Capitano arrived back on the scene. Joker said they had a race to win.

As the sun came up, Larssen also departed. Meanwhile, his team arrived by helicopter to set up the finish line.

In last place, Team Awesome began to jettison weight to give their camper van a much needed speed boost. They soon caught up and passed Team Donohue and MED VAN 239. Queens of Stone still had quite the lead but Hanmei was distracted and their car left the road. Team Awesome soon sped past but Hanmei flagged Team Donohue down and they picked her up, leaving Lou behind.

Hanmei looked in the file compiled by Simon (Adrian Lester) and it revealed a secret button hidden in the gear stick. They decided to push it and it gave them and incredible burst of speed. They soon caught up and passed MED VAC 239 who then pulled over to deliver Faith’s baby. At the finish line, they saw Team Awesome in the lead closely followed by Team Donohue. Roman was struggling to pass on the narrow road but cut the final corner and won.

Larssen arrived to congratulate them as Team Awesome clapped. Roman introduced Hanmei as his adopted sister Meg. Jenny asked if the island was real and Larssen assured her that it was and that he would take her there.

Larssen went round handing out complimentary boxes for entry into next year’s race. Joker suggested he stick it up his butt to the delight of El Capitano and Cheese. Larssen said he knew how Joker felt and Joker punched him to the ground.

After delivering Faith’s baby, Kaye and Michael decided they would head back to Kiloran to try and synthesise an antidote to the virus. Before they could Faith pulled her gun on them again and said they weren’t done yet. She had them drive her to the finish line where she gave her baby up to Jenny so she could take him to the island.

Before getting on Larssen’s helicopter, Roman gave Michael and Kaye a USB stick with the data he stole from the BrookHeath server. Jenny introduced the baby to Larssen as Simon.

Elsewhere in the episode, at BrookHeath, having been bitten by Helen Newman (Harriet Walter), the infection began to take hold of Grieves (Robert Glenister). He commited suicide by jumping off the roof and bounced off a curfew terminal as he landed and died.

At the end of the episode, as the helicopter flew off to the island, the competitors all burst into dance. Kaye and Michael drove off to Kiloran