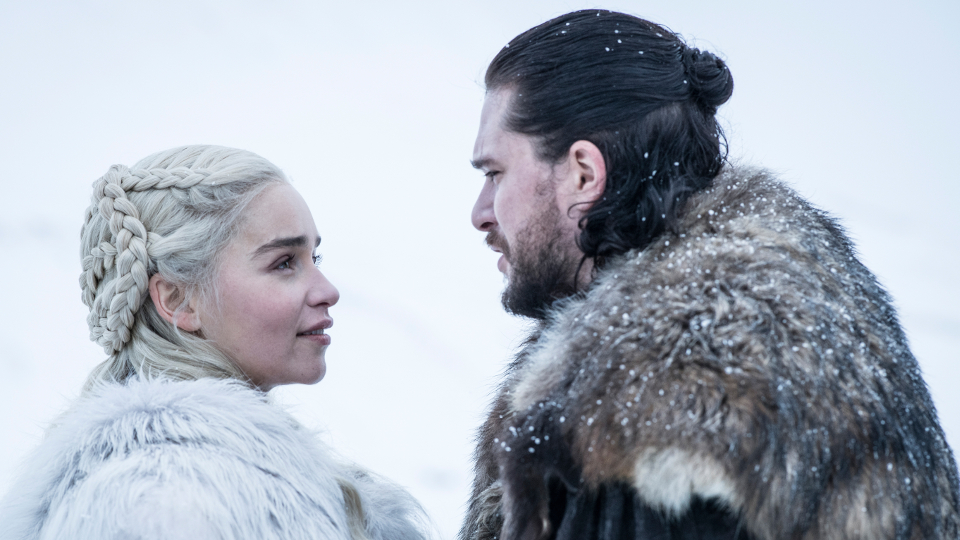 Winter is finally here as Game of Thrones returns to our screens tonight for its eighth and final season. Ahead of the season premiere I thought I’d refresh your memory on the end of season 7 and throw in a few predictions for the season 8 opener. Earlier I also picked my 15 most epic Game of Thrones scenes so far.

The end of season 7 saw the big players, including Jon Snow (Kit Harington), Daenerys (Emilia Clarke), Cersei (Lena Headey), Jaime (Nikolaj Coster-Waldau) and Tyrion (Peter Dinklage) all attend a meeting at the Dragonpit. The aim was to broke at least a temporary truce while they attempted to deal with the incoming threat from the North.

Jon had previously led a group beyond the wall to capture a wight. They brought the wight with them to prove to Cersei that the threat they spoke of was real and she agreed to the truce. She later revealed to Jaime she had no intention of helping Winterfell and it would be treason if he still went. However, Jaime called her bluff and left anyway because he had promised to fight.

After the meet, Jon and Dany sailed back to White Harbour together and had lots of sex to pass the time. Should be interesting to see how their relationship develops once Jon knows that she’s really his aunt!

At Winterfell, Littlefinger (Aiden Gillan) continued to manipulate Sansa (Sophie Turner) and tried to convince her that Arya (Maisie Williams) was there to kill her. The Stark sisters saw through his games and Arya slit his throat.

Sam (John Bradley) and Gilly (Hannah Murray) arrived and Sam had a conversation with creepy Bran (Isaac Hempstead Wright) about Jon Snow’s real parents. Bran discovered that Jon’s real name was Aegon Targaryen and that he was the true heir to the Iron Throne.

At the end of the season finale, the Night King and his Army of the Dead led an assault on the Wall at Eastwatch. His new Ice Dragon made short work of the wall and his army began marching south. It looked like Tormund (Kristofer Hivju) and Beric (Richard Dormer) might have escaped in time.

Due to the secrecy surrounding season 8 little is actually known about what happens. HBO haven’t even released titles yet for the final 6 episodes. We do know that the Game of Thrones season 8 premiere is directed by David Nutter and written by Dave Hill. Also as previously announced, the premiere will run for 54 minutes.

Read our thoughts on the season 8 trailer.

It would appear from the trailer and first-look images that much of the first episode will be about reunions as Jon and Dany arrive at Winterfell. If this happens, Jon will finally be reunited with Arya and Bran. It’s about time Jon found out who he really is so I’m hoping this is dealt with in the premiere.

Once Jon finds out, will he confess this new information to Dany or keep it secret? The trailer suggests that they might keep their relationship going and I’d bet money on there being a romantic dragon ride in there as well. A bit of happiness before everything turns messy?

Other things I’d expect to be on the way include preparations for battle and Jaime arriving at Winterfell. Will he and Brienne (Gwendoline Christie) finally get it on? What about poor Tormund? Speaking of Tormund, he and Beric did survive so will they now make their way to Castle Black to rally the remaining Night’s Watch?

Down in King’s Landing, it looks like Cersei is fast running out of friends. I expect she’s likely to sit and wait of news from the North before making her next move.

Read our Game of Thrones 8×01 Winterfell recap full for details on the episode.

View the first images from Game of Thrones season 8 in our gallery:

EF Television will be bringing you a full recap of the season 8 premiere after it airs. In the meantime, let us know your hopes and predictions for season 8 via our Twitter and Facebook pages. Remember to give us a Follow or a Like while you’re there!