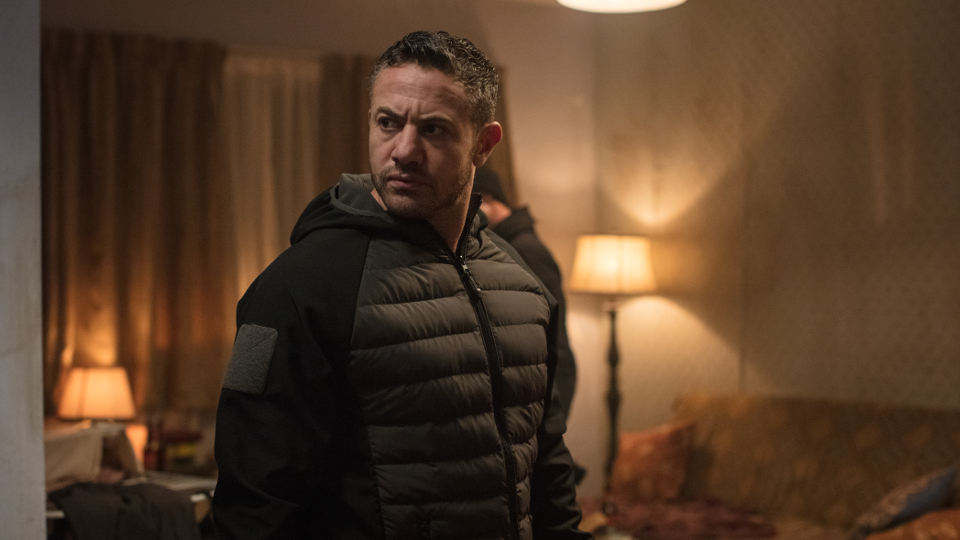 At the end of last episode, Wyatt (Dan MacPherson) was betrayed by Pavel who shot him and stole the suitcase nukes.

This episode opened up with Wyatt drinking in a bar. It soon became clear that this was a flashback to the time he met his wife Madison (Kelly B. Jones) for the first time. Things soon turned out to not be what they seemed as Wyatt realised something was wrong. He began bleeding out and then awoke in the hospital. It had all been a dream due to the trauma from the gunshot wound that he sustained.

He found Novin (Alin Sumarwata) and Mac (Warren Brown) by his bedside and was informed that he’d nearly died. Novin asked him if Zarkova was in on Pavel’s plan but he said he was shot and kicked out of the truck before he could ask. After drinking a glass of water he leapt of of bed with some urgency and declared he was off to stop Pavel from using the nukes. Meanwhile, Pavel and Zarkova arrived at a shopping mall with a suitcase nuke.

In Jakarta, Indonesia, Pavel stopped to make a phone call to Russia to access some funds. He was told his access had been revoked due to killing Beshnov. A cousin of Beshnov’s who worked at the ministry was upset at the killing and had demanded an investigation. He got confirmation that his operation was still to go ahead but that he now needed to raise the funds he needed himself. He was also told to clean house when he was done, presumably meaning that he would have to kill Zarkova.

At a Section 20 safehouse on the Myanmar-Thai border, Wyatt arrived with the team to ask Chetri (Varada Sethu) if she knew how to find Pavel. She said she wasn’t even sure that they knew who he was as his military records couldn’t be verified and she could only find information on him within the past three years. Using data from MI6 she’d uncovered that Pavel had trained at an FSB camp with a man named Roman Lesnitsky (Barry Aird) who had recently been trying to defect.

Pavel and Zarkova made it to a safehouse. Zarkova wanted to know what his phone call was about but he refused to say and said she just needed to follow orders. She pulled a knife on him and held it to his throat to test him, knowing that the man she knew as Pavel would be helpless against her. He fought back and overpowered her, leaving her winded on the floor. He gave her a choice, leave and he’d let her go or stay and he’d tell her everything but that there would be no way back. She chose to stay.

Coltrane (Jamie Bamber) made a call to Whitehall to try and get an op sanctioned to extract Lesnitsky from Russia. The appeared to turn him down but he didn’t tell the team that and said they’d need to be in and out in 24 hours without being discovered. He decided that he would go along with Mac and Novin. Wyatt told to stay behind with Chetri to recover.

Zarkova asked Pavel for his real name but he said he wouldn’t talk in Russian until after the were out of the country. They prepared to raid a jewellery store and Pavel told Zarkova to move fast and hard like in Alpha training. They worse gas masks and used some kind of smoke grenades to knock out the staff while they smashed cabinets and grabbed the jewellery. One staff member entered from the back with a gun and Zarkova shot him in the throat. He managed to activate the alarm which close metal shutters on the shop. As Zarkova grabbed the rest of the jewellery, Pavel used some kind of plasma cutter to make them a way out and they got away before the police arrived.

In Saratov, Russia, Coltrane led the team to try and grab Lesnitsky with Wyatt and Chetri on comms. Wyatt asked her about her first kill from last episode and she revealed that it was stopping her sleeping. The team made their way towards Lesnitsky’s apartment and found the door open. After they entered, Lesnitsky appeared and pulled a shotgun on them. Coltrane said they were there to extract him. Novin distracted him with her Russian and Mac grabbed the gun from him.

He said he wanted to defect because of Kingfisher and revealed that it wasn’t a person but a project that he designed. He explained that it was a covert response to the sanctions placed on Russia for what they did to Crimea and Ukraine. When asked about Pavel he said he was the man tasked with carrying out the project. He also said that he was terrified of him and that they knew too much.

Before they moved out he wanted the cigarettes that he’d asked for on the phone. Coltrane said they hadn’t contacted him by phone and they realised they needed to move fast. As they moved out the entire area was plunged into darkness as the power was turned off. Special forces with night vision turned up and Mac took one out. He gave the night vision goggles to Novin who directed his fire. Coltrane also took one out by breaking his neck. Novin grabbed a radio and heard that more were on their way.

Chetri managed to bring the power back online and the team took out more soldiers. Lesnitsky grabbed a gun and pointed it at the team. He was worried that going with them would see the Russians keep looking for him forever. He told Coltrane the name Hassan Ahmed who was the final piece of the Kingfisher puzzle. Lesnitsky left and the team moved out.

24 hours later, back in Jakarta, Indonesia, the team were back together and Chetri briefed them on what she’d found out about Hassan. He’d spent 10 years in prison for his part in a bombing campaign but was now out. Since his release he’d turned to gardening, or flowers and shit as Mac so eloquently put it. Coltrane wanted them to get to Hassan before Pavel did. Mac, Novin and Wyatt headed out.

Meanwhile, Pavel and Zarkova met with Hassan. Pavel was nervous because they were two days late and had jewellery instead of cash as agreed for payment. They were told that Hassan was not happy and he said he rejected their deal. Zarkova and Pavel made a speech together and changed his mind.

Novin, Mac and Wyatt arrived on scene. After Novin was about to be discovered, Mac had no choice but to start firing. They then began an assault on the compound. Zarkova laid down suppressive fire but was careful not to shoot any of 20 while Hassan escaped. Pavel had Wyatt at gunpoint and the pair decided to settle things with melee combat. Wyatt said he could kick Pavel’s ass but found himself taking one hell of a beating due to not being fully recovered. In the end local military arrived and arrested both sides.

Back at base, Coltrane and Chetri argued. She realised that Coltrane had taken the team rogue and didn’t have permission for their operations. He revealed that 20 had been effectively closed down after Myanmar. Chetri said she had a responsibility to report it in. Coltrane asked that she keep tracking Hassan as he was going off solo to try and recover the team. She did as he asked and decided to go after Hassan alone.

The Indonesian military Colonel Aldo (Naeim Ghalili) came to speak to both sides. Wyatt told them who Pavel and Zarkova were and they were taken away. Mac offered to share their intel on Hassan, who the Colonel was already tracking. The Colonel gave an order and Novin’s face dropped. Mac thought they were off to processing but Novin said they were being taken away for execution.

They had two armed guards with them in the van. Wyatt managed to cut himself free while Novin tried to distract the guards. Mac grabbed a gun and then spotted a can approaching fast to ram them. It was Coltrane and he apologised after his team were free. He wanted Wyatt and Novin to go help Chetri while Mac went with him. He confessed that he’d taken the team off books when they suddenly came under attack. Mac grabbed a grenade and jumped in the van that Coltrane had just rammed. He drove at speed towards the attacks, wedged the accelerator down with a gun, left a primed grenade on the dashboard and jumped out. After the van rammed the attackers it exploded, killing them all.

Chetri reported in that she had eyes on Hassan at the mall. Comms became interrupted and she saw that Hassan had the suitcase nuke. She said she would take a shot at Hassan but she was grabbed from behind and the episode ended.

Can’t wait for the next episode? Read our Strike Back: Silent War episode 8 preview.