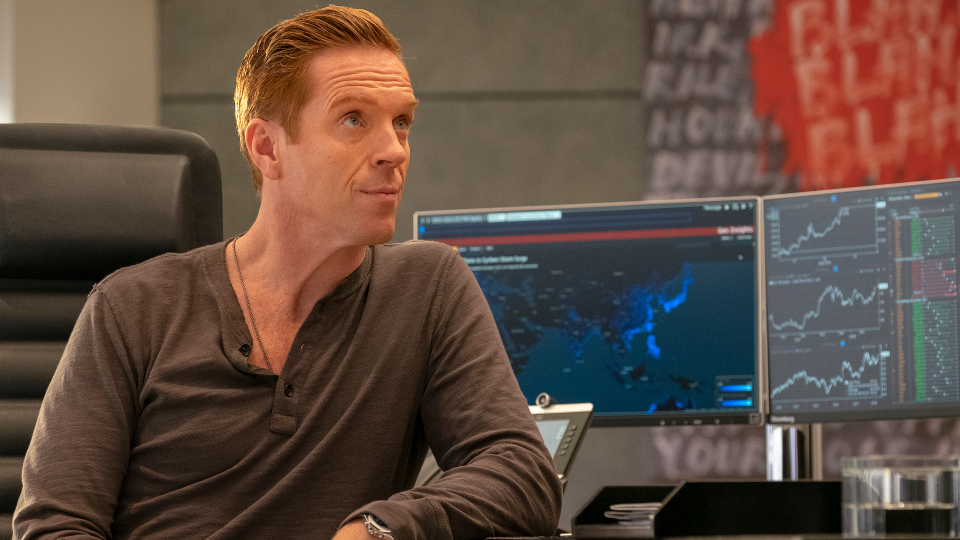 On the third episode of Billions season four, Axe (Damian Lewis) had to step in when a tip from Dollar Bill (Kelly AuCoin) went south quickly.

The episode opened up with a large chap (Danny L. Chapman) driving a motorised scooter through a chicken farm. It didn’t make a lot of sense but we’ll get to it shortly.

At Axe Capital, Axe continued his quest to destroy Taylor (Asia Kate Dillion). A meeting was being held with Axe, Wendy (Maggie Siff), Wags (David Costabile) and Hall (Terry Kinney). Hall informed them that internal surveillance on Taylor Mason Capital hadn’t been possible. It wasn’t all bad news but he had found a way to hack their remote logins and download their positions and trading patterns. He handed Axe a USB drive with the information. Wendy suggested the information was useful because they could drive the prices up and chip away at Taylor’s profits.

Axe gave the USB drive to Ben Kim (Daniel K. Isaac) and set him to work. The office was disturbed by Dollar Bill singing and he had a tip involving the Arkansas chicken index. He had information that ‘The Chicken Man’ (the man from the start of the episode), who was supposed to provide counts of chickens, was reporting low numbers of the birds. Instead of counting them he was getting the information direct from the farms. They purposely provide low numbers to keep prices high and Bill reckoned that this information could be used to make a lot of money. When Axe asked his level of certainty, Bill said he was “Not uncertain”.

The office was buzzing waiting for the chicken index report to land but it was delayed. Bill decided to head to Arkansas himself to find out why. At the Chicken Man’s house there was no answer and looking through the window Bill saw that he had died. Axe suggested buying his replacement off but instead of a single person, they installed an entire team which made that idea impossible.

His solution was to steal an infected chicken from a quarantine farm. His plan was to use it to infect all the healthy chickens. Realising what he was planning, Axe and Wags went and stopped him. Axe said he’d just have to take the loss and couldn’t risk people dying by poisoning the food supply. A lesson learned from Ice Juice.

At Taylor Mason Capital, Taylor held a meeting with Mafee (Dan Soder) and Winston (Will Roland). Mafee said it was obvious that they were being front-runned. They knew that it must be Axe who was trying to disrupt them. They spoke to Sara (Samantha Mathis) who asked if they should involve Andolov (John Malkovich). They decided to leave him out of it and Sara she said she would get Cook (Glenn Davis), their IT guy, to make sure their systems were secure.

Taylor had a visitor from their father, Douglas (Kevin Pollak). Mafee gave him a tour of their offices. Douglas still referred to Taylor using female pronouns which upset them. One thing they did have in common was a love for mathematics and together they got to work on a derivative to combat Axe.

With the infrastructure at Taylor Mason Capital now secure, Hall had to find a new way to find out what they were up to. He installed an Israeli spy camera outside their office. It was capable of seeing through privacy glass and took pictures of the derivative that Taylor and Douglas created.

Chuck (Paul Giamatti) spent the entire episode suffering from a migraine that just wouldn’t go away, no matter what he tried. His father (Jeffrey DeMunn) wanted him to attend a fundraising gala at his casino where Michael Bolton would be playing to help his Attorney General chances.

Chuck had a meeting with Lonnie (Malachi Weir) who informed him that an article was due to be published. It was about an old case about a company called Sugar Vape. They were aiming their marketing at kids for their products with were harmful. Chuck previously had the opportunity to prosecute them but didn’t think they would win the case. Lonnie explained that the CEO had links to his father.

Chuck had a meeting with Lucien Porter (Matthew Lawler) but he refused to kill the story. Chuck next met with whistleblower Ray Cruz (James Martinez) and told him that he shielded him from Sugar Vape. He said if the story got out that they would sue him so Chuck helped talk him down.

Lucien confronted Connerty (Toby Leonard Moore) about Cruz rescinding his statement which killed the article. He said that is must have been a bogus story which Connerty denied. Sacker (Condola Rashad) said she could undo whatever Chuck had done. She met with Cruz and changed his mind by promising him compensation.

Chuck attended the fundraiser and put an elastic band around his leg. By pulling it he could inflict pain on himself, which he found pleasurable, and he used it to keep himself motivated. He campaigned hard but Wendy noticed that people were distancing themselves from him.

On the way back from Arkansas, Axe reviewed the derivative that Hall’s spy cam had captured. He spotted a mistake and knowing that Taylor never makes mistakes it meant they knew that Axe was watching. Axe saw it as a peace offering and met with Taylor. They proposed a cease fire so they could focus on their own things. Taylor suggested Axe invest in Taylor Mason Capital which would make Axe Capital look dominant. Axe agreed but when back with Wags he said it was “Time to set up the next part”.

At the end of the episode, Chuck met with Axe and they had a drink toasting their new friendship. Unusually for Chuck he asked Axe for help in winning the election. He promised that once in position he could return the favour with the power it gave him. Axe agreed and said he had his first favour in mind which he’d reveal “on the other side of the war”.

Can’t wait for the next episode? Check out our preview of Billions 4×04 Overton Window.