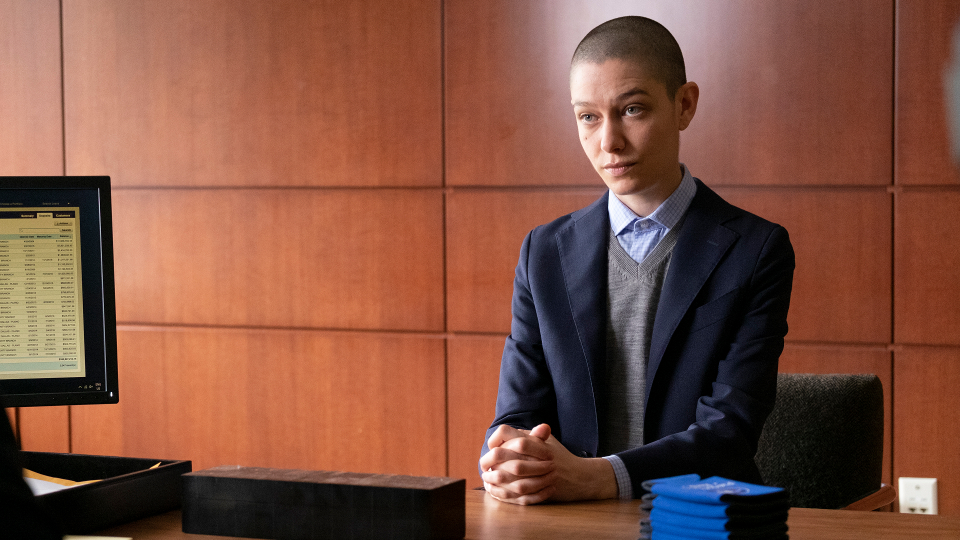 The episode opened up with robotics company pitching their latest creation. Axe and Wags (David Costabile) were among those in attendance. A woman walked in and caught the eye of Wags who explained that she was venture capitalist Rebecca Cantu (Nina Arianda). Axe watched in awe as Rebecca ripped apart their pitch.

Axe offered to invest as long as they refused to give money to Taylor for their Quant program. He also met with all the other major banks and made sure they did the same. Taylor knew Axe was behind it but didn’t know what to do about it. Wendy (Maggie Siff) told Axe he couldn’t keep throwing money away just to hurt Taylor.

Axe tasked the team with looking into Rebecca. He later had a meeting with Ben Kim (Daniel K. Isaac) and Tuk (Dhruv Maheshwari) about a company called Eureka building solutions. They were taking money back from their immigrant workers so they effectively got paid less than minimum wage. Axe decided to take them on so that a company of Rebecca’s would benefit. He decided they would get Tuk employed with Eureka to get the evidence they needed. Tuk got the job and managed to get the boss on film asking for money back from the wages.

Axe went for dinner with Rebecca to talk business. She talked about her businesses and he said he wanted in on her cleaning company. The pair got on like a house on fire and ended up going home together to have sex.

Andolov (John Malkovich) turned up to see Taylor and said he could get the money they needed from his friends the Kozlov brothers. Andolov basically gave them no choice but to agree. Taylor had her team look into the Kozlov’s and they found out they were more dangerous than Andolov. Taylor was concerned that agreeing would give Andolov more power than them.

Taylor decided to take the offer but find a way for the Kozlov’s to back out. This involved leaking the information that the Kozlov’s were going to invest in Taylor Mason Capital. This information got back to Axe and still hellbent on destroying Taylor he had the squeeze put on the Kozlov’s. The whole thing turned out to be a test by Andolov who was impressed. Taylor requested Andolov help get them back in favour with the banks and he agreed.

Meanwhile, Chuck (Paul Giamatti) was tasked by the Commissioner (Michael Rispoli), who got him the concealed carry permit, to look into the police pension fund. In particular, he wanted Chuck to focus on Raul Gomez (Ruben Santiago-Hudson).

Chuck uncovered links between Gomez and Axe so decided to speak to his new friend before proceeding. Axe doesn’t want Gomez removed so instead proposed Chuck go after Michael Panay (Hari Dhillon) the man who ran the pension fund for Gomez.

Chuck put the new plan to the Commissioner said that if they had Gomez fire Panay, he expected Axe would be his replacement. This would work out better for the Commissioner in the long run. In return for his efforts, Chuck asked the Commissioner to endorse him as the next Attorney General and he agreed. Bryan Connerty (Toby Leonard Moore) later vowed to ruin his chances.

Elsewhere in the episode, Mafee (Dan Soder) went out for lunch with Rudy (Chris Carfizzi). Rudy explained he was desperate for a job to support his pregnant wife after Axe fired him. Mafee said he’d sort him out with a job at Taylor Mason Capital.

Mafee suggested hiring Rudy to Taylor and they said it was up to him. After realising he’d be responsible for Rudy, Mafee had a change of heart and had to turn him down.

That leaves Wendy who had Spyros (Stephen Kunken) come to her after reading employee emails. He found out that Bonnie (Sarah Stiles) had been approached by Mafee. Wendy spoke to Bonnie who told her that she turned them down. Their conversation turned into more of a therapy session and Bonnie realised the questions were more aimed at helping Wendy. Bonnie told her that she goes running at night to forget she wants anything at all.

At the end of the episode, Wendy took Bonnie’s advice and went for a run.

Can’t wait for the next episode? Check out our preview of Billions 4×03 Chickentown.