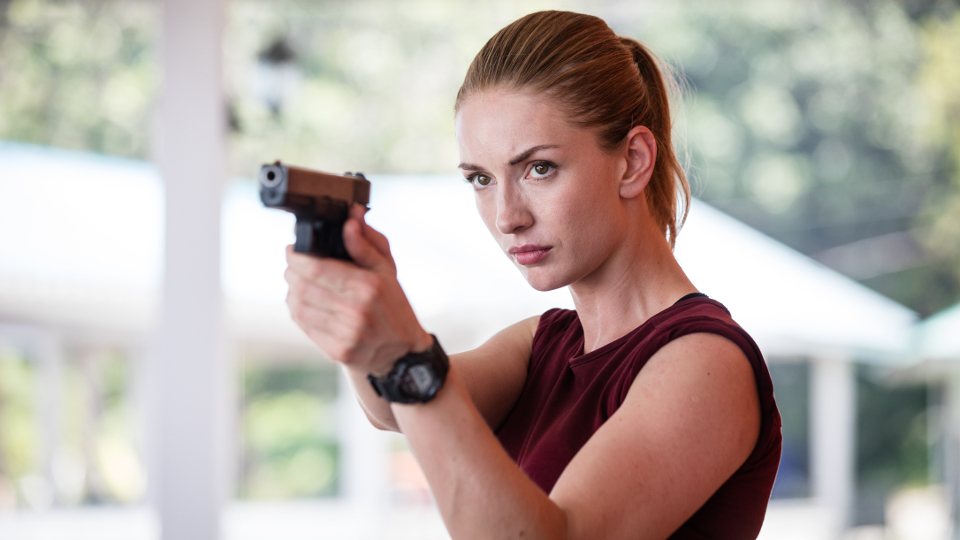 The fourth episode of Strike Back: Silent War (season 7) saw the team continuing their pursuit of the suitcase nukes.

The episode opened up where the last one left off, with Gopan (Rudi Dharmalingam) shooting Zarkova (Yasemin Allen). Coltrane (Jamie Bamber) fired shots and Gopan fired back. Coltrane and Chetri (Varada Sethu) checked Zarkova and discovered her vest took the bullet. Coltrane fired on the fuel tank of the truck that Gopan was hiding behind, it exploded but he got away. Novin (Alin Sumarwata) and Mac (Warren Brown) arrived with Connor Ryan (Aidan McCardle).

Meanwhile, Wyatt (Dan MacPherson) was being given a beating by Anjali Vartak’s (Shivani Ghai) men. She wanted to know who Samira Shah (Pallavi Sharda) was and why she’d try to shoot her. Wyatt turned the tables and pushed her about the suitcase nukes before realising that she had no idea what she was really funding.

The team arrived at an MI6 safehouse, Chetri got their IT up and running while Novin sorted out weapons. Mac wanted to go back for Wyatt but Coltrane said the mission came first. Their next order of business was finding out what Connor knew. Chetri managed to identify Gopan and pull up some background info on him.

Vartak’s men took Wyatt to a remote location to kill him. He managed to keep talking to distract them. One punched Wyatt to the ground and prepared to shoot him. Wyatt distracted him further by asking to remove his watch. In a split- second he grabbed the gun, and shot all three men. He then called the team to pick him up.

Gopan called to check on the progress of the suitcase nukes and was told they were almost ready. Vartak went to see him and explained that Section 20 had taken her lawyer. She asked if the plan remained the same and he said they were going to detonate dirty bombs in mosques around the city to irradiate the places of worship. She then came onto him as a distraction while she swiped some kind of keycard.

Mac, Wyatt and Novin went with Connor to get the intel he had on Vartak. Novin stayed downstairs to watch the lobby while the boys escorted Connor. Chetri was running comms back at base and noticed the security cameras were taken offline. Novin helped a girl who spilled coffee on her head scarf then spotted Gopan enter the lobby. Meanwhile Zarkova appealed to Coltrane that they needed to do something. Gopan gave a signal and a group of armed men stormed the building and took everyone hostage.

Connor took the boys to an office where he accessed a hidden safe. He took a large amount of cash and drugs for himself and gave them an encrypted hard drive. He promised to give up the password once he was safely on his way. As they prepared to leave, two gun men approached the office. Connor activated a security system to protect the room.

The gun men went back to the lobby and reported to Gopan. He chose five hostages at random and had them kneel. He then made a call to the office and demanded that Connor be handed over. Mac tried to talk so Gopan had one of the hostages executed. Mac asked Connor to open the shutters but he grabbed a gun instead. He threatened the boys but Mac promised he could get him out of the situation if he trusted him.

Back in the lobby, Gopan spotted the girl with the coffee stain and removed her scarf. He then aimed his pistol at her but Novin shouted and stood up. Gopan recognised her and she said he’d be better using her as leverage than killing the girl. Gopan shot the girl anyway so Novin flipped and punched him. He turned to shoot her but Mac walked into the lobby with Connor who started shouting to Gopan. He told him that Wyatt was in the building and unarmed then gave up his location. Gopan sent two gun men to get Wyatt but it was a trap and Wyatt overpowered them.

Gopan took aim but Mac began shooting. Suddenly bullets came through the windows from outside, killing more gun men. It was Zarkova who was sniping from an elevated position. Wyatt stormed the lobby and Novin got stuck in too with her hand-to-hand combat skills. Connor panicked during the chaos and decided to run, but was shot by Gopan. The team fled and were extracted by Zarkova.

Back at base the team waited while Chetri analysed the hard drive. With Connor dead they were left without the password so unable to access the information due to heavy encryption. Chetri needed some special military grade hardware in order to crack it and Zarkova said she knew where they could get it. She took the entire team to see Pavel (Alec Newman) so they could use his equipment. On the drive they found details of two properties that Vartak had recently purchased.

Meanwhile, Vartak used the stolen keycard to try and find out what was really going on. She found a lone man pouring petrol over the site where they had built the suitcase nukes. After hearing Gopan had everything moved, she shot the man in the leg, set fire to him and watched him burn alive.

Next, Vartak went to see Gopan and he showed her the suitcase nukes. She pulled a gun on him while saying he’d used her. He admitted deceiving her but showed that he had also created the promised dirty bombs. Vartak took a phone call from the press asking about her links with Gopan. She denied it but was sent an article that was due to go live that showed her with Gopan.

Mac, Novin, Wyatt and Zarkova arrived at the site by boat. Mac sent up a mini-drone that Chetri used to scout the area. Coltrane gave the go ahead so the team moved in to search for the nukes. They opted for stealth and began taking out the guards around the compound. Until Mac shot one who managed to fire off some rounds alerting Gopan and the others.

The team scrambled and fought their way through the enemy. The nukes were loaded onto a van and driven off with Gopan following in a car. Mac, Novin and Zarkova commandeered a vehicle to give pursuit. Vartak took off herself with one of the dirty bombs so Wyatt gave chase on a motorbike.

Wyatt caught up with Vartak when she crashed into some market stalls. She fled into an apartment block and he cornered her. She activated her bomb and held the dead man’s trigger. Wyatt jumped at her and the pair of them fell out the window and several floors to the ground. Somehow Wyatt managed to grab the trigger and then he deactivated the bomb when they hit the ground. He was injured but alive, while Vartak was impaled and killed.

Mac and the rest of the team led an assault on Gopan and it was Zarkova who filled him with bullets. Before he died he told her that he’d been told to spare her because the Russians were behind everything. Zarkova chose to keep that information to herself.

At the end of the episode, the truck carrying the nukes was about to go out of range. Chetri flew the drone at the windscreen and managed to grab a photograph of the driver. She ran it through facial recognition and got a match.

Can’t wait for the next episode? Read our Strike Back: Silent War episode 5 preview.