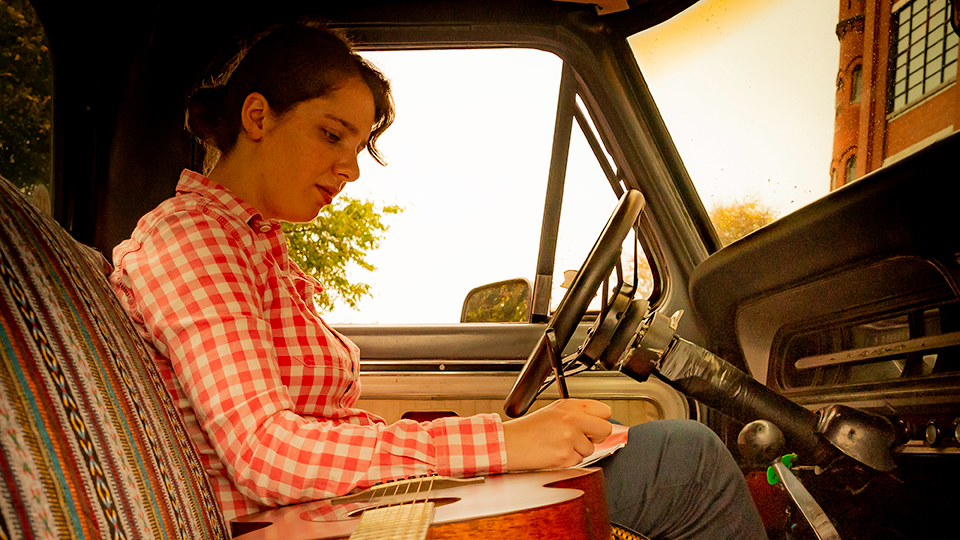 2019 is proving to be a busy year for Roseanne Reid. The daughter of Proclaimers singer Craig Reid, she’s already toured with folk legend Kathy Mattea and recorded a session for Jules Holland’s Radio 2 show. Her debut album, Trails, is due out on 5th April and last night she played her first London headline show at the intimate St Pancras Old Church.

Carrying her acoustic guitar, Reid arrived on stage shortly after 9pm to whoops and applause from the audience. She opened her set with romantic new song Girl Who Took A Chance, which balanced its light, bright melody with Reid’s bluesy, soulful vocals. I was particularly impressed with her musicianship throughout, including her use of her guitar to create rhythm and the song’s harmonica section. The whole thing had a great old-school feel to it and set the template for the rest of the evening.

Throughout the performance Reid mixed songs from her debut album with newly written material and a few cover versions, including her gospel-influenced, driving take on Justin Townes Earle’s Harlem River Blues, with an a capella finish that highlighted her vocals, and her sparse, delicate mash-up of Mountain Lullaby with Rufus Wainwright’s One Man Guy. Although initially she started off as quite soft-spoken and came off a little shy, as things went on she seemed to relax a lot more and was soon telling the audience stories about making the album, her songwriting process, family anecdotes and her relationship with her wife.

The set was a great showcase for Reid’s diverse styles and influences, running the gamut from the desolate, atmospheric What I’ve Done, with raw vocals full of despair, to the 60s-esque I Love Her So and the uptempo wistfulness of Me Oh My. It really highlighted her versatility as a musician and vocalist and gave us an insight into her range. I also thought she had great vocals throughout, with a husky tone that’s incredibly distinctive and was highlighted by her straightforward approach to performing the songs, many of which were stripped-back compared to their album versions.

One thing which consistently stood out was Reid’s skill as a songwriter. As well as the storytelling she showcased in songs like It Is You, she brilliantly captured the vivid details of a red dress in the open, affecting What Constitutes A Sin and a lingering image of stars in . I also thought she did a great job of creating characters in songs such as Amy, a bittersweet ballad which showed off both the edge in Reid’s voice and a touch of breathiness, and the touching yet frank Levi with its great turns of phrase.

There were plenty of highlights throughout Reid’s performance. Til Kingdom Come, which she wrote for her wedding, had a gorgeous lullaby-like feel and was full of warmth and affection. Meanwhile, Good Thing Going had just the right blend of knowing, desperation, futility and weariness, with Reid bringing out the song’s emotions very strongly, and Sweet Annie was full of conviction. Reid could be seen getting lost in the music as she moved around the stage during the song and it was incredibly mesmerising to watch.

Reid closed her set with two new songs, beginning with Call It Love. Its toe-tapping, sunny melody mixed beautifully with the heartfelt, honest lyrics and I liked the twang and harmonica in the song as well. She followed that with All I Need For Once, a moving song with a directness and realistic feel that made it incredibly refreshing, as well as capturing the fear and fragility of love really well. The crowd were absolutely spellbound throughout and as she finished the song they burst into huge cheers and applause.

Overall Roseanne Reid delivered a confident and assured performance which was full of charm and showed her talents as a vocalist, musician and songwriter. There’s a wonderful timeless quality about her sound and she has a real talent for getting the nuances of emotions in her songs and bringing them out through her distinctive vocals, which were full of passion and conviction throughout. Throw in her excellent guitar-playing, and you’ve got something very special. She’s got a very bright future ahead of her and I can’t wait to hear more – starting with the album.