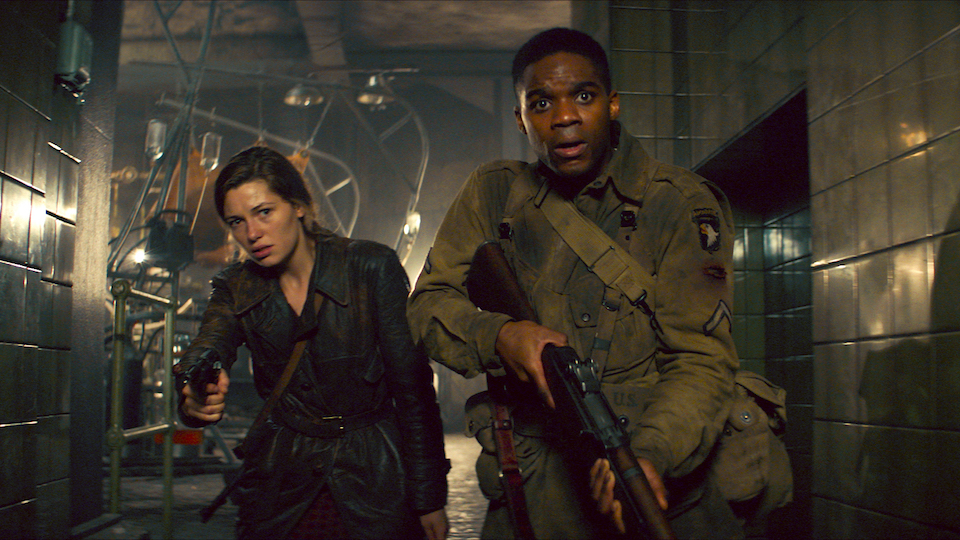 Having long been rumoured to be part of the ever-growing Cloverfield franchise, Overlord instead turned out to be just a good old-fashioned WWII men-on-a-mission movie. Unfortunately for the soldiers in question, their mission leads them right into the heart of a hideous Nazi experiment, and the film quickly shifts gear into a full-on blood-soaked horror.

From the opening sequence, director Julius Avery unleashes hell. We’re in the final hours before the D-Day landings, and a squadron of US Paratroopers including Ford (Wyatt Russell) and Boyce (Jovan Adepo) are preparing to be dropped behind enemy lines. Their mission is to destroy a German radio tower built on top of a church in a French village.

The plane carrying the soldiers comes under heavy fire, leading to a terrifically intense and visceral sequence, as the plane is torn apart by bullets and shrouded in flame. It’s a brutal opening to the film, and very neatly sets the tone for Overlord. Yes this is a war film, but war is hell. When the surviving soldiers arrive in the village, the horror intensifies when they come face to repulsive face with the creations of the evil Nazi SS Captain (Pilou Asbæk) and his team of deranged scientists.

The soldiers take refuge in a house belonging to a villager named Chloe (Mathilde Ollivier), who lives with her little brother. After such a tremendous opening, the film unfortunately grinds to a halt as we spend way too much time in this location. When Boyce discovers the true horror of what is going on in the bowels of the church they have been sent to destroy, Overlord briefly threatens to get very good again, but then we’re back in the attic of Chloe’s house, and the tension and pace just drains out of the film.

It’s a shame because the film otherwise ticks a lot of boxes. It’s stylish, it’s well shot, and it knows how to orchestrate a decent scare. It’s got Nazis, zombies, and tons of entertainingly gruesome violence. The performances are all strong, with everyone playing the material with a straight bat. Russell is excellent as the tough Ford, driven to complete the mission no matter what, and Adepo is engaging and relatable as the young private Boyce.

So you might be thinking, well I’ve seen this film before. There are lots of WWII Nazi-splatter exploitation films, and yes most of them are low-budget and nasty, and go straight to video, but there have been some bloody good ones amongst them, such as Outpost and Dead Snow. Overlord however has been given a bit of mainstream credibility by having studio backing, a big budget (relatively speaking), J.J. Abrams on board as producer, and two of Hollywood’s most exciting young talents in Russell and Adepo at the head of the cast.

This affords Overlord a sheen and quality that the otherwise scuzzy material doesn’t really deserve. But it is also the reason the film keeps holding back, when it should be letting loose. Those low-budget Nazisploitation films don’t have nervous studio execs to appease, and can therefore push the trashy grindhouse element as far as their minimal cash-flow will allow. Don’t get me wrong, Overlord has some supremely gruesome and bloody things going on, but it just keeps teetering on the side of mainstream.

The final act however, is a blast with plenty of thrills and action to keep you entertained. The biggest criticism I can land at Overlord however, is that at nearly two-hours long it kind of outstays its welcome. A little less time spent hiding in the attic, and a bit more haste in getting to the final act would have done wonders for this film.

The blu-ray release comes with one special feature – The Horrors of War, which is a 50-minute behind the scenes documentary. It is split into six separate featurettes, giving fairly comprehensive coverage of all aspects of the production of Overlord.