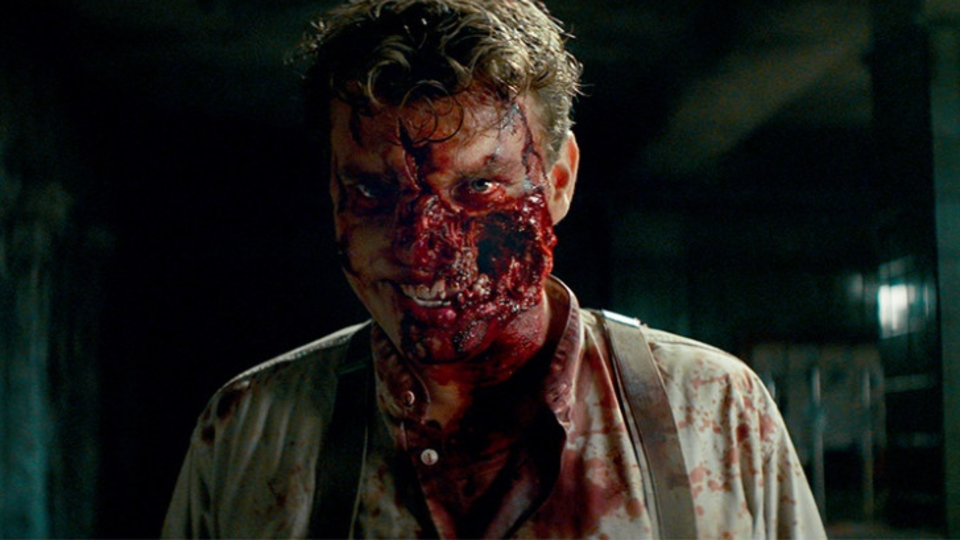 From its retro-inspired titles sequence down to its B-movie premise, there’s a lot to enjoy in director Julius Avery’s war actioner/horror hybrid Overlord. With a script from Billy Ray and Mark L. Smith, the film puts visceral horror at the forefront of its wartime fable of soldiers on a mission of grave importance, and gives us a cult movie that does all of the basics just right.

With D-Day just hours away, a group of Paratroopers are tasked with bringing down a key communications tower so the soldiers can get to the shore. But before they can execute that objective, their plane is caught in crossfire and they crash land. With only a handful of survivors, the rag-tag group encounter a local woman named Chloe (Mathilde Ollivier) who reluctantly agrees to take them in for a few hours before they can continue with the mission at hand.

Whilst hiding in her loft, a Nazi detail make their rounds with its cold-blooded leader Wafner (Pilou Asbæk) looking for anything suspicious. In the meantime, Private Boyce (Jovan Adepo), a young soldier stumbles upon a facility where Nazi’s are conducting horrific experiments on the locals. Returning to Chloe’s house, Boyce must convince his commanding officer Corporal Ford (Wyatt Russell) to add to the mission plan and destroy the facility before their monstrous creations see the light of day.

Overlord delivers a blistering and visceral thrill ride that grabs your attention right from the start. With a plot that changes pace considerably midway through, the different elements of the narrative are given due respect in a film that works on many levels. As a war movie, this could easily attract an audience, even without the horror element attached. The characters are fleshed out quite well given the pace of the film with Jovan Adepo handing in a star-making turn as Private Boyce. He is our eyes and ears in this nightmare with Adepo delivering a well-rounded character that we can all get behind and champion.

Mathilde Ollivier is really impressive as Chloe, a strong willed survivor looking to end the Nazi rule in her village. She shares a wonderful chemistry with Adepo and the two make a formidable double-act. Wyatt Russell adds some grit to the role of Corporal Ford, a loner and an explosives expert who has clearly been affected by his experiences in the war. John Magaro is on-hand for some light comic-relief as Tibbet, a paratrooper who is befriended by Chloe’s little brother, much to his dismay. And then there’s Pilou Asbæk. I’ll watch anything that man is in and he once again steals the film with a devilishly-despicable turn as Wafner, the regional head of the Nazi’s.

When the horror ramps up it really gets going, and the film has some very effective sequences which instil a sense of dread and disgust. The extent of the experiments that the Nazi’s are conducting on the locals are (cleverly) never fully revealed, but you get a good sense of what some of the side effects are. This could potentially even ignite a sequel, as there’s plenty of scope left to explore this element further. But of course, only if the box-office numbers are good enough for Overlord, and I hope they are, because it delivered a very entertaining 109mins.

With lots of tension, great characterisation in a tight timeframe, a quickening pace and some wonderfully inventive horror, Overlord is a cult hit waiting to happen. This collective cast all do a great job with the material and the suspense keeps you on your toes. An absorbing horror with real drama and heart, Overlord demonstrates the real and unreal horrors of war in a film that grabs your attention and leaves you glued to the edge of your seat throughout. The best action-horror you’ll see all year.