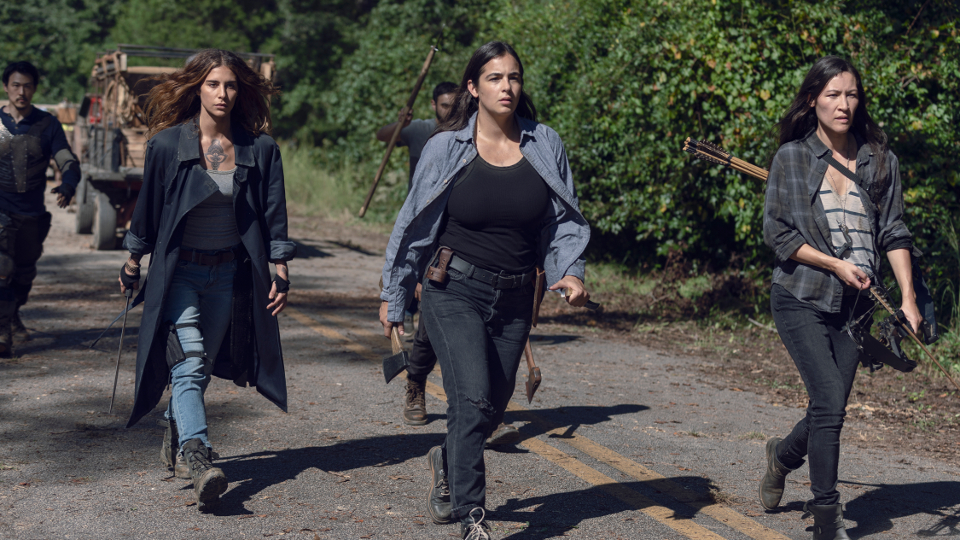 On the latest episode of The Walking Dead, Beta (Ryan Hurst) led a group of Whisperers to try and retrieve Lydia (Cassady McClincy).

Last episode, Henry (Matt Lintz) tracked down the Whisperers to try and rescue Lydia. He found himself a prisoner but he and Lydia were rescued by Daryl (Norman Reedus), Connie (Lauren Ridloff) and Dog.

Chokepoint picked up as Daryl and the gang fled the Whisperers camp leaving behind a chaotic scene. The herd they walked into the camp had left several Whisperers dead. Beta inspected one man who had been bitten and he knew that he would turn soon. He told the man that he’d always be with them and sure enough he was shown later on as a walker shambling along with the Whisperers. Beta set off with several Whisperers in pursuit of Lydia.

As Daryl’s rescue group fled, Henry fell over so they paused briefly. Daryl wasn’t keen on Lydia coming with them as he had only come to rescue Henry. However, Henry is smitten with Lydia and even suggested just the pair of them run off together. Eventually they remembered that they needed to keep moving, Daryl suggested the way to go but Connie had other ideas and ran off a different way so everyone followed.

Connie took them to a tall building and communicated that they should use it as a lookout. She showed Daryl a hidden stash of supplies that her group had left there on a previous visit. Daryl felt it was a smart idea as the barricaded stairs would help them identify Whisperers versus walkers. Connie agreed that it was a chokepoint they could use to their advantage. Daryl asked Lydia about Beta and said that they’d kill him first.

After making preparations for the arrival of the Whisperers, Henry and Lydia shared another kiss after he admitted caring for her. Daryl interrupted them and had them stationed high up to keep an eye out. Lydia spotted a group of walkers mixed with Whisperers approaching. In the center was Beta and he looked up at them. Daryl, still not trusting of Lydia, locked her in a small room with Dog to protect her.

The Whisperers soon entered the building and began making their way upwards. The plan seemed to be working as the walkers remained stuck downstairs. Henry attacked the first few that came in with his staff. One of them managed to stab him in the leg. Lydia heard his screams and managed to break out. She came to his rescue with Dog.

Daryl lay in wait for Beta with his trusty crossbow at the ready. When Beta burst through the doors, Daryl fired off an arrow. Beta was prepared and was carrying a door as a shield. Beta rushed Daryl and the pair engaged in melee combat. Beta’s huge size was too much for Daryl and he found himself thrown around the place.

The pair pulled knives and went at each other with Daryl only surviving due to his speed. Eventually unarmed, Daryl pulled a pocket knife and stuck it in Beta but it didn’t seem to bother him. Daryl managed to flee through a partition wall to the next room and Beta punched his way through. As Beta made his way across the room, it was revealed that Daryl had managed to hide in Connie’s secret space in the floor. Daryl crept out and rushed Beta from behind, knocking him down a lift shaft. Daryl gathered his group and suggested they head to Alexandria to get Henry stitched up before moving on.

Elsewhere in the episode, preparations were underway for the Kingdom’s upcoming fair. Jerry (Cooper Andrews) went to see Ezekiel (Khary Payton) and Carol (Melissa McBride). He was without his usual armour and looked to have been in a fight. He explained that he was leading a group that was attacked. He handed over a note that he had been given.

It featured the mysterious red symbol from recent episodes. The note was from a new group called The Highwaymen who had moved into the area after Carol killed Jed’s group. They said that they controlled the roads around the Kingdom and demanded payment for their use.

Ezekiel was keen to gather all their fighters to launch an assault but Carol suggested they try talking them first. During the meeting the group seemed pretty hostile and set on getting paid in supplies. Ezekiel offered them a job to look after the roads for them, in return he’d grant them access to the Kingdom and the upcoming fair. The Highwaymen’s leader Ozzy (Angus Sampson) laughed until Carol told them they had a movie theatre.

Nearby, a group from Hilltop led by Tara (Alanna Masterson) approached the Kingdom to attend the fair. They found the road blocked due to a fallen tree and were surrounded by walkers when they tried to clear it. They begin fighting back but were saved by the Highwaymen.

At the end of the episode, it was revealed that Beta survived his fall. He struggled to his feet and looked rather angry. I don’t think we’ll have to wait long for round two.

Can’t wait for the next episode? Check out our preview of The Walking Dead – 9×14 Scars.