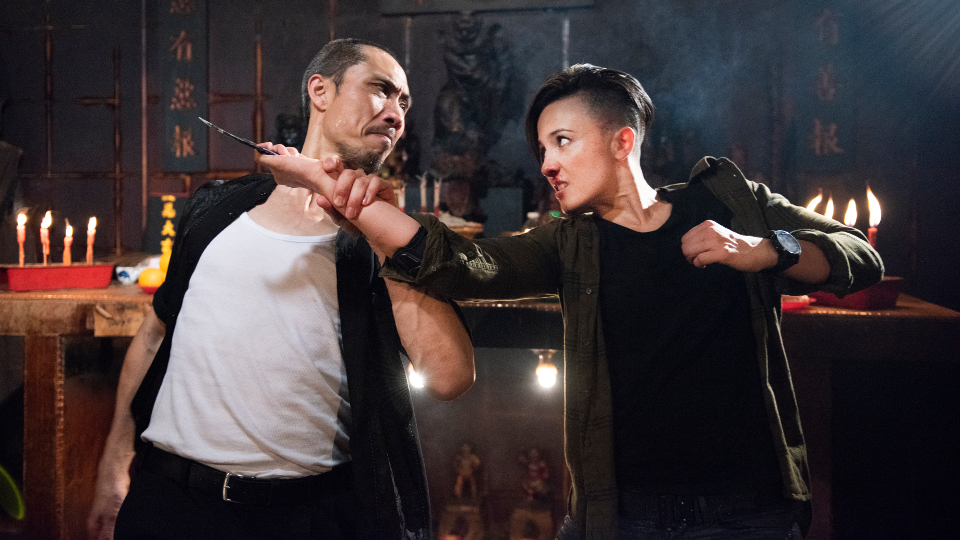 The second episode of Strike Back: Silent War (season 7) saw the team working with Zarkova (Yasemin Allen) to track down the stolen nuke.

The episode opened up at Kuala Lumpur Docks in Malaysia where the police were acting on intel about the stolen nuke. Inspector Amy Leong (Ann Truong) had allowed Section 20 to participate in the mission, with Novin (Alin Sumarwata), Wyatt (Dan MacPherson) and Mac (Warren Brown) in the field and Colonel Alexander Coltrane (Jamie Bamber) working comms remotely while High Commissioner James McKitterick (Adrian Edmondson) watched.

The intel placed the stolen nuke in a warehouse. As the team and the police surrounded the building, the Triad gang were shown loading the nuke into a crate and onto a truck. Novin passed explosive charges to Wyatt who mounted them on a door. Coltrane gave the go signal and Wyatt detonated the charges. Inside the building was shown to be empty. Back with the Triad gang an older man named Godfather Kim (Teik Leong Lim) was overseeing the loading of the nuke. He took a phone call and was told about the police operation and that he had been right to move the nuke across the city. Upset at the failed mission, the Inspector refused to let Section 20 look for the nuke. She said the city would be put on lockdown while Section 20 were suspended from any further operations on their soil.

Meanwhile, Godfather Kim was having the operations officer, who gave up the intel last episode, beaten by Laoshu (Tom Wu). Kim gave Laoshu photographs of the police and Section 20 raiding the empty warehouse and said that they were a problem. He said they needed to call in some high level assistance to prevent them interfering. He then threatened Laoshu’s family in order to get him to do his bidding.

Back at base, Coltrane questioned Zarkova and she suggested working together. She offered them access to classified Russian intelligence in exchange for their help stopping the Triads selling the nuke to Kingfisher. To carry out her plan she would need to see her handler Pavel (Alec Newman).

Novin and Wyatt went with Zarkova to the meet. Pavel wasn’t happy about the arrangement but went along with it. Wyatt took a look at the intel and found a photograph of Kim meeting with High Commissioner McKitterick (Adrian Edmondson). Novin realised that was why the murdered Davis had kept McKitterick in the dark. They took the information to Coltrane who found financial records showing the High Commissioner had six-figure gambling debts with the Triads. Coltrane tasked Mac with getting Inspector Leong to agree to help.

Coltrane took the accusation to McKitterick who initially denied any involement. After a brief argument, Coltrane told him that he was trying to help him. He knew that the Triads would need help to get the nuke out of the city. Coltrane wanted McKitterick to help but he refused in fear of his family’s safety and said he would back the decision to have Section 20 removed.

McKitterick left by vehicle and was tailed by Novin, Wyatt and Zarkova. They needed to wait for permission before they could act and hoped Mac could convince the Inspector. Mac went to see Leong and was invited inside where he found she had a huge amount of intel on Laoshu. Leong confessed to Mac that Laoshu was actually her father. This somehow led to the pair flirting and Leong handcuffing herself to Mac. It looked like it might turn into more until machete-wielding attackers burst in. Still handcuffed the pair fought together to overcome the attackers.

As Mac found the keys to release the cuffs, two cars full of armed Triads pulled up outside the building. They tried to flee but found themselves surrounded. As the Triads pulled weapons they jumped over a balcony into a pile of washing below. Still being pursued they managed to take a car and escape.

The High Commissioner went to Selangor Turf Club in Sungai Besi where there was a horse racing track that the Triads owned a majority share in. As the team followed him inside, Coltrane reminded them that they could only observe unless something went wrong or they were granted permission. Zarkova had other ideas and decided to go straight for the High Commissioner. Wyatt and Novin followed her but she managed to lose them by getting into a lift with the High Commissioner. She disarmed and knocked out the security leaving her alone with McKitterick. When the lift stopped, the doors opened to reveal Laoshu waiting so she surrendered.

Zarkova was escorted with the pair to a room. She recognised Laoshu as the man who killed Davis. She gave her location over comms in Russian and Novin translated. Laoshu searched her and found a wire so warned his gang that there may be others with her. Wyatt asked permission to engage and Coltrane decided the circumstances were exceptional enough so gave the go ahead.

Laoshu requested diplomatic clearance from McKitterick for their vehicle carrying the nuke. He tried to appeal but Laoshu reminded him of his debt and threatened his family. He promised that if he signed then his family would remain safe. He gave in and signed his permission.

Outside, Wyatt and Novin began their assault, using knives to quietly dispatch of the initial guards and then silenced pistols for their main assault. They were just in time to save Zarkova but Laoshu stabbed McKitterick before fleeing. As they tried to extract McKitterick, he complained that they had put his family in danger.

Novin was left to get herself away as Wyatt and Zarkova fought their way out with McKitterick. Wyatt told him to make a call to revoke the diplomatic clearance as Mac and Leong arrived in their stolen car. Leong ran off and came across her father Laoshu, she had him at gunpoint but he said he would make things right and she let him go. McKitterick got hold of a gun and killed himself instead of revoking the permission, thinking it was the best way to keep his family safe.

Meanwhile, the truck with the nuke was making its way freely through the police checkpoints. Coltrane got to work on tracking it. Wyatt asked Novin for a sit-rep over comms and she reported in that she had spotted Laoshu and went after him alone to get revenge for him killing Davis. Coltrane ordered her to stand down but she disobeyed.

Coltrane directed Mac, Wyatt, Zarkova and Leong to Hulu Langat Forest Reserve to secure the nuke. They found the place was swarming with Triads so Mac and Leong created a distraction for Wyatt and Zarkova. They found the nuke was about to be moved by helicopter so started taking out the Triads. One managed to attach the crate to the transport hook so Zarkova climbed aboard and fought with him as it was lifted into the air. Wyatt continued taking out the rest of the Triads until a grenade exploded. The blast knocked Zarkova off the crate and she plummeted to the ground but survived. The helicopter managed to fly off with the nuke.

Novin followed Laoshu home and confronted him. His encounter with his daughter seemed to have changed him and he said he had no argument with Novin. He just wanted to wait for Kim to return and kill him. Novin pulled her pistol but he disarmed her and the pair began to fight. Laoshu didn’t hold back and gave her a serious beating while throwing her around like a ragdoll. He tried to drown her in a sink of water but she reached a sharp object and stabbed him through the hand. After stabbing him more times in the torso she plunged the object into his neck and watched him bleed out.

At the end of the episode, Zarkova revealed that she placed a tracker on the nuke before she fell off the crate. Coltrane offered her a deal if she agreed to share the location and she agreed. Novin was expecting to be dismissed but Coltrane asked if she had completed the mission to kill those responsible for killing Davis. As the team had a drink for Davis, Zarkova called her superior and said she was just using Section 20 and hadn’t defected to the West.

Can’t wait for the next episode? Read our Strike Back: Silent War episode 3 preview.