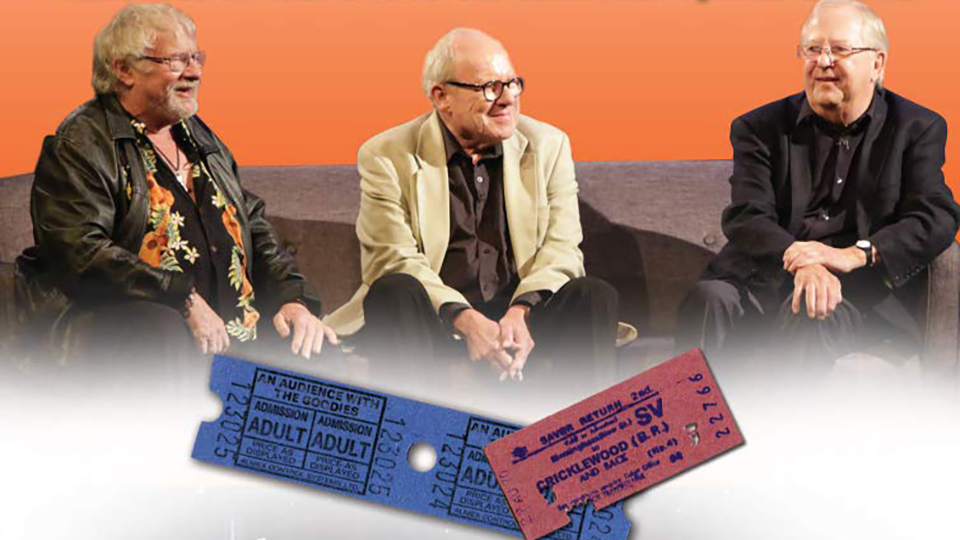 An Audience With The Goodies – DVD review

There was huge excitement last year when Network released The Goodies – The Complete BBC collection, allowing aficionados of the hilarious 1970s comedy show to relish every single original episode (well, at least until their defection to ITV in the 1980s). A special feature within the box set was part of ‘An Audience with The Goodies’ – a recently-recorded reunion in front of a live studio audience. Now, Network has released a longer version, running to 104 minutes, including part two of the show.

An Audience with The Goodies is sweet and sentimental. Unusually, nearly half a century after their heyday, all of the stars are still alive. Thus Bill Oddie, Graeme Garden and Tim Brooke-Taylor reunited to celebrate the release of the boxset and talk about their much-cherished and fondly-remembered hit series.

Comedian Stewart Lee hosts the first part of the evening, disarmingly pointing out that they all, himself included, have medically-proscribed hearing aids these days. It sets the appropriate tone for nostalgic chit chat. You really can’t go wrong with this sort of thing. On-side audiences lap it up, even where the memories are faltering or badly-recalled. What’s especially endearing is that as the show progresses, all of the Goodies start to conform to the characters they played in the show.

After the break (the section that is released for the first time) Dick Fiddy takes over as the host, which is a moderated q&a with the audience. There are some great questions, and the stars are up for the challenge. The best, perhaps, is saved for last, when comedy writer Barry Cryer pops up to ask them for their favourite joke, and follows it up with a question on how they would like to die. Oddie is not best-pleased by the question, but Garden has a good response, saying he doesn’t know because he’s spoilt for choice!

If you’re a devotee of The Goodies, then An Audience with the Goodies is a must-have. It’s great that the reunion is preserved for posterity and can reach a wide audience. It also gives three great entertainers and colleagues the chance to reflect on their legacy, including on some of the controversial aspects of the show, particularly when viewed through contemporary eyes. For a warm, sentimental trip down memory lane, An Audience with the Goodies is lovely stuff. More casual viewers may just prefer to stick on an episode and have a good chortle.