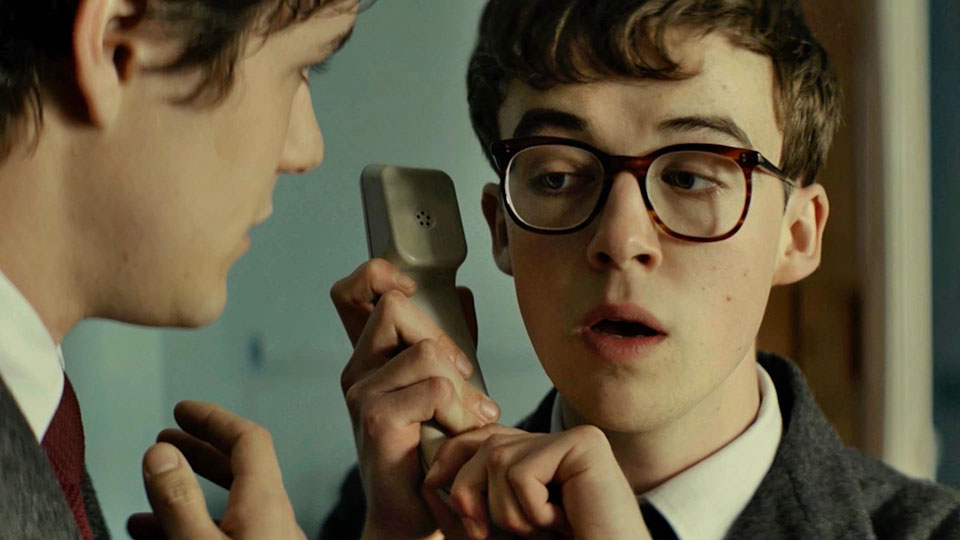 There have been several big screen variations on the “Cyrano de Bergerac” story over the years, most notably 1987 rom-com Roxanne starring Steve Martin and Daryl Hannah. This new retelling, the debut feature from BAFTA-nominated short filmmaker Toby MacDonald, is a sweet schoolboy spin with an unexpected twist in the love triangle tale that proves surprisingly appealing in its own endearingly eccentric way.

The setting is Caldermount, a super-posh all boys English boarding school that is scarily arcane, even in its 1980s setting. Tradition is king, the teachers are unnecessarily bullish, and a Darwinianesque bully-or be-bullied mentality is encouraged. You know, the so-called good old days of Great British Banter. No better is this displayed than in the film’s dramatic opening sequence, where a brutal match of “streamers” – a grim, Frankensteinian take on rugby that neatly captures the film’s caricaturing of public school life – establishes the school’s institutional ecosystem.

It’s during this mad brawl we meet Amberson (Alex Lawther); a weedy, dithering pupil nicknamed Noodle. As you might expect, he’s at the bottom the pecking order. At the polar opposite end is Winchester (Jonah Hauer-King); a haughty, privileged, dimple-cheeked jock described by Amberson in one the film’s best lines as a “Labrador in trousers”. Lawther, best known as the star of Netflix’s “The End of the F**king World”, is brilliantly cast as the fumbling nerd. He’s also the school’s sole scholarship student and thereby runt of the litter who passively accepts brutal punishment from pupils and teachers alike. He’s often seen being woken by his peers throwing a bucket of water thrown over him and sent cross country to fill it back up again. There’s a feeling that this ritual hits close to home for MacDonald – whether the soaker or soak-ee.

It’s during this errand that Amberson meets Agnes (Pauline Etienne), the apparently cosmopolitan daughter of the school’s new French teacher (Denis Menochet). She reluctantly befriends him, he immediately fancies her – and not just because she’s probably is the first female he’s locked eyes with since his mum. He’s dejected when she falls for Winchester, mistakenly (read: foolishly) believing him to be both beautiful and cultured after catching his recital of a rote-learned extract of French. Amberson agrees to pass notes between the two in exchange for respite from daily torment, and, in lieu of any emotional depth from Winchester, pours his own feelings for Agnes into letters and painstakingly created video montages. There’s a certain nostalgic whimsy to these creations that ensure they land on the right side of besotted.

As hilarity ensues – and there are plenty of laughs here, though the reliance on slapstick comedy eventually begins to wear thin – it becomes clear that Agnes isn’t as achingly cool as she thinks, Amberson isn’t so bright and Winchester is surprisingly warm hearted. As things propel towards a wistful (if clumsily edited) finale, it’s not entirely clear who Old Boys is aimed at – Lawther will appeal to a younger demographic, but his romantic struggle will be unrecognisable to the smartphone generation. Though at 95 minutes, it’s a tight and well-paced tale of gawky teenage romance and, ultimately, letting go.

Special Q&A screenings with the director and cast will take place in key cities, details at oldboysmovie.com.