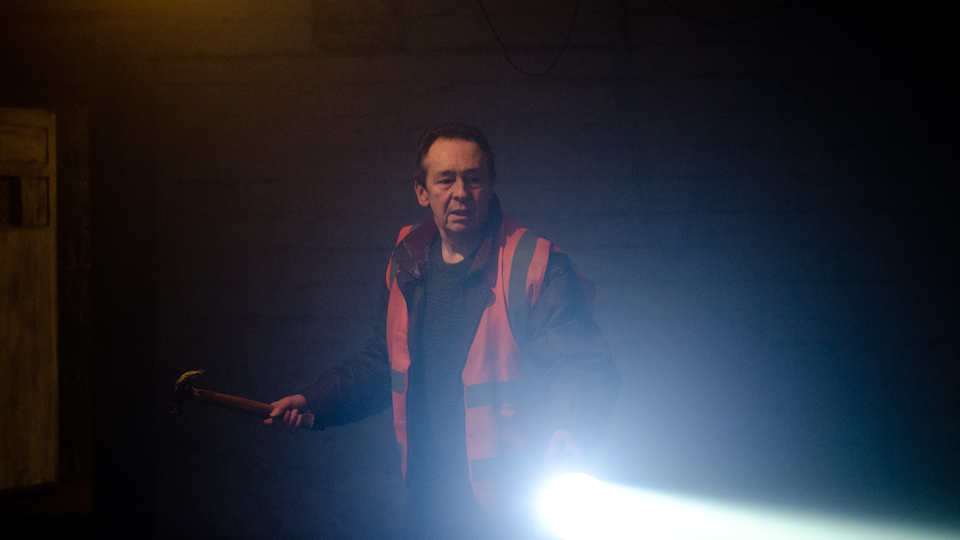 The stage-play of Ghost Stories, created by Jeremy Dyson and Andy Nyman was hugely successful, and came with a fearsome reputation for scaring the pants off unsuspecting theatregoers. They have now adapted and co-directed the film adaptation, and it arrives on Blu-ray and DVD this week, ready to terrify a whole new audience.

The plot sees Andy Nyman reprising his role from the play as Professor Phillip Goodman, a television personality and academic who has devoted his life to debunking paranormal charlatans who trap and exploit people with superstition. He is invited to meet Charles Cameron, a famous paranormal investigator from the 70s, who presents him with the three cases that he could not explain during his career. He asks Goodman to investigate them, and see if he still considers himself a rational man of science once he was seen what’s in these files.

This neatly allows the film to be structured in a portmanteau style, in what is certainly a direct homage to the cult British anthology horrors of the 60s and 70s produced by Amicus. The first case is about Tony (Paul Whitehouse), a night watchman in an abandoned asylum, who is haunted by the spirit of a former patient. In terms of pure visceral thrills, this sets a very high bar for the rest of the film. A classic haunting, playing with the most primal fears of being alone in the dark – but then something even worse – not being alone in the dark. Dyson and Nyman’s understanding of horror is unquestionable.

Every single detail is perfectly executed in order to scare you. From the framing, the composition, the timing, and the sound design, it is the pure cinematic language of terror. Added to this is Paul Whitehouse, who brilliantly conveys the sense of dread that this story instils in you. It’s an unbelievably strong opening act to a horror film, with the kind of scares that raise the goosebumps on your arms and chill you to the bone.

The second case is bit more hit and miss in its depiction of a supernatural hit and run. Goodman visits the house of Simon Rifkind (Alex Lawther), a teenager with a worrying obsession with the occult, and an even more worrying home life. He tells Goodman that he was driving his dad’s car at night, and hit some sort of demonic creature, which then proceeds to stalk Simon through the woods. There are a few more laughs in this segment, but quite a few less scares. The most effective scenes are in Simon’s house, where reality seems to be slightly off its hinges.

After a ghost and a demon, we finish up with a poltergeist. Martin Freeman plays an incredibly wealthy city financier, who is plagued by a poltergeist whilst his wife is in hospital. There are some very effective little jumps, but as the connective tissue of the overall film begins to reveal its secrets, the big scares dry up and it loses a bit of the momentum after the wild thrill ride of the first two cases. The ambition of the film takes it into unexpected and slightly unwieldy territory, but it never stops being entertaining. Even as it lurches into despair and sadness.

The film looks amazing, and Nyman and Dyson make excellent use of the locations. The derelict asylum is the stuff of pure nightmares, though I would also imagine that for people of a certain age, the working men’s pub – a kind of nicotine stained hellscape from the late 70s – where Tony meets Goodman, might bring back a few bad memories. Lovingly and stunningly crafted, featuring two great performances from Whitehouse and Lawther, and some perfectly executed jolts, Ghost Stories is well worth your time.