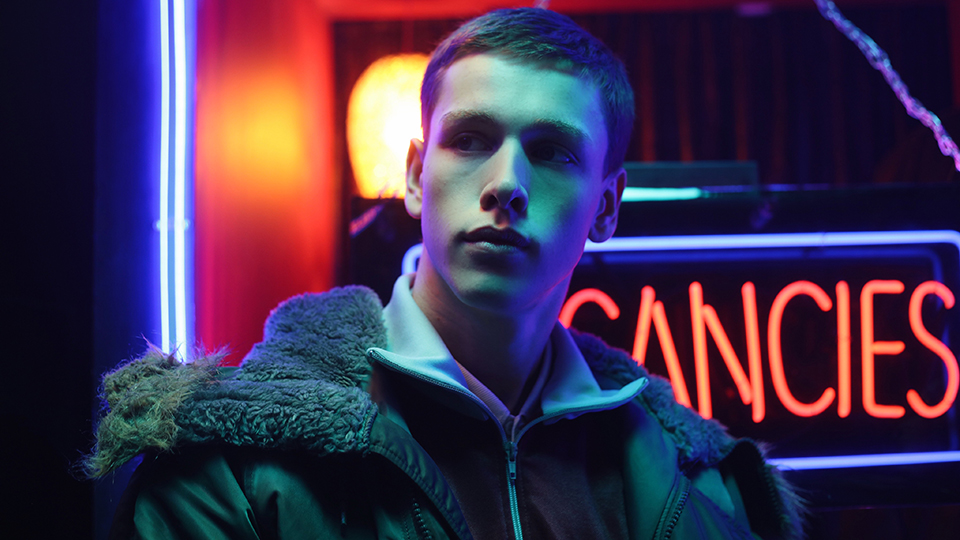 Jim (Harris Dickinson) leaves home with the hopes of finding himself in London. On arrival he’s quickly drawn into the seedy Soho scene and finds himself entering into work as a male escort, albeit with a twist. Going by the title of a raconteur, Jim is trained up to talk about art by a group of Carvaggio lovers, so he can entertain clients before sleeping with them. The only problem is that when Jim sees a piece of art work, he has a condition that renders him unconscious and temporarily puts him into the painting.

If Postcards From London sounds a little bit odd, that’s because it is. Writer/director Steve McLean’s first film since his feature film debut Postcards From America in 1994, Postcards From London creates an imaginary vision of London’s Soho bringing it to life with colourful lighting and vividly coloured sets. The film is split into four chapters with each one capturing a different part of Jim’s journey. Things start off strongly and the director McLean injects a fairly zippy pace to the plot. The characters are colourful with plenty of energy, and the whole film really pops off the screen.

Oddly where the film lacks is in the sex department. Considering Jim is a male escort and the character spends a lot of time wearing not very much, there’s very little in the way of nudity and the sex scenes happen off screen. That makes you feel a little detached from the central premise of the film and also makes it harder for you to really get under the skin of Jim. It may not bother everyone but it left me a little wanting.

Harris Dickinson is the reason to watch this film. His character Jim may be a little underwritten but he plays him in an engaging and interesting way. Dickinson picked up plenty of critical acclaim for his role in Beach Rats and he’s sure to build on that buzz here. I liked the way he balanced the more serious aspects of the film with comedy, and he’s definitely an actor to keep an eye on. His performance overshadows the rest of the cast, who aren’t helped by having very two-dimensional characters.

Postcards From London will likely be a divisive film. At times it comes off a little pretentious and it doesn’t fully capitalise on the material at hand but it’s worth watching for the performance of Dickinson and the stylistic choices of writer/director McLean. The film truly is a feast for the eyes but it could have done with a little more time on the story and script. At only 90 minutes it zips along at a nice pace but it’s unlikely to leave much of an impression on your mind other than a vision of a scantily clad Dickinson.