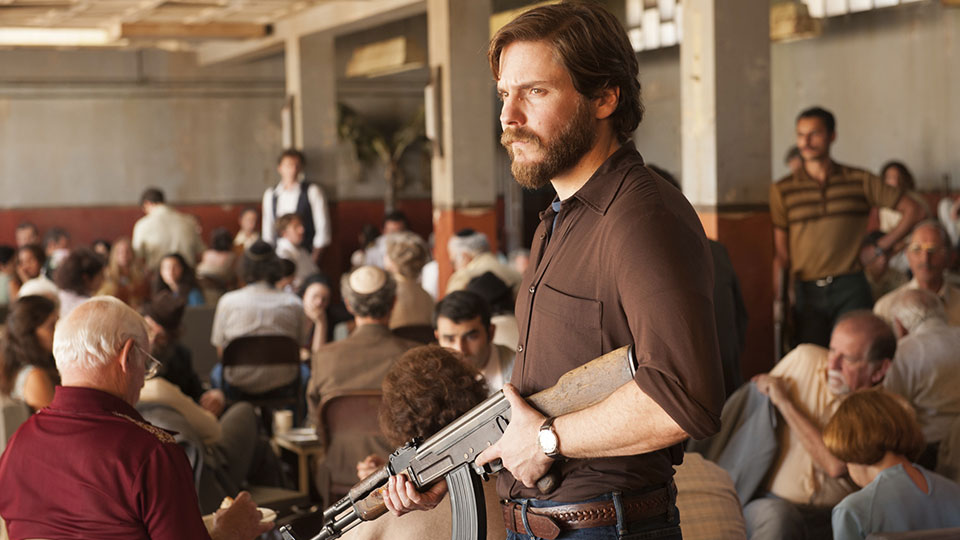 In July 1976 terrorists hijacked an Air France flight from Tel-Aviv to Paris via Athens. Forcing the plane to land in Entebbe, Uganda, the terrorists led by Brigitte Kuhlmann (Rosamund Pike) and Wilfried Böse (Daniel Brühl) separated the Jewish passengers and held them hostage so they could try to negotiate the release of terrorists held in Israeli prisons. As the terrorists up their threats, the Israeli government send in an elite commando unit to save the hostages.

Entebbe is based on true events and due to the source material you’d be forgiven for expecting a nail-biting near 2-hours. Unfortunately that isn’t what you get at all and director José Padilha (Narcos) delivers an oddly ponderous retelling of the events with an attempt to slant your sympathy towards the terrorists rather than the hostages. In fact, he’s barely interested in giving you any insight into the hostages at all so they never become more than two-dimensional characters. A case in point is when the terrorists threaten to kill two of the children if they don’t get what they want but the only reaction it evokes is a shoulder shrug because we’re never made to care about any of these characters.

The film unravels the seven days that led to the eventual standoff in Entebbe and it’s a languorous and rather dull journey. As Brigitte and Wilfried discuss ideology, occasionally slipping into German to reinforce where their characters are from, the Israeli government including Shimon Peres (Eddie Marsan) simply chat back and forth about what’s going on. Padilha fails to build any tension whatsoever and by the time the final day arrives, you’re not all that bothered. This film should have had the audience gripped and feeling like there was real danger but the terrorists, particularly Brigitte and Wilfried are painted as too nice and normal.

The cast isn’t really to fault here. Both Brühl and Pike give solid performances and Marsan is as reliable as ever. They are the only characters to get any development really and everyone else just makes up the numbers. With a cast so talented, it’s baffling how this film could have gone so wrong.

Entebbe makes a unique moment in history feel like a chore and that’s certainly not how it should have been retold. This hijacking was a huge deal at the time set against a very rocky political backdrop but you don’t really get a real sense of that from this film. Entebbe is a drawn-out and dull experience that squanders its talented cast and director.