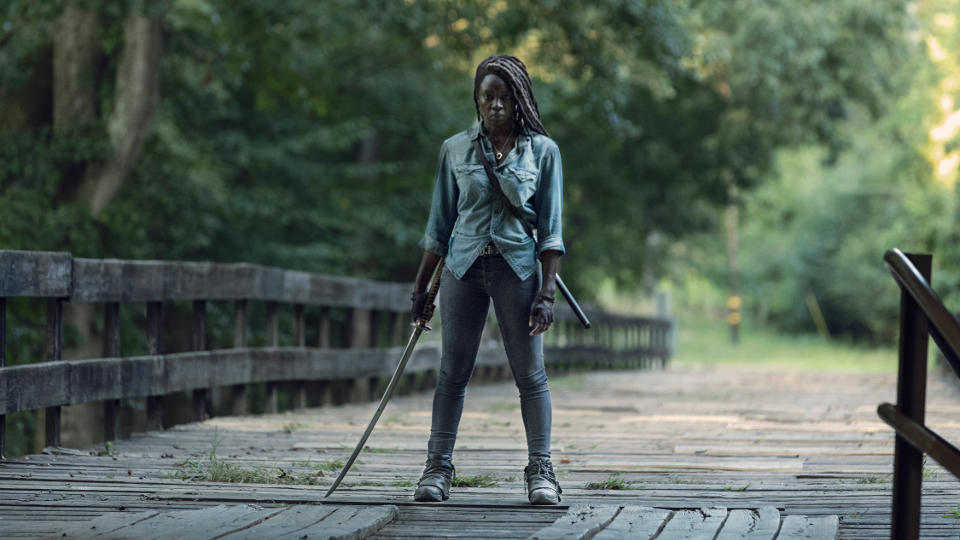 The Walking Dead returned to UK screens this week for the second half of season 9. In the episode, we found out a little more about the Whisperers, Daryl (Norman Reedus) took a prisoner and Negan (Jeffrey Dean Morgan) went on a little solo excursion.

The episode opened up with Michonne (Danai Gurira), Daryl and the rest of the survivors still trapped in the fog covered cemetery, surrounded by a mix of walkers and Whisperers. They managed to kill a few before escaping with the body of Jesus (Tom Payne). They locked the cemetery gate before they fled but the final shot showed a Whisperer unlocking it.

The group had to move slower than they’d like due to the injured Eugene (Josh McDermitt). They realised that they were still being pursued so Daryl and Michonne set an ambush. To determine which walkers were Whisperers, Daryl shot them through their legs. Those that screamed in pain were obviously human. They were left with one Whisperer alive and discovered a girl after removing her mask. Daryl decided to take her hostage.

At Alexandria, Negan was taking a look around, having walked out of his unlocked cell last episode. He managed to scrape together a few supplies including clean clothes and a shovel. He also took a compass that belonged to Judith Grimes (Cailey Fleming). As he was scaling the wall to head back to Sanctuary he was stopped by Judith. She pulled her gun on him and tried to stop him leaving. After telling him there was nothing left for him outside, she let him go but promised she’d shoot him if she saw him again.

On his way to Sanctuary, Negan killed a couple of badly decaying walkers with his shovel and took a drink from a stream that made him vomit. After ditching his shirt he stopped off at a men’s clothing store. Once inside he headed straight for the leather section and took a jacket that fit. He had to flee the store when a pack of feral dogs set about him. As he left he trapped a walker inside with the dogs.

Back home at Sanctuary, Negan found it in ruins and his people gone. He began to tidy some of it up but was distracted by a few of his Saviours who were now walkers. After killing them he smashed a wall down that was concealing a motorbike and headed off back to Alexandria. On his way he came across Judith out on her own and true to her promise she fired a shot at him. He tumbled off his bike, got told off for swearing, returned her compass and headed back with her to his jail cell.

Back at Hilltop, Alden (Callan McAuliffe) was worried that the rescue party for Eugene hadn’t returned. Luke (Dan Fogler) agreed to go with him and they set out on horses. They came across some of Yumiko’s (Eleanor Matsuura) arrows and Luke was convinced she’d left him a trail. They later came across a large herd of walkers and had to decide whether to head back home or avoid them and stay out.

While they were out looking, the group returned and the Hilltop residents were shocked to find out Jesus had been killed and that they had brought back a prisoner. Michonne and Daryl interrogated their new prisoner but weren’t convinced by her story. She tried to say that she was with a small group, that they didn’t have names and that most of them were killed. With Jesus dead the residents looked to Tara (Alanna Masterson) to lead so she stepped up. They later held a funeral for Jesus.

Michonne decided she would go back to Alexandria as they had no knowledge of the new threat. She told Daryl he needed to stay and help Tara. She also said he needed to do whatever necessary to get their prisoner to talk. Daryl went back to the girl and threatened her. She was pretty much hysterical or putting on an act. She did let slip that one of the Whisperers was her mother.

Henry (Matt Lintz), who was still locked up for his drunken antics, took issue with Daryl’s treatment of the girl. He tried to stick up for her and Daryl gave him a talking to. It seems this was all part of Daryl’s plan though because he sat listening outside the jail and heard Henry and the girl talking. She revealed that her name is Lydia (Cassady McClincy).

Elsewhere in the episode, Eugene confessed his love for Rosita (Christian Serratos). She ran outside and vomited then confirmed to Siddiq (Avi Nash) that she was pregnant. However it turns out that the father isn’t Gabriel (Seth Gilliam) but Siddiq!

At the end of the episode, Alden and Luke continued following the arrows. They noticed a walker approaching but unusually it suddenly stopped. More appeared and surrounded them, it appears the trail was a trap set by the Whisperers. One stepped forward and pulled out a shotgun, it looks like we’ve just had our first encounter with Lydia’s mother Alpha (Samantha Morton). We’ll have to wait to find out the fate of Alden and Luke.

Can’t wait for the next episode? Check out our preview of The Walking Dead – 9×10 Omega.