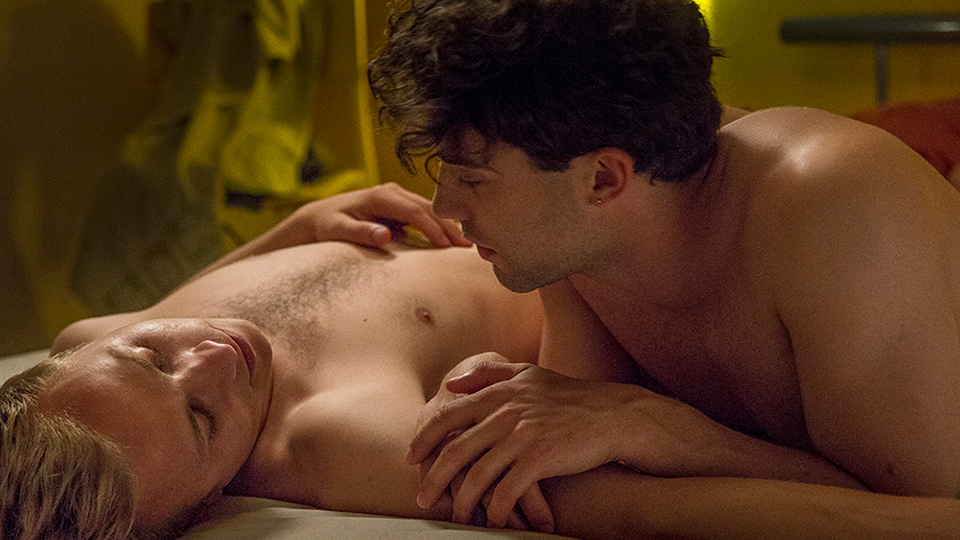 2018 was another strong year for gay film with fantastic offerings from all around the world.

As always not every film made for a gay audience found the wide release it deserved but many of them did make their way to fans via DVD and VOD releases. I’ve selected the 10 gay films released in 2018 that I loved the most. All films included in the list were given a mainstream UK release during 2018.

Keep reading to find out which films made the cut…

Obsession is the theme of psycho-sexual thriller The Year I Lost My Mind. Tom (Alexander Tsypilev) breaks into the home of professor Lars (Julien Lickert) and he can’t get him out of his mind. As Tom starts to stalk Lars, the two men are thrown into a strange cat-and-mouse game that culminates in a very unexpected way. The Year I Lost My Mind stood out for me because it’s quite bold, daring and something different. It won’tbe to everyone’s taste but if you go in with an open mind, you may just love it.

Buy The Year I Lost My Mind

This film is a marmite one – you’ll either love it or hate it. M/M is a sexy thriller set in Berlin about a Canadian called Matthew (Antoine Lahaie) who feels isolated in the city. He meets Mattias (Nicolas Maxim Endlicher) and becomes infatuated, going so far as to styling himself to look like him and even trying to pass himself off as the object of his affection. As reality and fiction blur, an accident gives Matthew an unusual opportunity. M/M by Drew Lint will definitely not be for everyone but I really liked it. It’s sexy, thought-provoking and at times quite challenging.

The long-awaited sequel to 2010’s You Should Meet My Son! Arrived at the end of 2018 and it was worth the wait. Writer/director Keith Hartman. Continues the story of Brian (Tyler Richmeier) and Chase (Emory Duncan) as they prepare to get married and have to deal with the arrival of Chase’s battle-axe mother, who wants to break them up. The cast may be different but the film is every bit as entertaining and enjoyable as the original. It’s funny, pretty sweet and has a superb cast.

Buy You Should Meet My Son! 2

Threesomes are something that many couples desire but once they venture into them, it can have disastrous results. Long-term couple Pepijn (Wieger Windhorst) and Sjors (Kevin Hassing) hit an unexpected hurdle when Sjors invites student Cas (Felix Meyer) to sleep on their couch. The couple start to push the boundaries of their relationship and when they cross a line with Cas, they have to deal with the fallout of their actions. Cas is actually a short but it’s so good, I wanted to include it in this list.

Gotham star Cory Michael Smith is sublime in this black-and-white film set against the AIDS crisis. He plays Adrian Lester, a young man who has been living in New York and is dying from AIDS. Returning home to see his family one last time, Adrian is upset to discover that his younger brother is being treated poorly by their father, who suspects he might be gay. Adrian hasn’t come out to his family but in order to help his brother, he needs to be honest about his own situation. Yen Tan’s film is moving, beautifully shot and incredibly engaging.

Unfairly compared to Love, Simon Netflix’s Alex Strangelove is a little gem of a film that deserves more attention than it received. Daniel Doheny plays the titular character who is thrown when he develops feelings for an openly gay boy from his school. As he tries to ignore his feelings and move his relationship with his girlfriend to the next level, Alex can’t get his new friend out of his mind. The film has a satisfying resolution and is sure to be of help to young people coming to terms with their sexuality.

On his stag do Will (Pip Brignall) is tied to a lamppost naked in the streets of Berlin by his friends. He’s found by the handsome Michael (Jo Weil), who helps free him and takes him back to his apartment. The two-hander sees the men have sex before entering a push-pull dynamic as they open up about their lives. The added complication is that Will is engaged to a woman… Sodom could work easily as a play and it’s bolstered by the fantastic performances from Brignall and Weil. They have so much chemistry that it’s impossible not to be mesmerised by them.

With homophobia in football still a big issue, Marcel Gisler’s Mario tackled the issue head on. Centring around two promising young footballers who fall for one another, Mario explores the pressures and hurdles that gay men have in the football profession. With standout performances from Max Hubacher and Aaron Altaras, Mario is an excellent film that draws you in and will make you feel plenty of emotion.

A breakthrough role for lead actor Harris Dickinson, Beach Rats is a gritty Brooklyn-set drama that tells the story of Frankie (Dickinson). While maintaining a relationship with his girlfriend (Madeline Weinstein) and hanging out with his friends, Frankie secretly chats to and hooks up with older men online. Film maker Eliza Hittman perfectly captures the struggle of being in the closet, which makes Beach Rats an intriguing but often uncomfortable watch.

Based on the book Simon vs. the Homo Sapiens Agenda, Love, Simon was a bit of a milestone for LGBT cinema. The film was the first teen movie by a major studio to feature a gay lead character and it really struck a chord with audiences. Directed by Greg Berlanti, the film features a stunning performance from Nick Robinson as Simon Spier, a boy coming to terms with his sexuality while being blackmailed by a classmate who has stumbled upon his emails with a mysterious potential suitor. It’s funny, heart-breaking and refreshing and I absolutely loved it.

You can keep up-to-date on all the latest gay movie reviews in our dedicated section.

In this article:1985, Alex Strangelove, Beach Rats, Cas, Love Simon, M/M, Mario, Sodom, The Year I Lost My Mind, You Should Meet My Son! 2