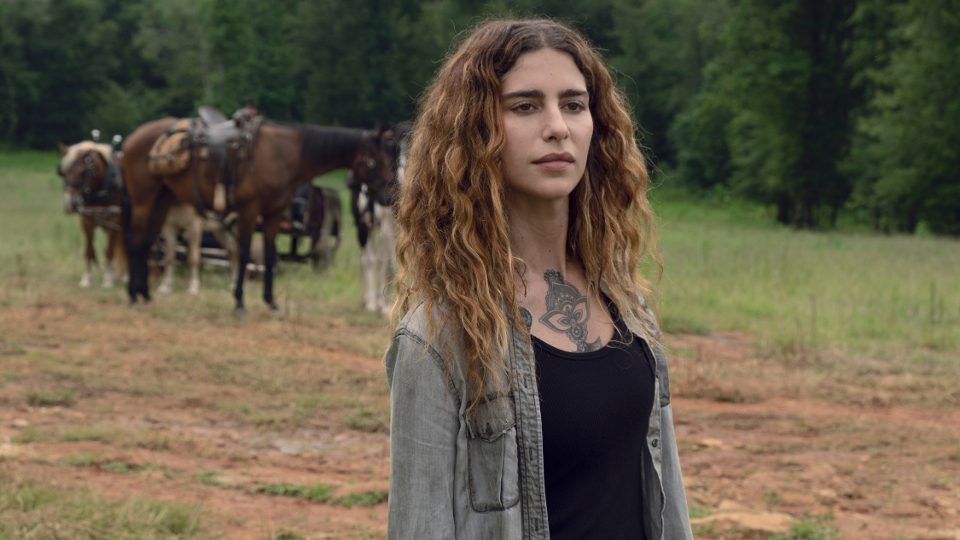 In the latest episode of The Walking Dead, the new group of survivors made the perilous trek to Hilltop.

The episode opened up with Rosita (Christian Serratos) being pursued still by the Whisperers. She’d left the injured Eugene (Josh McDermitt) in a barn somewhere while she tried to get help. She was in pretty bad shape herself and collapsed.

Meanwhile, Carol (Melissa McBride) and Henry (Matt Lintz) paid a visit to Daryl’s (Norman Reedus) new woodland camp. He lives out there alone now apart from a dog he’s adopted and given the imaginative name of Dog. It looks like Daryl’s been busy too as his camp is surrounded by all manner of nasty traps to slow down any approaching walkers. He also has animal traps set and caught a snake for their evening meal.

Daryl explained that he’s never stopped looking for Rick as they never found a body. Carol explained to Daryl that she was taking Henry to learn Blacksmithing at Hilltop. She wanted Daryl to go with them so he could stay and keep an eye on Henry. As you can probably guess he wasn’t keen on the idea.

During the night Daryl went out to find Dog who had gone missing. Henry invited himself along to Daryl’s annoyance. They found Dog tangled in one of the traps surrounded by walkers. Daryl jumped in to save him and almost got overwhelmed. Henry jumped in and saved Daryl and it was revealed that Carol was watching with her bow ready. Did she setup the whole thing? If she did her plan worked as Daryl agreed to go with them.

At Hilltop, the community was thriving and Jesus (Tom Payne) was now in charge, having being recently re-elected. Tara (Alanna Masterson) seems to be his number two and taking things a lot more seriously. Jesus had been sneaking out of Hilltop whenever he could to meet up with Aaron (Ross Marquand). They were working on improving relations between their communities and Jesus was also teaching Aaron martial arts. During their latest meet they spotted a flare which led them to Rosita.

On the road, Michonne (Danai Gurira) DJ (Matt Mangum) and Siddiq (Avi Nash) accompanied Magna (Nadia Hilker), Luke (Dan Fogler), Connie (Lauren Ridloff), Kelly (Angel Theory) and Yumiko (Eleanor Matsuura) on the way to Hilltop. Michonne revealed she had no plans to go the entire way as it seems she had fallen out with Maggie. Magna wanted their weapons back but Michonne refused.

They stopped off on the way at the old camp of the new group. When they got their they found it had been destroyed by a herd of walkers. Luke rescued a bunch of instruments that he’d been collecting. During the night Michonne confronted him and ended up slicing a Stradivarius in half that he was holding.

The next day, Siddiq revealed to Michonne that she didn’t need to worry about Maggie because she had left Hilltop to go and help Georgie and that Jesus was now in charge. As they got ready to leave a large group of walkers appeared. Michonne allowed the group to have their weapons back and together they took out the walkers. One was wearing a bright shirt and they realised it was their old friend Bernie. Magna was distraught as Michonne put him down.

Back on the road they came across two riders from Hilltop. They gave them the news about Rosita and Michonne told them to ride on to update Alexandria. In the woods Connie thought she saw something. It seems that someone might be spying on them, presumably the Whisperers?

At the end of the episode, Jesus led a small group, including Aaron, Daryl and Dog to go and find Eugene.

Can’t wait for the next episode? Check out our preview of The Walking Dead – 9×08 Evolution which is the mid-season finale.